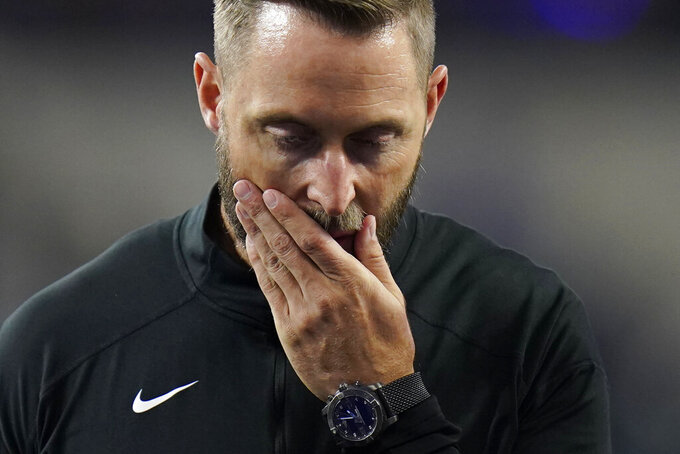 The two-month, slow-motion collapse of the Arizona Cardinals will no doubt cause some soul searching and tough questions in the coming days, weeks and months for the franchise.

The most obvious and pressing: Is this Kliff Kingsbury-Kyler Murray marriage really going to work or not?

The notion that Kingsbury could be on the hot seat or that Murray wasn't the right quarterback for the team's future would have been absurd just a couple of months ago, when the Cardinals were bulldozing through their schedule with a 10-2 record through Dec. 5.

But the Cardinals fell apart in a hurry. They lost four of their final five regular-season games and were utterly embarrassed in a 34-11 loss to the Los Angeles Rams in the wild-card round on Monday night.

“Losing is one thing, but when you don’t even make it competitive, it’s another thing,” Murray said.

Kingsbury was hired in 2018 as the man who could help nurture the development of Murray, whom the team took with the No. 1 overall pick of the 2019 draft.

They've had good moments together but Monday wasn't among them. Nothing Kingsbury called seemed to work and Murray had one of his worst games as a pro, completing 19 of 34 passes for 137 yards, no touchdowns and two interceptions.

Cardinals defensive end J.J. Watt called the season's ending a “massive failure" after the game and Murray agreed. Kingsbury was more measured with his words but basically echoed the same sentiment.

“We’ve got to be better,” Kingsbury said on Tuesday. “This league is about closing strong and building momentum into the playoffs. Unfortunately, we didn’t do that.”

Yes, it's true that the Cardinals made some progress by making the playoffs for the first time since 2015. But it's also true that the franchise usually looked totally overwhelmed and overmatched when the most important games came in December and January.

It's the second straight season that Arizona's regressed as the season's progressed. The Cardinals lost their final two games of the 2020 season to finish 8-8 and just miss the playoffs.

Arizona certainly faced its share of roadblocks throughout the season. Three-time Pro Bowl receiver DeAndre Hopkins was hurt for most of the last half of the season. Murray never looked the same after his sprained ankle midway through the season. Running back James Conner also struggled with injuries in the final month.

But just about every NFL team can point to similar problems during a long, physical season.

“Great teams find a way to push through (adversity) and come together and become better on the other side,” linebacker Jordan Hicks said. “As much as we tried to push through, tried to fight through it and figure out what was going on, we just didn't do it in time.”

Arizona's nosedive can be partially blamed on the absence of Hopkins, who missed most of the last half of the season with hamstring and knee injuries. He didn't play against the Rams on Monday.

Hopkins gave the Cardinals a vertical threat in the passing game they couldn't replace. Though everyone knows Hopkins is among the best players in the NFL, it was jarring to see how much his presence obviously meant. He led the team with eight receiving touchdowns even though he played just 10 games.

The Cardinals have spent a lot of their draft capital over the past few seasons on the middle of the defense, selecting linebackers Isaiah Simmons and Zaven Collins with their first pick each year.

Simmons played just 19 defensive snaps against the Rams in the playoff loss while Collins was on the field for just eight. The two are still very young and can improve, but that's not a great sign for two players that Kingsbury and general manager Steve Keim viewed as the future centerpieces of the defense.

While much of the Cardinals' core is under contract next season, there will be tough decisions about multiple players on the roster.

Conner made the Pro Bowl with a stellar season, including 18 touchdowns, and now the Cardinals have to decide if they want to invest in him long term. Receiver Christian Kirk, running back Chase Edmonds, tight end Zach Ertz and linebacker Chandler Jones are among the other big names set to hit the open market.

Ertz was brought to Arizona in a midseason trade with the Eagles and said he wants to come back.

“I've loved my time here in Arizona,” Ertz said. “I would love the opportunity to continue here. Obviously, there's a lot of things out of my control. We've got a lot of good players who are free agents, so it might not be even up to me.”

A tough night got tougher for the Cardinals when Pro Bowl safety Budda Baker was taken off the field on a stretcher following a helmet-to-helmet hit with Rams running back Cam Akers in the third quarter.

Baker — who was evaluated for a concussion — sent out a post on social media late Monday night saying “Thank you all for the prayers. I am doing good.” An Arizona media relations spokesman said Baker was kept overnight at a hospital in Los Angeles and released on Tuesday morning.

The team posted a photo Tuesday of him on a plane flying back to Arizona.