Raiders happy to return home from game against Lions 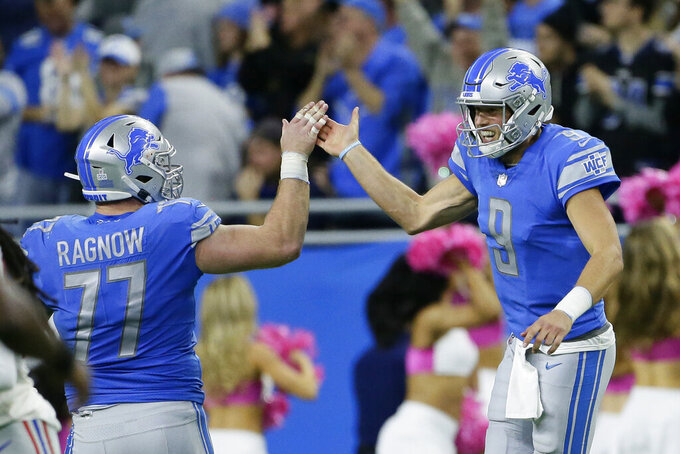 Detroit Lions quarterback Matthew Stafford (9) and center Frank Ragnow (77) celebrate after a play during the second half of an NFL football game against the New York Giants, Sunday, Oct. 27, 2019, in Detroit. (AP Photo/Duane Burleson)

OAKLAND, Calif. (AP) — The Raiders have taken nine long flights, traveled about 20,000 miles and overhauled the bottom portion of their roster since last playing a game at the Oakland Coliseum.

Having survived the nearly seven-week odyssey by winning two of five games to remain in the thick of the AFC playoff race, the Raiders (3-4) are excited to return for a three-game homestand that will determine how long they will stay in contention.

It all starts Sunday against the Detroit Lions (3-3-1).

"It's going to be rowdy, I know that," quarterback Derek Carr said. "I think our fans miss us, and I think we miss them. We need a home game. We need to see each other, that's for sure. We miss one another."

The Raiders opened the season with back-to-back home games then started off on their trip with games at Minnesota and Indianapolis, followed by a "home" game in London against Chicago, a bye week, and then trips to Green Bay and Houston.

It wasn't the easiest ordeal for coach Jon Gruden.

"I hope they do it to everybody in our division next year," he said. "I think everybody should have an opportunity to go on the road for six weeks. Somebody had a great idea for us to do it, I think everybody ought to do it next year. Honestly, it was tough. It was tough because they weren't close trips. They were overseas trips, they were across the country trips, every one of them. So, it was a challenge, but it allowed our team to bond and spend some time together and we benefited from it."

It's been so long between games that the Raiders have 10 players on their 53-man roster who have never even played a regular-season home game in Oakland.

Left guard Richie Incognito is particularly excited, especially after having a few run-ins with the fans in the Black Hole as a visitor, including one memorable one after a touchdown with Buffalo in 2016.

"I remember going to grab the running back and celebrating and everything getting launched out of the stands," he said. "Bottles and hats and everything. It felt good back then putting it on the Black Hole but now we want to play well, score a bunch of points and get those guys rowdy."

Detroit's Matthew Stafford has started 135 straight games, a streak that trails only the Chargers' Philip Rivers (216) among active quarterbacks and he is nearly a season of games ahead of Seattle's Russell Wilson on the list. Stafford moved past his friend, Matt Ryan, in Week 8 when Atlanta's quarterback ended his 154-game starting streak in the regular season because of a sprained ankle.

"It doesn't mean anything other than just I want to be available for those guys," Stafford said. "I was actually texting Matt last week, trying to figure out if he was going to go or not. I'm buddies with him. I wanted him to keep history going because I know he is a tough guy that has played through a lot in his career."

The strength of the Raiders this season has been the offensive line despite not playing an entire game with the starting unit. Left tackle Kolton Miller is the only starter to remain available all season with Incognito missing two games for a suspension, Gabe Jackson missing five with a knee injury, Trent Brown missing one entire game with a calf injury and center Rodney Hudson leaving with a sprained ankle last week after 10 plays.

Hudson isn't expected to play this week, but the Raiders have managed just fine. They have allowed only eight sacks all season, one off the franchise low through seven games, and have matched a team record by going three straight games without allowing a sack. Oakland also ranks seventh in the NFL in rushing and is averaging 4.8 yards per carry.

"We know we're a big physical group," Incognito said. "But to be able to do it week in and week out is special. We know if we keep Derek clean, he can pick people apart and that's what's happening."

Detroit has had players reach 100 yards receiving seven times this season, pulling off the feat in seven games for the first time in two-plus decades and just the second time in franchise history. Kenny Golladay has passed the century mark three times, including in the win over the Giants with 123 yards receiving and two touchdowns. Danny Amendola has a pair of 100-yard games for the first time since 2015. Marvin Jones, who caught four touchdown passes in a game, and rookie tight end T.J. Hockenson each have reached the 100-yard mark in one game.

"It seems like week in and week out somebody is doing it," Stafford said.

Receiver Tyrell Williams returned to Oakland's lineup after missing two games with a foot injury and caught his fifth TD pass of the season last week. Williams has a TD catch in every game this season but also missed out on some big plays late in the loss last week at Houston. He dropped one deep pass on Oakland's final drive of a 27-24 loss and had another that hit his hands get broken up by former teammate Gareon Conley.

Detroit did not trade two-time Pro Bowl cornerback Darius Slay before the deadline, ending speculation he would be moved. Slay made it clear on social media and in interviews that he was not happy when the team traded safety and captain Quandre Diggs, his close friend, to Seattle earlier this season.

Did he think his tweet and words would get him traded?

Slay also made it clear, before and after the deadline, that he didn't care if he was traded or stayed in Detroit.