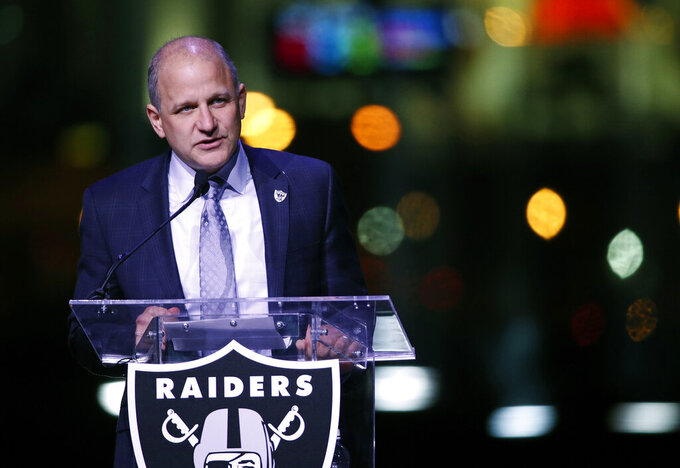 Raiders team president Marc Badain has resigned just before the start of training camp after helping orchestrate the team's move to Las Vegas.

Owner Mark Davis announced Monday that Badain is leaving the organization and that executive vice president and general counsel Dan Ventrelle will take over on an interim basis.

Badain went from being a ball boy for the team to a 30-year career with the organization. He eventually became the chief financial officer for the team and was an assistant to former CEO Amy Trask.

He took over as interim president in 2013 when Trask resigned and got the full-time job in 2015. He helped put together the stadium deal in Las Vegas that led to the team's move from Oakland last year into sparkling Allegiant Stadium.

Badain leaves before the stadium hosts a game with fans with the team playing before empty seats during the pandemic last year.

“The successful construction and operation of Allegiant Stadium has been unequivocally the most challenging part of my 30 years with the organization,” Badain said in a statement. “Seeing it through to the end has been rewarding beyond measure. Together the Raiders and Las Vegas accomplished what seemed impossible. Now that the project is complete, it is time for me to focus on my family and look ahead to new pursuits.”

Badain thanked Davis for his friendship and support and said he will always feel like he is a part of the organization.

“Marc has been an integral part of the Raider family For 30 Years rising from a training camp driver to president of the entire organization,” Davis said in a statement. “His efforts in helping to build the most magnificent stadium in the sports and entertainment capital of the world will never be forgotten.”

Ventrelle has spent 17 years with the organization and was a liaison with local officials in Nevada for the move and a lead negotiator on player contracts.