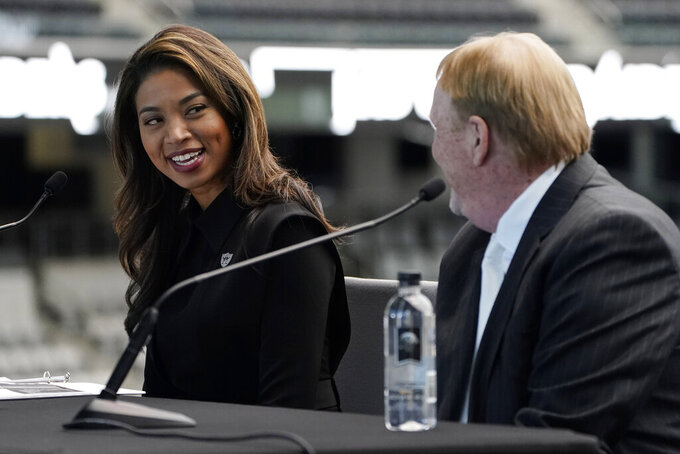 LAST YEAR: The Raiders survived a tumultuous season that featured the resignation of coach Jon Gruden and the release of receiver Henry Ruggs III to make the playoffs for the first time since 2016. That wasn't enough for interim coach Rich Bisaccia or GM MIke Mayock to keep their jobs as owner Mark Davis turned the franchise over to coach Josh McDaniels and GM Dave Ziegler. DE Maxx Crosby emerged as a star last season to help improve a struggling defense and QB Derek Carr led the offense to deliver some late-game wins. The Raiders won four OT games to get to the postseason before falling short at the end of the wild-card game at eventual AFC champion Cincinnati.

CAMP NEEDS: The biggest task for McDaniels in camp will be figuring out the offensive line where there are questions at every spot besides LT Kolton Miller. Andre James was adequate in his first season at center in 2021, but third-round pick Dylan Parham could get a look there or at guard. Last year's top pick Alex Leatherwood struggled in four games as a rookie at RT and was only a little better after moving to guard and needs to find a spot for this season. Denzelle Good is back from injury and could earn a starting spot with Brandon Parker, John Simpson and Jermaine Eluemunor also in the mix.

KEY CAMP COMPETITIONS: There should be a competition to determine the starters at cornerback this summer for the Raiders. Ya-Sin was acquired in a trade from Indianapolis and should have the inside track at one outside spot. Fourth-year CB Trayvon Mullen missed most of last season with injuries and had surgery again in the offseason, putting his status in question. Averett could push for that spot, along with 2020 fourth-round pick Amik Robertson, who struggled to gain the trust of the previous staff. Second-year player Nate Hobbs will start in the slot.

EXPECTATIONS: After adding Adams and Jones to a team that made the playoffs in 2021, the expectations are high in Las Vegas in McDaniels' first season. But the problem for the Raiders is their division is brutal and they overachieved last season by winning 10 games despite getting outscored by 65 points. But if the additions of Adams and McDaniels can make the offense elite and the defense does a better job creating turnovers, the Raiders could be in the mix.