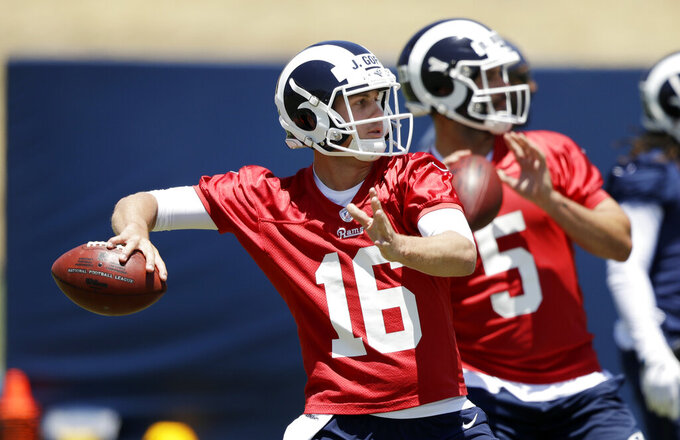 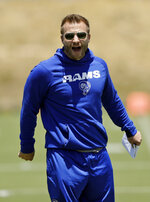 THOUSAND OAKS, Calif. (AP) — Marcus Peters is focused on what is happening in Miami, and the Los Angeles Rams defensive back insists it has nothing to do with the contract the Dolphins gave to cornerback Xavien Howard earlier this month.

Howard agreed to a five-year deal that includes $46 million guaranteed and could be worth $76.5 million, resetting the market with the most lucrative extension ever for a NFL cornerback just as Peters is set to play out the final season of his rookie contract on the fifth-year option.

But Peters said that he prioritizes a return trip to the Super Bowl, which will be played in the Dolphins' stadium next February, over getting his next contract settled.

"I want to get to the Super Bowl and win it this time, that's what I want to break, really," Peters said. "All of the rest of the stuff will take care of itself."

Peters repeated that phrase multiple times Tuesday after the Rams started the second week of organized team activities, refusing to discuss what he might want from his second contract.

However, it seems possible that Peters' starting point for a contract could exceed the terms of Howard's deal based on how the 2015 first-round draft pick has produced on the field.

Peters has 22 interceptions in four seasons with Kansas City and the Rams, compared to Howard's 11 picks over the past two seasons. Peters did finish with a career-low three interceptions this past season, his first in Los Angeles after being acquired in a trade with the Chiefs, though some of the drop in production could be attributed to a calf injury he sustained in Week 4 against the Chargers.

There was a clear downturn in Peters' performance following the injury, notably struggling to contain New Orleans wide receiver Michael Thomas in a Week 9 loss at the Saints. Thomas had 12 receptions for 211 yards in that game, including a 72-yard touchdown catch against Peters.

When the Rams and Saints played again in the NFC championship game, a healthier Peters responded by helping limit Thomas to four receptions for 36 yards. Coach Sean McVay praised Peters for how he bounced back in the playoffs and hopes it sets a template for how he can produce this season.

"One of the things that really says as much about Marcus as anything is the ability to overcome some adversity early on," McVay said. "He stayed the course. He took accountability and I thought he played his best ball towards the end of the year."

McVay hopes to get the most out of Peters by better featuring his "great ball skills, great instincts and awareness" in his second season in Los Angeles. Peters also expects to be more effective with a better understanding of defensive coordinator Wade Phillips' system and how the Rams structure their program.

"Everything is running smoothly now," Peters said. "You kind of understand the schedule, how everything is going to work. It just plays itself out now."

Peters has the same expectations when it comes to his contract, especially after McVay said in April when league owners held their annual meetings that he "absolutely" wants to have Peters sign a long-term deal with the Rams.

"The only thing I can do is come in and do my job and be the best teammate I'm doing, be the best player I can be on the field, and the rest of the stuff will take care of itself," Peters said. "I'm not too worried about it."

NOTES: RB Todd Gurley has yet to participate in on-field drills during organized team activities. "He's been an active participant, you know, following the program that we've implemented with him, and we're very pleased with where Todd is at right now," McVay said. ... DE Dante Fowler was not in attendance for Tuesday's workout after missing his flight back to Los Angeles, McVay said.