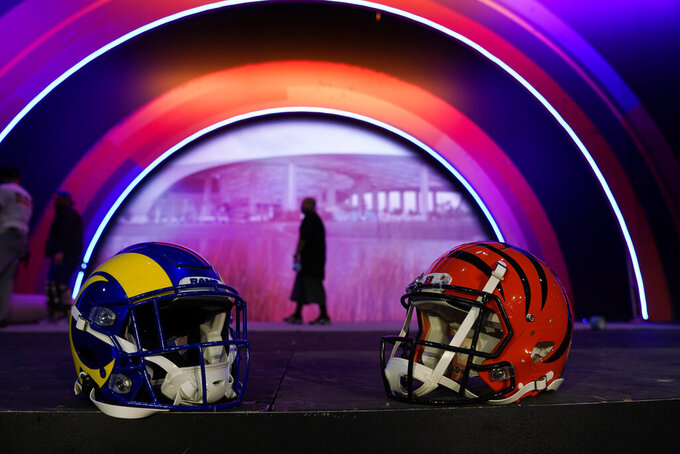 The Los Angeles Rams could get two former starters back from injured reserve in time for the Super Bowl.

Coach Sean McVay said defensive tackle Sebastian Joseph-Day and running back Darrell Henderson are expected to practice with the Rams this week, and there’s “a good chance” Joseph-Day and Henderson can play against Cincinnati.

“With both Bash (Joseph-Day) and Darrell, it is looking optimistic,” McVay said.

Other injury news wasn’t so upbeat Monday: Tight end Tyler Higbee probably won’t practice this week as he attempts to return from a knee injury from the NFC championship game, while backup left tackle Joseph Noteboom is still working back from a pectoral injury that occurred in LA’s playoff win at Tampa Bay.

“We’re just taking it a day at a time with those guys,” McVay said of Higbee and Noteboom. “They’re doing everything in their power to be available.”

Joseph-Day had surgery in November after injuring his pectoral muscle in October. The Rutgers product has been a starter alongside Aaron Donald for each of his three NFL seasons, and he already had 38 tackles with a career-high three sacks in just seven games this season.

Henderson started 10 games for the Rams this season and shared playing time in the backfield with Sony Michel before spraining his knee at Minnesota in December. He had a career-high 688 yards rushing this season with five touchdowns, but his absence was mitigated by the return of Cam Akers from a torn Achilles tendon for the regular-season finale.

Joseph-Day, Henderson and rookie cornerback Robert Rochell entered the 21-day window to return from injured reserve early in the postseason, giving them every opportunity to get healthy if the Rams reached the championship game. McVay was slightly less optimistic about Rochell’s availability from a chest injury, but he is eligible to practice.

A movie about the Rams’ journey to the Super Bowl this season would feature some well-known actors playing key roles on the big screen.

Well, if you leave the casting to the players, that is.

Los Angeles quarterback Matthew Stafford was asked by a reporter from “Access Hollywood” during the team’s Zoom interview sessions who would play him in a film about his life.

“That’s a great question. I have no idea,” a smiling Stafford said. “Umm, I’ll say Leonardo DiCaprio. He’s one of my favorites, a big-time actor, a special actor. I don’t know how he is at throwing the football, but with modern technology, I’m sure we could make it look good.”

“I don’t know if he’s as funny as him, but we’ll give him Ryan Reynolds,” Beckham said. “Or Ben Affleck.”

And who might be cast to play Beckham in this sure-fire Hollywood hit?

“I’m going to go with Will Smith,” he said. “He’s the GOAT. He’s the guy. I grew up on ‘The Fresh Prince (of Bel-Air).’ I literally copied his mannerisms leading into manhood. And it was kind of him — Will Smith — Martin Lawrence and Jamie Foxx. All three of those shows kind of made me who I am as a person.

“But if I had to pick one just to play me in a movie, I’m going to have to go with Will.”

Hashtag: Keep it to yourself.

Cincinnati Bengals quarterback Joe Burrow has 2.4 million followers on Instagram and more than 669,000 followers on Twitter, so he understands the reach and value of social media.

Burrow seems to trend all the time lately, especially for the sunglasses he’s wearing or his postgame bling. He’s active on the platforms, occasionally posting photos of himself with teammates after big games — such as celebrating the AFC championship victory — or with family members.

But he doesn’t post constantly, and he thinks that’s the way to go.

Burrow was asked during the Bengals’ Super Bowl media availability Monday on Zoom what advice he has for young athletes who have dreams of being successful pros like him. And not coincidentally, his response created lots of positive buzz across social media.

“Focus on getting better,” Burrow said. “Don’t have a workout and post it on Instagram the next day and then go sit on your butt the next four days and everyone thinks you’re working hard but you’re really not.

“Work in silence. Don’t show everybody what you’re doing. Let your performance on Friday nights and Saturday nights and Sunday nights show all the hard work you put in. Don’t worry about all that social media stuff.”

The seven-year NFL veteran says he has been fortunate to get to know part of his father’s family more after the death of his grandmother. He went to Hattiesburg, Mississippi, and learned more of his own father’s story of coming to the United States from Nigeria. Uzomah said he heard of the battles his father, and his grandfather, had to fight along the way.

Uzomah’s father earned an MBA while his son played in college at Auburn. Uzomah has had the best season of his career with 49 catches for 493 yards receiving and five TDs after a right Achilles injury ended his 2020 season.

“In sports, they say you had to overcome adversity,” Uzomah said. “Adversity in the sports world, what my father and his father had to endure, that’s true adversity, and that’s something that sticks with me and resonates with me. Oh man, I get to play the game that I love because of them and because of people, that’s my family’s heritage, people like them and people that have fought for this.”

Zac Taylor can talk for hours with authority about the X’s and O’s of football. The Bengals coach needs to punt when the topic of describing Joe Burrow’s “swag” comes up.

You know, like the quarterback’s flashy, tinted sunglasses that went viral after Cincinnati’s playoff victory over Las Vegas three weeks ago in the wild-card round.

“Yeah, I’m not really hip enough to answer that question for you,” Taylor said during the Bengals’ Zoom session with reporters Monday. “I think the other players in the locker room, my sons, you know, they probably could describe it better than I can. I couldn’t pull off, you know, the things that he wears. And that’s just, there’s no way that I’m hip enough to do that, but Joe Burrow can do it.”

Taylor said his young sons have even bought “the $10 version” of Burrow’s sunglasses.

“So that’s the impact he’s had on Cincinnati, I can promise you that.”

Cincinnati kicker Evan McPherson has a very modest way of celebrating despite making two of the biggest field goals in Bengals’ history.

Video games and water. Why? Well, it’s too late for sweet tea.

“I’m not going to drink sweet tea at 11:30 at night, whenever I get back from the AFC championship game,” McPherson said. “I will hop on the Playstation and play with my two ... brothers. That’s definitely something I did. The next day I definitely celebrated with a glass of sweet tea.”

That’s the preferred beverage for the rookie from Fort Payne, Alabama. He made the game-winning field goals in both the divisional round and the AFC championship game.

Decaffeinated tea and Gatorade could be options too. But at that time of night, the kicker who turned 22 last July keeps it simple.

The United States and Mexico men’s and women’s flag football teams played over the weekend, with both games decided in the final moments.

In the women’s game, Mexico was trailing 25-13, then got a pair of TD passes by Diana Flores, who capped the game’s scoring with a 12-yard rushing TD with 32 seconds remaining.

The friendlies were gold-medal game rematches from the 2021 IFAF Flag World Championships held in Jerusalem in December, which hosted a record 39 competing national teams across four continents. Both U.S. teams won gold there.

The U.S. and Mexico will compete among a field of 16 national teams at the World Games 2022 in Birmingham, Alabama, from July 7-17. The event marks the first time that flag football will be played at an international, multi-sport event.