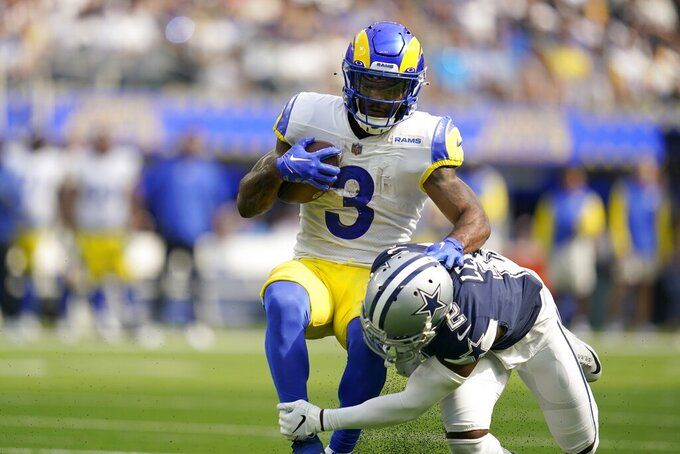 THOUSAND OAKS, Calif. (AP) — Based on the playful ribbing Cam Akers received Thursday in the Los Angeles Rams’ locker room, the running back’s teammates are clearly grateful he has rejoined them after a three-week absence.

Akers himself wasn’t in quite such a jovial mood, declining to explain exactly why he was away from the defending Super Bowl champions.

“I want to know the same thing. I don’t know what happened,” he said.

Akers returned to practice for his first on-field workout with the Rams since Oct. 12, when an apparent conflict with the coaching staff led to his separation from the team.

The third-year tailback from Florida State participated in all drills during the portion of practice open to the media, and the Rams (3-4) listed him as a full participant on the injury report. Offensive coordinator Liam Coen said Akers’ availability to play against the Tampa Bay Buccaneers on Sunday would be determined later in the week.

Akers had not been with the team for what was officially termed “personal reasons.” On Oct. 17, one day after the Rams beat the Carolina Panthers heading into their bye, coach Sean McVay said Los Angeles would attempt to trade Akers, its highest draft pick in the past half-decade.

But after the trade deadline passed Tuesday with no moves, Akers met with McVay on Wednesday, leading to his return.

“I told him I would love to be with the team, with these guys, with the coaches,” Akers said. “I told him I definitely wanted to make sure it was the right situation to me. That’s pretty much how it went. It was, obviously, a productive conversation. I’m here, so we’re gonna move forward.”

Akers said he never requested a trade, but it was discussed as “probably more of a mutual thing.”

As for why he was away from the team, Akers would not confirm he had a disagreement about the offense or his usage, something defensive coordinator Raheem Morris mentioned earlier in the day.

“We had a disagreement, Cam and our system, right? He stepped away from the building a little bit, and now you got to invite him back into the fold,” Morris said. “Sometimes you got to get away from tough situations, some adversities, to have that ability to come back and shine. Those two will make up their differences.”

McVay does not speak to reporters on Thursday. He will have his next media availability Friday.

Defensive tackle Aaron Donald and wide receiver Cooper Kupp, who are team captains, each said they were not aware of the reason Akers was away from the team, but were pleased to see him.

“He looked like he was in good spirits. To see Cam back out there, he had a smile on his face, so that’s good. So I’m ready to see him back working,” Donald said.

Kupp added: "He had great juice today out there, so glad to have him back, and that’s all I got.”

Akers has rushed for 151 yards and one touchdown on 51 carries this season, struggling right along with the rest of Los Angeles’ ground game behind a patchwork offensive line. The Rams rank second-to-last in the NFL in both yards rushing per game (68.4) and yards per carry (3.26).

Earlier in the season, McVay publicly mentioned he asked Akers for more urgency running the ball. Coen has said the Rams’ running backs must be more creative and more elusive.

Coen reiterated Thursday that the lack of production falls on everyone, from coaches to the running back to the offensive line.

“We have a revolving door up front, and multiple different running backs playing, and guys are a little bit nicked up,” Coen said. “These aren’t excuses. This is a reality. When you run the football, it takes all 11, and that’s something that we’re working through.”

Akers said he is ready to help if called on at Tampa Bay, which wasn’t a happy spot for him last season: He fumbled twice in the Rams’ thrilling rally to beat the Buccaneers in the divisional playoff round.

NOTES: C Brian Allen (knee) was limited in practice. … DT Greg Gaines and LB Ernest Jones did not participate because of illness. … Kupp (ankle) returned to practice on a limited basis after not participating Wednesday. The All-Pro wideout said he was encouraged by how he felt.