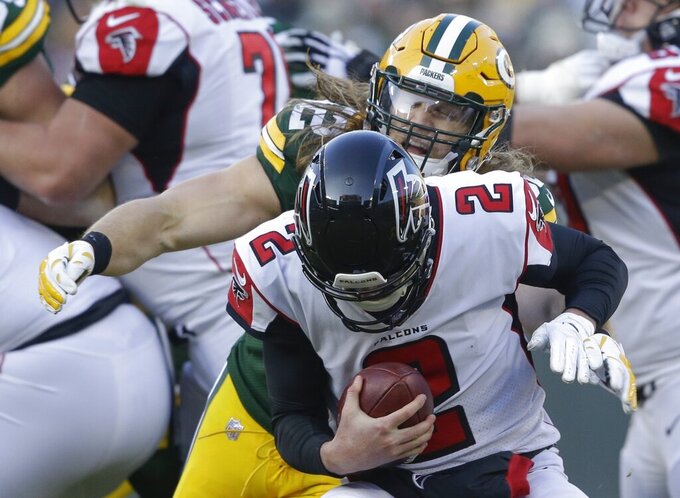 FILE - In this Dec. 9, 2018, file photo, Green Bay Packers' Clay Matthews sacks Atlanta Falcons' Matt Ryan during the second half of an NFL football game in Green Bay, Wis. Longtime Green Bay linebacker Matthews has agreed to a two-year contract with the Los Angeles Rams. The Rams announced the deal Tuesday, March 19, 2019, for Matthews, the former USC star who spent the past decade with the Packers. (AP Photo/Jeffrey Phelps)

LOS ANGELES (AP) — Linebacker Clay Matthews agreed to a two-year contract with the Los Angeles Rams on Tuesday, returning to his native Southern California after a decade with the Green Bay Packers.

The 32-year-old Matthews set the Packers franchise record with 83½ sacks over his 10 seasons in Green Bay. The former USC star earned six Pro Bowl selections and won a Super Bowl ring with the Packers, although his 3½ sacks last season were a career low.

Matthews went to high school in Agoura Hills, California, and he lives in nearby Calabasas with his wife and growing family. Both towns are a short drive from the Rams' training complex in Thousand Oaks northwest of downtown Los Angeles.

Matthews will contribute to the Rams' pass rush alongside All-Pro defensive tackle Aaron Donald and linebacker Dante Fowler, who re-signed with the NFC champions earlier this month. Nose tackle Ndamukong Suh is still a free agent after his sole season with Los Angeles.

Matthews played four seasons for the Trojans at the Coliseum, where the Rams will play next season before moving into their multibillion-dollar stadium complex in Inglewood in 2020.