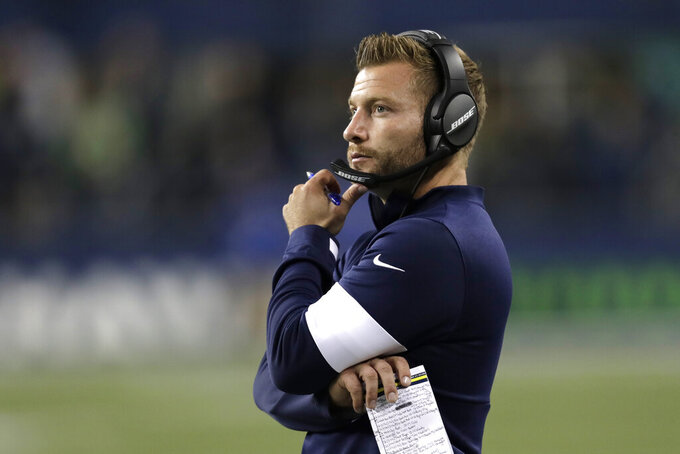 LOS ANGELES (AP) — Greg Zuerlein and the Los Angeles Rams missed a field goal and a redemptive victory by roughly the width of a football.

The narrowness of the Rams' 30-29 defeat in Seattle on Thursday night suggests it's not time for the defending NFC champions to panic. If the ultrareliable Zuerlein had come through on his attempt from 44 yards out with 11 seconds to play, Los Angeles would have a long weekend to enjoy a bounce-back victory and a 4-1 start despite a multitude of issues.

Instead, Zuerlein barely missed it wide right, leaving the Rams with three days off to think about falling to 3-2 and into third place in the NFC West with only their second losing streak during coach Sean McVay's tenure. The Rams aren't publicly worried about the long-term prognosis for their season, but consecutive losses to the Buccaneers and Seahawks have provided an early reality check they never received last year while starting 8-0.

"It's been a humbling last week," McVay said Friday. "But in this game, it's pretty incredible when you sit back and think about the amount of plays that occurred, and then for it to come down to one play, whether you're feeling pretty good or whether you're feeling like, 'Man, this is a little bit of a gut-check time for us.' That's why you just have to stay focused on the process, because sometimes those results can really change the approach, and I don't think ever one play can really define the way that you approach it, even though it could arguably be the difference between being 4-1 and 3-2."

The Rams responded to their first two-game skid under McVay late last year by winning four consecutive games, including two playoff contests, to reach the Super Bowl. Their relatively favorable upcoming schedule suggests they could reel off something similar — yet these Rams just haven't been as good as last season's team, even if they probably did enough to win in Seattle.

Both sides of the ball performed creditably against the Seahawks, who needed a variety of improbable plays — including Tyler Lockett's insanely difficult toe-tap TD catch , Tedric Thompson's remarkable one-handed interception and Russell Wilson's usual prestidigitation — just to force the Rams into that failed late drive for a winning field goal.

"We just didn't get it done, but it was a really good game," Todd Gurley said. "We're always going to stick together, no matter the outcome. That's why I like this team."

So while the Rams won't feel awful about their performance, they also realize the NFC West won't be won as easily as it was the past two seasons in which the Rams lost only one division game in which they played their starters. They'll get a chance to do something about that next weekend when the currently unbeaten 49ers visit the Coliseum.

But the Rams' task got a bit tougher with the loss of linebacker Clay Matthews, who broke his jaw in the final minutes in Seattle when Chris Carson inadvertently kicked him.

The Rams' unimpressive offensive line appeared to improve a bit, keeping Jared Goff upright without a sack and clearing space in the rushing game for 4.6 yards per play when McVay deigned to use it. The line also was called for just two penalties — both on its veteran tackles, not the youngsters — in noisy Seattle after struggling with discipline in September.

Gurley has just one 100-yard rushing performance in the Rams' last 10 games — none this season — after doing it nine times in Los Angeles' previous 15 games. He ran effectively early against the Seahawks, but his 51-yard, two-touchdown effort on 15 carries was no difference-maker.

Tight end Gerald Everett had the type of performance expected from a second-round pick , making seven catches for a career-high 136 yards. Undrafted rookie Troy Reeder also made the most of a chance to start at middle linebacker in place of injured Bryce Hager, leading the Rams with 13 tackles.

Zuerlein has been one of the NFL's most reliable kickers ever since the Rams moved home to Los Angeles, but he has missed three field goals inside 50 yards this season — including this game-decider — after missing just four from inside 50 in the Rams' previous three LA seasons combined. Greg the Leg is still golden, but he suddenly seems mortal, too.

Brandin Cooks is going through the concussion protocol, but the big-play receiver was asymptomatic on Friday, McVay said.

6: Matthews' total sacks in his first five games for his hometown team. The veteran linebacker got the only sack by either team in Seattle, but he is out for several weeks after Carson's foot accidentally broke his jaw with 3:20 left. Samson Ebukam will take Matthews' place in the starting lineup, while Dante Fowler will be counted on to increase his pass-rushing acumen.

The Rams will have extra rest and home-field advantage for an important divisional showdown with San Francisco next Sunday. A loss would knock Los Angeles down to .500 and put it in a deep hole in the divisional race, while a win would right the ship before a stretch with three straight games against struggling opponents.