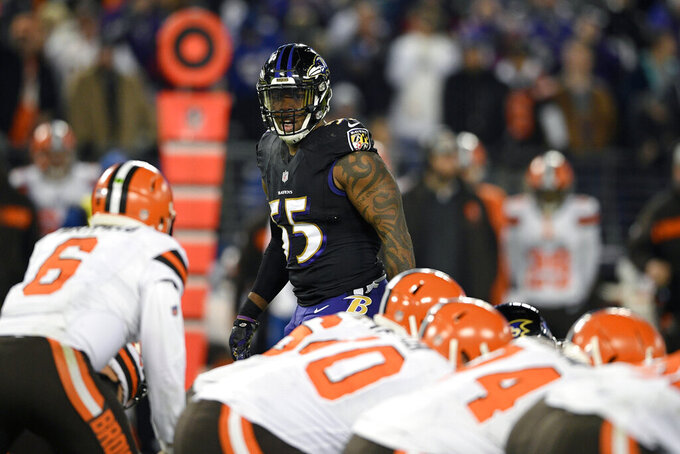 OWINGS MILLS, Md. (AP) — The NFL's top-ranked defense in 2018 will have a decidedly different look next season.

"The Jets just made such a powerful offer that as an organization it just didn't make sense for us," first-year general manager Eric DeCosta said Tuesday in an interview with The Associated Press. "We love C.J. and everything he brings to this club, but we've also got to build the best team we can. These are hard decisions we have to make."

DeCosta wanted to keep Mosley, but couldn't afford him.

"We stretched our budget, and we thought we made a compelling offer to him," DeCosta said.

When the NFL formally begins a new year Wednesday, Mosley will join the Jets; Smith will receive a four-year, $66 million with the Packers; and Suggs, the Ravens' career sacks leader, will launch the next chapter of his lengthy career in Arizona with the Cardinals. Weddle has already signed with the Los Angeles Rams.

In addition, the pending trade of quarterback Joe Flacco to Denver will be completed and unrestricted free agent receiver John Brown will join the Bills.

That leaves the Ravens, who broke a three-year hiatus from the playoffs in 2018, without several familiar faces.

"It's an opportunity for us to get younger," DeCosta said.

There wasn't much choice, given the large sum of money opposing teams waved at Baltimore's most notable unrestricted free agents.

"Unfortunately for us, the market is irrational at times and we can't be held responsible for what other teams want to pay," DeCosta said. "All we can do is try to negotiate in good faith with agents and the players."

It will be up to DeCosta to rebuild a defense that last season allowed 17.9 points per game, second lowest behind Chicago.

"We see good young players leave us every year," DeCosta said. "We've tried to adjust over time, but I think now is a great opportunity for us to become financially responsible, to get control over the salary cap to understand the concept of right player, right price."

The good news is, quarterback Lamar Jackson won't be due a new contract for quite a while.

"The cap goes up every year, and we're in a unique position because we have a quarterback who's in his rookie contract," DeCosta said. "We've been able to free up some cap room. We're trying to be as flexible as we can."

DeCosta's predecessor, Ozzie Newsome, held the post since the Ravens' arrival from Cleveland in 1996. It's been a whirlwind start for DeCosta, who still has plenty of time to fill out the roster.

"We're just starting out this offseason," he said. "As Ozzie used to say, 'We don't have to play games in March and April. We don't play until September.' I believe we'll have a good, competitive, hard-nosed typical Ravens team on the field when we start."