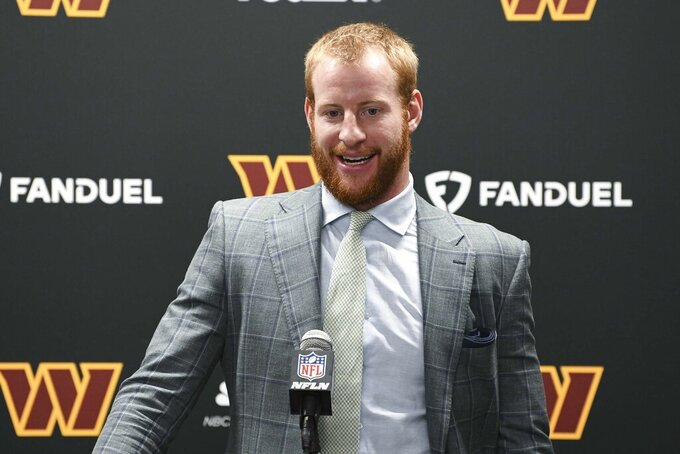 DETROIT (AP) — Ron Rivera knew how good his Washington Commanders had played in the second half Sunday. He also knew they had been abysmal in the first two quarters.

The Commanders trailed the Detroit Lions 22-0 at halftime, but pulled within 29-21 in the fourth quarter before losing 36-27.

“We started making plays in the second half,” Rivera said. “If we could have done that in the second quarter, this whole day might have been different.”

The difference between the halves was most obvious at quarterback. Carson Wentz struggled badly in the first half, completing nine of 17 passes for 59 yards while being sacked four times.

On one bizarre play, the Commanders tried a flea-flicker variant that gave Wentz a deep shot with Cam Sims in single coverage downfield. Wentz, though, misfired badly on the pass, throwing it several yards to Sims' right.

“I love that we were trying to be aggressive there,” he said. “That was just a really bad throw.”

In the final two quarters, Wentz was 21-29 for 278 yards and threw three touchdowns.

“At halftime, we talked about the fact that we don't have a 22-point play," he said. "We were going to have to take our time and start making plays. I'm very, very proud of the way we responded — we know that we're capable of playing that way — but we have to be consistent.

"This league is hard and we were horrible in the first half.”

Wentz wasn't perfect in the second half, though. The Commanders took the second-half kickoff and scored to make it 22-7, and Washington's defense forced a three-and-out.

The Commanders picked up 26 yards on two plays, moving the ball to the Detroit 47. But Wentz threw high across the middle for tight end Logan Thomas. The ball was tipped and Will Harris made a tumbling interception.

Thomas said he should have caught the ball, but Wentz didn't want to hear it.

He was also intercepted on a 2-point conversion attempt that would have brought the Commanders within six points at 29-23 with 10:44 left.

“They covered it well,” Wentz said. “We had a good play call, but the Lions didn't let anyone get open.”

The call was a little surprising, since kicking the extra point would have made it a seven-point game. Rivera has always been aggressive — he went for it on fourth-and-1 on his own 26 earlier in the drive — but he brushed aside a question about the decision.

Rivera might have had another concern on his mind, as kicker Joey Slye missed an extra point later in the fourth, but the coach said he still has full confidence in Slye.

Up next for Wentz is seeing a lot of friends when the Commanders play the Philadelphia Eagles on Sunday, but he doesn't expect it to be emotional.

Wentz played his first five seasons with the Eagles and was the starting quarterback in 2017, although a torn ACL caused him to miss Philadelphia's win in the Super Bowl.

He lost his starting job to Jalen Hurts in 2020, and was traded to the Colts, where he went 9-8 as a starter last season. Now he's back in the NFC East and playing the Eagles for the first time.

“I have to treat it as just another game,” he said. “I have great memories from my time with the Eagles, and I obviously understand the rivalry between Philly and Washington from being on the other side, but I have to put all that aside and just play football.”