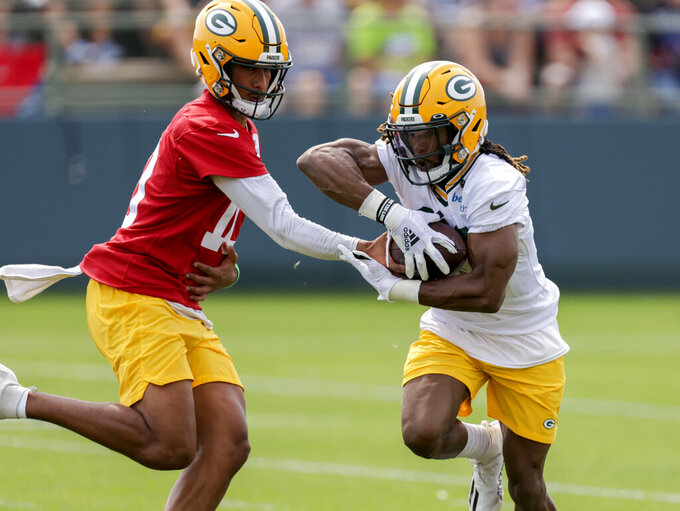 GREEN BAY, Wis. (AP) — Green Bay’s Jordan Love spent the offseason preparing as if he might be the quarterback of a Super Bowl-caliber team.

The Packers’ second-year quarterback is spending training camp instead tuning up for what might be his own version of the Super Bowl: the three-game preseason.

With Aaron Rodgers back for his 14th season as the starting quarterback following an offseason filled with drama and uncertainty, Love has settled into his role as Rodgers’ top backup.

Since the pandemic wiped out last year’s preseason games, Love is eager to sling the ball around for Saturday’s Family Night and the exhibition slate that begins Aug. 14 against the Houston Texans. He hasn’t played in a game since the Senior Bowl on Jan. 25, 2020.

“I’m super-excited,” the 2020 first-round pick from Utah State said after Thursday’s practice. “This is the moment I’ve been preparing for even since last year not having preseason. It’s almost like I’ve been training a year just for this first preseason game. I’m sure excited to get out there and get back to playing ball.”

Playing ball sure beats getting stuck in the middle of the NFL’s biggest offseason story line. Would Rodgers return for a 17th season? Or would he retire or force a trade, opening the door for Love to move into the starting lineup?

Love was in an airport on the way to Green Bay for training camp when he got his answer.

“It’s obviously very great to have Aaron back just on this team,” Love said. “Obviously, he’s a huge presence at the quarterback position and in the locker room, as well, and then as a leader on the team, so it’s great to have him back.”

With Rodgers skipping the entire offseason program, Love took the overwhelming majority of 11-on-11 reps during organized team activities and the minicamp.

The Packers had to get Love ready to go. Love needed to show he was worthy of leading a team that had reached back-to-back NFC championship games, even while knowing he might not get the opportunity.

“The whole time I had to convince myself that I was going to be the starter,” Love said. “That’s the only way you can look at that situation. I feel like if you don’t, you won’t be ready. That’s how I looked at it the whole way. In my head, he wasn’t coming back, I’ve got to get myself ready to be the starter.”

Having endured Brett Favre’s annual retirement considerations before taking over amid controversy in 2008, Rodgers knew what Love was going through, so he made it a point to keep Love in the loop. Love said he talked to Rodgers a couple times before and after OTAs.

“I didn’t want to ask too much about the situation,” Love said. “I know there was a lot going on in both of our worlds at that time.”

While the selection of Love was part of Rodgers’ beef with the franchise, Love’s presence has never been an issue for Rodgers. The two get along well, with Rodgers frequently offering advice to Love and the other quarterback, Kurt Benkert.

Love has soaked it in. He’s clearly a better quarterback now than a year ago, though inconsistency remains.

Sandwiched between nine consecutive completions on Thursday were a wobbling pass to the sideline that was broken up by second-year safety Vernon Scott, and an interception by undrafted rookie Christian Uphoff.

“Me and Aaron have a good relationship,” Love said before pulling a “Star Wars” reference. “Obviously, it’s kind of like the Master and the Padawan kind of thing. Just trying to learn as much as I can from him.”

NOTES: During individual drills, Rodgers threw a ball about 50 yards into a 2-foot hoop tucked into the back corner of the end zone. The crowd roared in appreciation. … Cornerback Jaire Alexander intercepted Rodgers’ Hail Mary to end a two-minute drill. … Tight end Josiah Deguara, who tore his anterior cruciate ligament against Atlanta on Oct. 5, made his training camp debut. … With Pro Bowl left guard Elgton Jenkins playing left tackle in place of injured All-Pro David Bakhtiari, Ben Braden and Jon Runyan Jr. have been taking the reps at left guard. Coach Matt LaFleur said those two and incumbent right guard Lucas Patrick will be competing for that job, as well. … Linebacker Kamal Martin didn’t practice due to the knee injury sustained Tuesday. … The Packers released Joe Fortunato, who was competing with incumbent Hunter Bradley at long snapper.