Russell Wilson a spectator as 'Hawks return from mini break 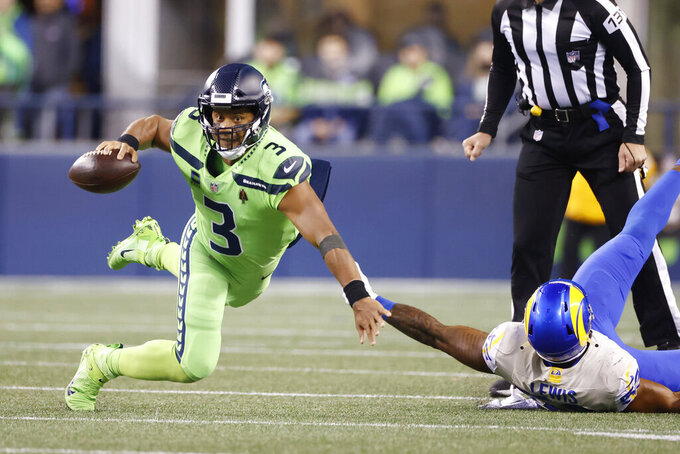 Seattle Seahawks quarterback Russell Wilson goes down as he tries to get a pass off against the Los Angeles Rams during the second half of an NFL football game, Thursday, Oct. 7, 2021, in Seattle. (AP Photo/Craig Mitchelldyer)

RENTON, Wash. (AP) — Until now, Russell Wilson has never missed a game and only on rare occasions been absent for a practice.

For the next few weeks, the sight of Wilson on Monday wearing a jacket and baseball hat while his teammates went through practice is going to be a regular sight for the Seattle Seahawks after their starting quarterback underwent finger surgery late last week.

Wilson’s surgery last Friday in Los Angeles repaired a ruptured tendon in what often is referred to as mallet finger, and a “fracture-dislocation” of the joint at the top of his middle finger on his right hand. The injury was suffered in the third quarter of Seattle’s 26-17 loss to the Los Angeles Rams.

Wilson has started all 165 games — regular season and playoffs combined — since being named the starter for the Seahawks before the start of the 2012 season.

“He’s in really good spirits and really active today as much as he can be around us and all that,” Seattle coach Pete Carroll said. “Really happy for the results of the initial part of it.”

Carroll said there is not a timeline on Wilson’s return and declined to even ballpark a potential target, although he is expected to play again this season. He said placing Wilson on injured reserve — which would keep him out at least three games — remains an option as that would open a roster spot for Seattle.

And that timeline could also make sense with Seattle having three more games before its bye week in early November.

Wilson had the finger heavily wrapped as he watched quarterbacks Geno Smith and Jake Luton go through early warmups during a light practice following the long weekend.

“He knows his job is to help Geno and get him ready,” Carroll said.

While Wilson is sidelined the job will turn to Smith, who hasn’t started an NFL game since 2017 when he was with the New York Giants. Smith’s start in New York was the game that Eli Manning saw his streak of consecutive starts end at 210.

Now Smith will be taking the spot of Wilson after 149 regular season and 16 postseason starts in a row.

The Seahawks were thrilled with how Smith played in the fourth quarter against the Rams once Wilson was ruled out.

Smith completed 10 of 17 for 131 yards and led two scoring drives. The lone blemish for Smith was a late interception with about two minutes left after his intended target on the play fell.

“I think there’s a lot of things that change in a young guy's mind when he gets this opportunity, but he’s been there a lot,” Carroll said. “It’s just been a while. ... He loves the fact that he’s got this chance to help his team. That’s why he’s been here. He’s been here for this opportunity when it does arise.”

NOTES: Carroll said LB Bobby Wagner suffered a bruised knee against the Rams. ... RB Chris Carson “had a big turn” in the neck problem that kept him out of last Thursday’s game. “We’ll see how it goes.” ... TE Gerald Everett was activated off the reserve/COVID-19 list. Everett was cleared last week, but not in time to play against the Rams. ... OL Ethan Pocic was designated to return to practice from injured reserve. He’d been out with a knee injury.