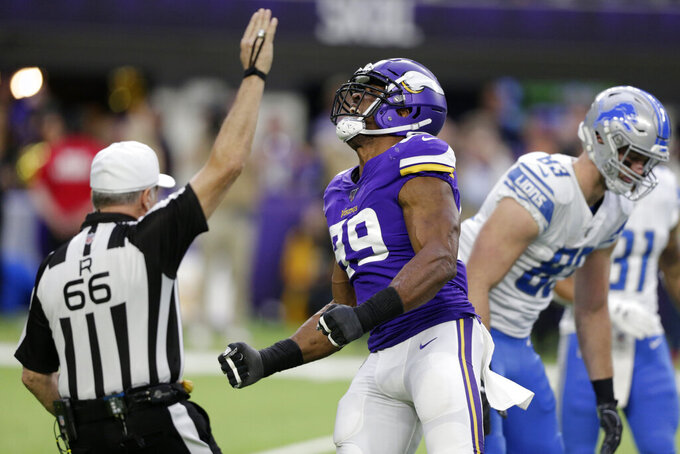 EAGAN, Minn. (AP) — After the Minnesota Vikings knocked down passes on Detroit's first two plays, Danielle Hunter crouched down in his three-point stance on third-and-10 with a tight end lined up to try to block him.

The Lions could hardly have found a faster track to punt. Jesse James had little hope of fending off Hunter long enough for quarterback David Blough to escape harm, and Hunter brought down the rookie for a 6-yard loss. On the next one of his three sacks in the first half on Sunday, tight end Logan Thomas was the initial blocker before right tackle Rick Wagner took a turn futilely attempting to prevent the takedown.

“It’s been happening a lot this year, but if you get that, you’ve got to win,” the fifth-year defensive end said after Minnesota's 20-7 victory over Detroit that was fueled by a resurgence by the defense.

Opponents are often concerned about the Vikings blitzing extra pass rushers, coach Mike Zimmer surmised, so they've been trying take their chances with a favorable matchup for Hunter with the goal of delivering the ball quickly enough that he can't wreak havoc with the play. That's usually picking between poisons, considering Hunter leads the league in quarterback pressures.

With 12 1/2 sacks this season, Hunter is tied for fourth in the league. Hunter, at 25 years and 40 days old, became on Sunday the youngest player in NFL history to reach 50 sacks, doing so 127 days ahead of Robert Quinn's arrival at that milestone in 2015 for the Rams. Hunter has 52 1/2 sacks, already halfway to third place on the franchise's career list. Carl Eller (130), Jim Marshall (127) and John Randle (114) have the first three spots. Hunter is already 24th among active players in the league, with Terrell Suggs (138) leading the list.

A native of Jamaica who was raised near Houston and drafted by the Vikings in 2015 in the third round out of LSU after an unremarkable college career, Hunter has more than affirmed the team's projections that an ideal frame, proven work ethic and humble attitude would translate to NFL success for the 6-foot-5, 252-pound physical marvel.

“Did we know he was going to have 50 sacks at 25 or something? No, but we felt like we could improve him as a pass rusher,” Zimmer said. “He had a tendency to run straight up the field and turn left as opposed to taking the proper angle, getting on the offensive tackle, using his hands and using his athletic ability.”

The only glimpses of flamboyance from Hunter are the karate-kick celebrations he performs after sacks, a tribute to actor Bruce Lee from the martial arts movies he watched often as a youth. Otherwise, Hunter is as unassuming as they come in the NFL. When asked about his record-setting performance against the Lions, he smiled at all the questions about accolades but never indulged.

“I definitely didn’t do it by myself. Teammates, coaches and all that, if it wasn’t for them, I wouldn’t be where I’m at,” Hunter said.

Not many players are blessed with his combination of size, speed and strength, but the preparation and dedication are what has set Hunter apart in the eyes of his appreciative teammates.

“That guy's a workhorse. I'm out here complaining like, ‘Oh, man, my shoulder kind of hurts, guys, my hands,’ and Danielle looks at me like, 'Bro, I played 80, 90 snaps. I'm not complaining,'" backup defensive end Ifeadi Odenigbo said, adding: “He's truly a professional. The team would be a lot better if there was more Danielle Hunters around.”