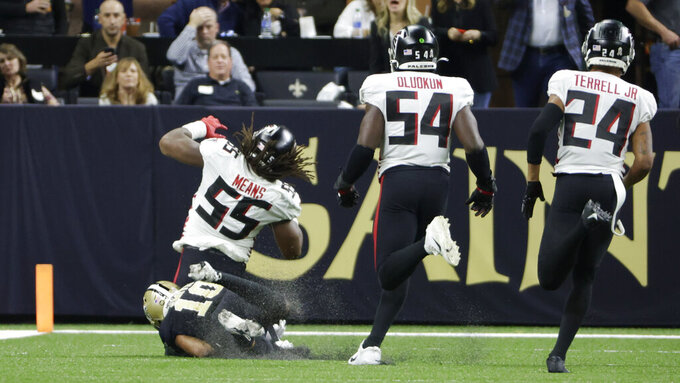 NEW ORLEANS (AP) — There were only so many mistakes the sloppy Saints could overcome.

And a new starting quarterback on the heels of Jameis Winston’s season-ending knee injury was the least of their problems.

New Orleans' offense had drives stall because of penalties, dropped passes and a costly turnover. Their defense gave up several big passing plays and third down conversions.

The result was an end to their three-game winning streak on Sunday and a missed chance to move into a first-place tie atop the NFC South.

After digging a 24-6 hole with 10:39 left in the fourth quarter, the Saints scored three quick touchdowns to take a brief lead, only to give up a deep completion down the sideline on the next play from scrimmage and lose 27-25 to Atlanta on Younghoe Koo’s 29-yard field goal as time ran out.

“It was self-inflicted wounds, penalties, some mishaps,” offensive tackle Terron Armstead said. “That’s really what it all boiled down to.”

New Orleans (5-3) missed a chance to draw even with the idle Tampa Bay Buccaneers after beating them 36-27 a week ago. The Saints dropped five passes in the first half, committed costly holding penalties and kept giving up huge plays to Falcons quarterback Matt Ryan, who threw for a season-high 343 yards.

Needing to prevent the Falcons from reaching field-goal range with a minute to go, the Saints allowed Ryan to find Cordarrelle Patterson deep in single coverage against rookie cornerback Paulson Adebo, who then missed the tackle as Patterson narrowly stayed inbounds and raced to the New Orleans 11 before safety Marcus Williams pushed him out of bounds.

The Falcons ran down the clock to 3 seconds before Koo’s game-winner.

The Saints earned their large deficit, failing to score on all four first-half possessions.

Center Eric McCoy was called for holding after the Saints reached the Falcons 26 — the first of three penalties that knocked them out of field-goal range on a first-half drive. Tight end Adam Trautman dropped a fourth-down pass from the Atlanta 36 the next time they had the ball.

New Orleans went three more series in the second half before its first touchdown.

“They played better than us today,” Saints coach Sean Payton said. “We didn’t do the things that winning teams do consistently in our league, and we’ve got to get that corrected.”

Atlanta led 10-0 after Ryan went 7 for 8 on a 92-yard drive right before halftime, converted three third downs with a scramble and two completions. He finished 23 of 30, including completions of 49, 39 and 34 before the last one to Patterson.

“Ryan did a good job of being efficient. It was hard to get them to make mistakes or get behind the sticks,” Saints safety Malcolm Jenkins said. “They made some great throws and great catches."

One more offensive mistake led to the Falcons’ final touchdown. Linebacker James Vaughters ran right around Armstead for a strip-sack of Trevor Siemian, and Steven Means returned it 32 yards to the New Orleans 6.

“It was just a really bad set,” Armstead said. “I read it wrong and didn’t put myself in position to win that snap. It was completely on me. Terrible.”

Ryan threw his second touchdown pass on the next play, giving the Falcons their 24-6 lead.

“Realistically as a team our margin for error is smaller obviously dealing with what we’re dealing with, but we were still more than capable of winning this game,” Jenkins said. “We put ourselves in position and didn’t come away with it.”