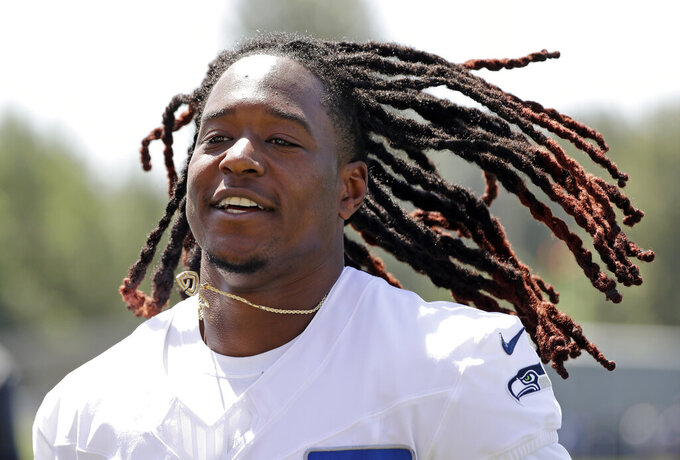 FILE - In this June 13, 2019, file photo, Seattle Seahawks' Shaquill Griffin runs off the field as his hair flies behind after practice in Renton, Wash. Griffin was so disappointed by his second NFL season he changed his entire offseason routine. Slimmer and faster, the Seattle Seahawks cornerback has been excellent through four games and will get another major test on Thursday against the Rams. (AP Photo/Elaine Thompson, File)

RENTON, Wash. (AP) — At the end of his second season, Seattle Seahawks cornerback Shaquill Griffin knew he had to make changes.

He was trying too hard. He weighed too much. He had clearly taken a step back after a promising rookie year.

Along with his brother Shaquem, Griffin significantly altered everything from his diet to his workout regimen during the offseason. He needed to be lighter and quicker if he was to fulfill the promise of being Seattle's next standout cornerback.

So far this season, the work seems to have had the desired effect. Griffin is slimmer. He is faster. And through four games he's playing at a level more in line with what he had expected after his first year.

"He looks really active; he's made consistent plays," coach Pete Carroll said. "You've seen him knock balls down kind of in consistent fashion almost week in and week out. Doing a good job on top, on the deep balls. He's playing great football, I think."

Griffin and the rest of Seattle's secondary have already faced a couple of difficult tests through four weeks. But Thursday night brings the toughest challenge to date when Los Angeles visits for a big divisional showdown, just days after Rams quarterback Jared Goff tied an NFL record with 45 completions and threw for 517 yards in a loss to Tampa Bay.

With the likes of Robert Woods, Brandin Cooks and Cooper Kupp, there's no doubt Seattle's secondary will be tested.

"We need to be involved in games like this. If you're going to have a good season, you've got to be able to match up and play these kinds of games and do a good job. I'm looking forward to it," Carroll said.

Griffin said the biggest and most important change he made during the offseason was dropping nearly 20 pounds. Griffin played last year at around 212 pounds but started this season around 195.

"It's still early, so I'm still doing different things to take care of my body the correct way," Griffin said. "But it feels good to be out there, to move the way I am, and as fast as I'm moving, and be able to keep my endurance up all at the same time. Last year, the weight that I was at, I would get so fatigued so fast and that's the part of my game that I took out."

Griffin was carrying some mental weight a year ago as well. With the departure of Richard Sherman after his rookie season, Griffin had to step into his mentor's role. He took the same spot on the defense as Sherman and with it came expectations of playing at that level. Instead of thriving, though, Griffin struggled.

He was rated near the bottom among cornerbacks around the league by some analytics. This year has been a bounce back so far.

Griffin has only three passes defensed — the same as Jadeveon Clowney — but opponents haven't thrown his way often. When they have, Griffin has avoided getting beat in the ways he was last year.

He's matured and the Seahawks are benefiting.