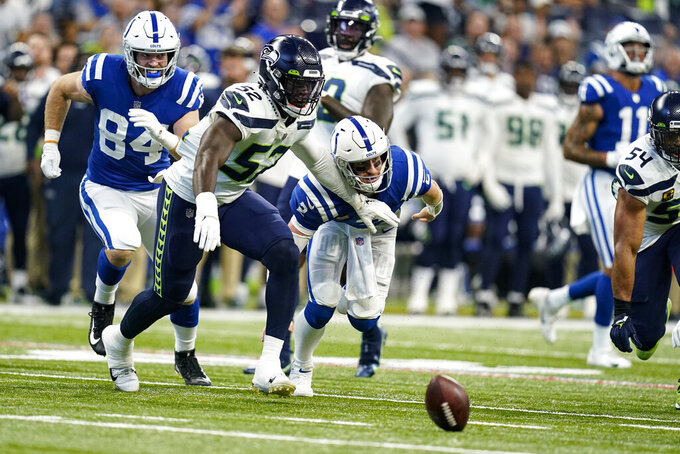 RENTON, Wash. (AP) — There might not be many, if any, big names on the defensive front for the Seattle Seahawks.

But one look at the stat sheet from Seattle’s season-opening win over Indianapolis shows the impact the Seahawks were hoping to see from their assembled rotation of linemen.

“We really feel like that’s the strength of our unit,” defensive coordinator Ken Norton Jr. said. “We have so many good players at that position that it’s important for us to really have a good rotation and keep everybody fresh and playing at a high level.”

When the Seahawks were struggling defensively through the first half of last season, it was in part due to the shortcomings of the defensive line, specifically problems getting to the quarterback. The performance changed when Seattle acquired Carlos Dunlap at midseason, but it still wasn't what the Seahawks needed for their defense to work at its best.

That’s why there was so much optimism over what Seattle did against Indianapolis in the opener. It wasn’t just one defensive lineman who contributed, it was seemingly all of them.

Bryan Mone, in his third season, was a menace in the middle with five tackles. Rasheem Green had perhaps his best day as a pro with four tackles, a sack and two pass breakups. Kerry Hyder Jr., Benson Mayowa and young pass rusher Darrell Taylor all had flashy moments that showed up on the stat sheet.

The one who had the least impact was Dunlap, although he sacked Carson Wentz on a 2-point conversion attempt that won’t get credited.

“This is a good-looking group,” coach Pete Carroll said. “We were really pleased with the pressure that we got throughout the ranks of the guys.”

Consider this stat from Pro Football Reference: the Seahawks brought safety Jamal Adams on a blitz 98 times in 12 regular-season games last season, an average of more than eight per game. It was part of the reason Adams set an NFL record for the most sacks by a defensive back and led Seattle with 9½ a season ago.

In the opener against Indy, Adams was credited with two blitzes. Seattle didn’t need the extra pressure because of the success of its defensive front.

Now the Seahawks get a Tennessee offensive line that was beaten up last week by Arizona, allowing six sacks and watching Derrick Henry manage just 58 yards rushing on 17 carries.

“It’s very elite, so many guys that can get after the quarterback and do special things,” Adams said after the win. “A rotation of really three fronts, you know what I mean? It can be really, really special.”

Carroll turned 70 on Wednesday, joking that not many people get to have prescheduled news conferences on their birthday. The oldest coach in the league said he's grateful for continuing to have the opportunity to coach in Seattle.

“I’m really grateful and appreciate where we are right now and this opportunity to be here and to work in this franchise for the Allen family and their support, the fans that we love to deal with. Everything about what we’re doing here is really just as good as I can hope,” Carroll said.

Seattle placed C/G Ethan Pocic on injured reserve with a sprained knee but Carroll said the team is optimistic it will only be a three-week stint on the IR. Pocic had lost his starting job to Kyle Fuller but was rotated in for a handful of series last week against the Colts. LB Jon Rhattigan was signed from the practice squad to take Pocic’s spot on the 53-man roster. ... RB Rashaad Penny (calf) did not practice Wednesday, raising concern over his availability this week. Carroll said Monday it seemed unlikely Penny would be able to play against Tennessee. ... WR Penny Hart was cleared to participate in practice Wednesday after leaving Sunday’s game due to a concussion. WR Dee Eskridge (concussion) was not cleared and not at the practice facility.