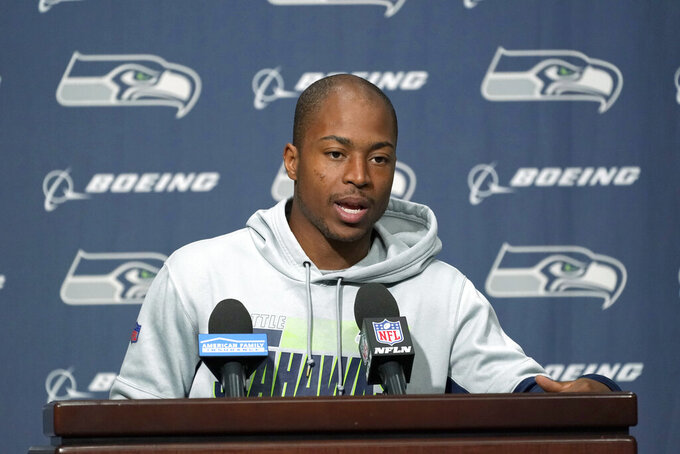 RENTON, Wash. (AP) — The Seattle Seahawks expect wide receiver Tyler Lockett to play Sunday against San Francisco despite a hip injury that slowed him in practice this week.

Coach Pete Carroll said Lockett was able to get some work Friday and should be to go against the 49ers. Lockett was tackled awkwardly in last Sunday’s game at Minnesota. The Seahawks felt fortunate Lockett did not suffer a more serious injury on the play.

“We rested him during the week and he got a bunch of treatment and he feels good,” Carroll said.

Seattle is banged up at wide receiver. Along with Lockett, DK Metcalf landed on the injury report with a sore foot but was not given a designation for Sunday’s game, indicating the Seahawks expect him to play.

Rookie Dee Eskridge was cleared earlier this week from the concussion he suffered in Week 1, but was listed as doubtful against the 49ers.

“He had a really good day yesterday in practice, but we don’t know that it’s right to bring him back yet,” Carroll said.

Seattle expects to be without tight end Gerald Everett, who is on the reserve/COVID-19 list. Carroll said Everett is vaccinated and is asymptomatic, but has not been able to return a negative test. Everett could be activated from the list if he returns two negative tests 24 hours apart.

Carroll praised the Seahawks' testing plan for keeping the COVID-19 situation isolated to one player so far. Seattle has been testing vaccinated players on Mondays and Wednesdays and it was the Wednesday test that provided Everett’s positive result.

“Our guys are appreciative of how we’re handling it, because they realize what would have happened had we only been testing like the league wanted us to test on Mondays. So we’re very fortunate,” Carroll said.