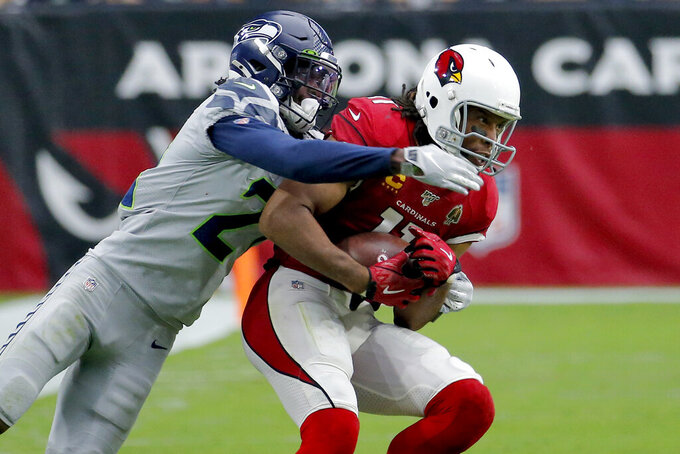 RENTON, Wash. (AP) — It took a trip to the desert for the Seattle Seahawks to find the blueprint coach Pete Carroll was seeking.

Lean heavily on the running of Chris Carson, who rushed for 104 yards and didn't fumble. Allow Russell Wilson to orchestrate without having to carry the entire weight of Seattle's offense. And get a few big plays from the Seahawks defense, including a touchdown from one of their new stars.

The 27-10 romp over Arizona on Sunday played out in nearly the exact fashion Carroll would like to see.

But how much can be taken from beating up on the weak link of the NFC West, or for that matter any of Seattle's results from its 3-1 start?

That changes on Thursday when the Los Angeles Rams visit in a major division showdown that could have ramifications come December and possibly January.

"It's a solid start. There are a lot of teams in the same position we're in so we haven't separated from anybody, which is hard to do at this time," Carroll said. "It's a good solid start and with one lousy outing that we gave a game away to a really good team. I like where we are at this point I like this matchup as we're kicking into the second quarter of the season and here we go. We'll see what happens."

The connection between Wilson and tight end Will Dissly is surprisingly effective. Dissly was known more as a blocker coming out of college at Washington, and he struggled a little with his pass catching in his rookie season before suffering a major knee injury. But he might be Wilson's favorite target not named Tyler Lockett. Dissly had seven catches on eight targets and grabbed his fourth touchdown of the season against the Cardinals. Add two catches for Luke Willson and Seattle's tight ends caught nine of the Seahawks' 22 completed passes.

"He's earned everything. He's worked for everything and he's a tremendous guy, tremendous player, tremendous teammate and that was big," Wilson said. "I was happy for him for sure."

Wilson continues to be sacked at a rate higher than Seattle would like. The Seahawks kept their quarterback clean on 50 pass attempts last week against New Orleans, but for the third time this year he was sacked four times by the Cardinals. Only Marcus Mariota, Deshaun Watson and Kyler Murray have been sacked more than Wilson through Week 4.

Jadeveon Clowney finally popped. Since acquiring him right before the season opener, the Seahawks had been waiting for a memorable moment from their new defensive end. It came late in the first quarter on Sunday when Clowney reached out his left hand and intercepted a screen pass, returning it 27 yards for a touchdown to give the Seahawks a 10-0 lead. It was the early boost Seattle needed.

"I told you he looked like 7 feet on that play," Seattle linebacker Bobby Wagner said. "Maybe it was just because of nerves going in. That was a big play in the game. He tipped it to himself and ran it back, showed a little speed."

Rookie DK Metcalf has disappeared a bit over the past two games. After two big weeks to start the season, Metcalf has just three catches over the past two games. One of those receptions came on a jump ball at the end of the first half in Week 3 against New Orleans and went for 54 yards, meaning his other two catches have gone for a combined 19 yards. Seattle has seen Jaron Brown and Malik Turner both get a few more targets the past couple of weeks, along with David Moore's return from an arm injury.

Carroll said he hopes backup running back Rashaad Penny (hamstring) will be able to play against the Rams after missing the past two games. Penny's best career game to date came last year against the Rams when he ran for 108 yards and a TD. While Penny's return would be a boost, the more important news was Seattle getting out of Arizona without any major injuries after recent trips where the Seahawks suffered some significant injuries in the desert.

Zero — With all the attention on Carson's fumble problems through the first three weeks, the fact he avoided coughing up the ball while also rushing for more than 100 yards was a major accomplishment. Carson's performance was reassuring for himself and the Seahawks.

It doesn't get much bigger for Seattle than an early-season showdown against the Rams. Los Angeles has won three of its last four trips to Seattle. While San Francisco remains unbeaten, the winner on Thursday gains a significant advantage in the NFC West race.