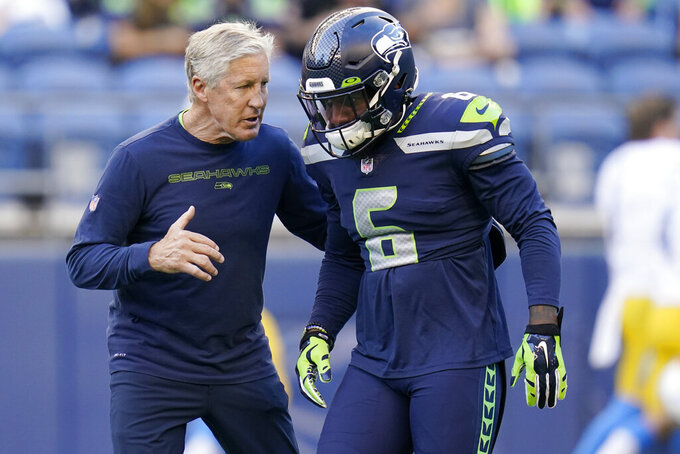 RENTON, Wash. (AP) — Seattle safety Quandre Diggs said Tuesday he’s not making a statement by choosing to be a spectator during Seahawks’ practice for the past week.

But he made clear that he intends to be back on the practice field well ahead of Seattle's season opener at Indianapolis on Sept. 12.

Diggs never fully clarified what he’s seeking from the Seahawks, but it’s not believed to be financial changes to his contract. The Seattle Times reported Diggs is seeking an insurance policy to protect against injury.

Diggs said he had productive conversations with coach Pete Carroll and that he expected to be back practicing soon. Carroll said last week Diggs was “making a bit of a statement.”

“The little business thing that I got to do, as soon as it’s done — signed, sealed, delivered — I’ll be back at practice,” Diggs said. “I wouldn’t call it a ‘hold-in.’ I would say I’m just getting some things cleared up and I’ll be back out with my teammates pretty soon.”

It’s been a training camp with a handful of key players for Seattle making statements about what they’d like from the team. Jamal Adams didn’t participate in practice until his four-year contract extension was signed making him the highest paid safety in the NFL. Left tackle Duane Brown still has not taken part in practices as he seeks contract concession from the Seahawks entering the final year of his current deal at age 36.

Diggs is also going into the final year of his current contract. He’s slated to make $5.95 million in base salary with another $100,000 in per game roster bonuses.

When asked if he was seeking adjustments to his contract Diggs said, “it’s more of a personal thing.” But he also said he would have liked to get a contract extension beyond this season.

NOTES: Seattle still had not finalized the trade for CB Sidney Jones from Jacksonville on Tuesday so the Seahawks have just 52 players on their roster after final cuts. Seattle sent a sixth-round pick to the Jaguars. ... CB D.J. Reed said he’s been moved to left cornerback after playing on the right side for all of training camp. Reed played multiple cornerback positions last season. He missed time in training camp due to a hip strain.