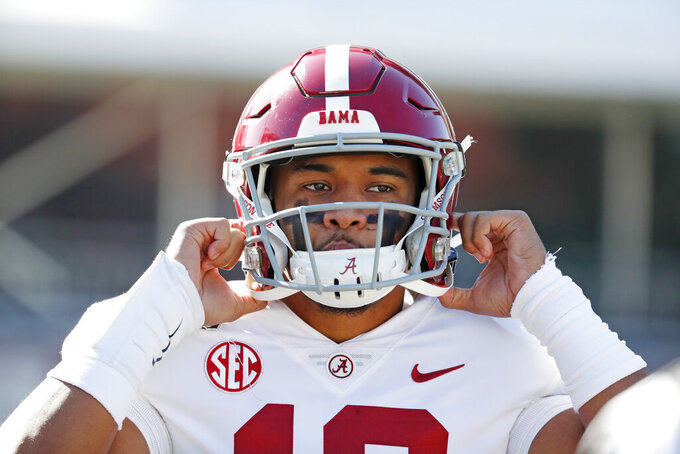 FILE - In this Nov. 16, 2019, file photo, Alabama quarterback Tua Tagovailoa (13) adjusts his helmet before an NCAA college football game against Mississippi State in Starkville, Miss. The Washington Redskins could shock everyone and take Alabama’s Tua Tagovailoa either second overall or after trading down at the NFL Draft. (AP Photo/Rogelio V. Solis, Fle)

GAINESVILLE, Fla. (AP) — The Southeastern Conference is expected to shatter two of its own NFL draft records.

The football powerhouse could have as many as 16 players selected in the opening round Thursday night, a number that would top the previous mark of 12 the league set in 2013 and matched four years later. The SEC also could break its record of total guys drafted (64) set a year ago.

The SEC’s most promising crop to date is flush with players from Alabama and LSU, and includes the reigning Heisman Trophy winner and next-level starters — maybe even stars — at nearly every position.

“I think we’re all aware of that and aware that’s not going to stop anytime soon in terms of how strong the conference is," said Atlanta Falcons coach Dan Quinn, who spent two years (2011-12) as an assistant at Florida. "Everybody talks about the whole Power Five in general. The fun part in scouting, they may get a lot in terms of the first-day stuff, but there are guys from all over. ...

"The SEC may lead the way early, but there will be good players selected in a bunch of rounds.”

No doubt. But could the heavyweight league really have as many players drafted in the first round as the rest of college football combined? Oddsmakers list the over/under at 15½, with the under (minus-165) being the favorite. A $100 bet on the under would yield a $160 payout.

Here’s a look at the conference’s potential first-round picks, including the ones who could help gamblers cash in on the over (plus-125):

LOCKS (in order of expected selection)

—QB Joe Burrow, LSU: Heisman winner and national championship game offensive MVP as much of slam dunk at No. 1 as Andrew Luck in 2012.

“Because he's had so much success, he doesn't give up on a play," ESPN college football analyst Kirk Herbstreit said. “In the SEC, he got banged up. In the NFL, he'll get destroyed. He knows that, and that's going to be an area he's going to have to really work on to fine-tune.

“But I'm telling you, man, this kid's accuracy, his touch, his intangibles, there's a lot there to fall in love with.”

—CB CJ Henderson, Florida: Has athleticism and ball skills to be as good as Ohio State’s Jeff Okudah.

“Everybody knows about the speed, but I think what people lose sight of is this kid has got natural hands,” NFL Network analyst Daniel Jeremiah said. “He has outstanding hands.”

—OT Andrew Thomas, Georgia: Three-year starter for Bulldogs will be plug-and-play guy at next level.

—LB/DE K’Lavon Chaisson, LSU: Could go higher considering there are so few edge rushers projected in first round.

—LB Patrick Queen, LSU: Expected to be one of four Tigers defenders drafted in first round.

“He can fly to the football and is perfect for the way the game's played now,” Kiper said.

“The inconsistency has to be eliminated,” Kiper said.

—S Xavier McKinney, Alabama: At least two safeties drafted in first round in each of past four years.

—DE Terrell Lewis, Alabama: Someone might take opening-round chance on talented edge rusher who has some durability concerns.

“The pass-rush ability is real,” Kiper said. “He can have his hand on the ground, play in space on his feet.”

—C Lloyd Cushenberry, LSU: At least one center has been drafted in first round in four of past five years.

“They have so many guys there," ESPN draft analyst Todd McShay said of LSU. “Clearly, as a national championship team, they've got a lot of talent.”