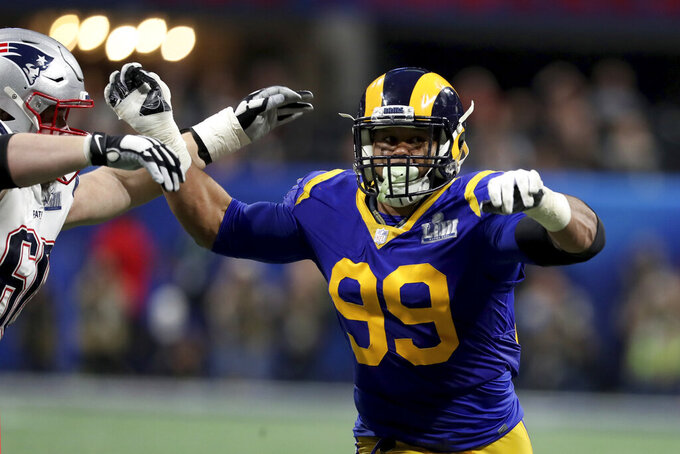 FILE - In this Feb. 3, 2019, file photo, Los Angeles Rams Aaron Donald (99) rushes against the New England Patriots during NFL Super Bowl 53 in Atlanta. Two-time reigning defensive player of the year Aaron Donald is always searching for out-of-the-box ways to improve his game. That's why the Rams defensive lineman trained with knives again this offseason. That's right, knives, of the plastic variety, of course, in order to improve his eye-hand coordination. His real driving force? That loss to the New England Patriots in the Super Bowl last February. (AP Photo/Gregory Payan, File)

To stay a cut above the competition, Aaron Donald again trained this offseason by dodging knives.

Fake blades, of course. But the results from the reaction exercises have certainly been real.

The two-time reigning AP defensive player of the year for the Los Angeles Rams is always searching for out-of-the-box ways to take his game to another level. The sting of a 13-3 Super Bowl loss to Tom Brady and the New England Patriots in February helps him stay sharp, too. That's one reason the defensive tackle attended organized team activities this spring for the first time since 2016, even as other veterans passed on the workouts.

Anything to earn that ring.

"The main goal is to be the No. 1 team standing and call yourself a champion," said Donald, who skipped workouts the last two springs while dealing with contract negotiations before signing a $135 million, six-year extension last August. "So I'm just working, trying to get myself better and continue to improve my game."

Donald is coming off a season in which he recorded 20½ sacks.

So yes, Donald has given thoughts to former New York Giants standout Michael Strahan's 22½-sack season in 2001, which is the NFL record since it became an official stat in 1982.

And no, he doesn't chase after it.

"If you would've asked me five years ago if I would have an opportunity to have 23 sacks in one season, I would've laughed at you and said, 'That's impossible,'" Donald said in a phone interview as the player known for his quick bursts to the QB embraces National Runners' Month at DICK'S Sporting Goods. "You would like to accomplish something like that, but in the mix of doing your job and helping your team win you play at a high level. So all that's going to come about on its own. Because the more you think about it, the less success you have.

"Go out there and play and let the game come to you, and good things come from that. It's worked for me so far."

All he's done is become a nightmare assignment in the middle since the Rams drafted him with a first-round pick in 2014 out of the University of Pittsburgh. Donald, who turned 28 on Thursday, is listed at 6-foot-1, 280 pounds — not the usual measurements for a dominating inside presence.

And yet dominating is what he's been against the run and chasing QBs. With his speed, strength and athleticism, he's become the NFL prototype.

"You open up doors for the next guy, who opens up doors for the next," Donald explained. "You do your job and do it at a high level and keep working and do what you're supposed to do, everybody has an opportunity to do great things. Just got to have that mindset and that will to want to do it."

Over the offseason, he again used the fake knives to help him improve his agility. His trainer would lunge at him with a blade in each hand and Donald knocked it away — just like he would the arms of an opposing offensive lineman.

"Trying to work on my hand speed and reaction," Donald said. "I go through different things in my training to think outside the box. Think of things that can help me. Just trying to outwork myself every year to be better."

Next up, distance running. Well, maybe.

Although his training is built around short distances, he's contemplating a 5-kilometer (3.1 mile) race down the road, especially after meeting a group of kids as part of Girls on the Run, an organization that teaches young girls life skills through running activities. Donald surprised them at a DICK'S Sporting Goods store in the Los Angeles area and helped them line up new running gear.

Donald even went for a little jog with the kids.

"Just trying to keep up with the girls," said Donald, who recently made a seven-figure donation to the University of Pittsburgh's Football Championship Fund. "I have 10-yard bursts in me. That (5K race) would be tough. Got to have a lot of stamina and training. I'll probably get it done."

An endeavor for later.

These days, it's all about leading the Rams back to the Super Bowl. They lost a defensive showdown with the Patriots in a game in which Donald had five tackles and one quarterback hit. He showed up at the offseason workouts, relishing the chance to develop even more cohesion with teammates.

"Being there and working with these guys, pushing these guys and getting these guys ready, it's only going to make us better," Donald said. "We're pushing each other, because we want to do something special this year."