Steelers WR Diontae Johnson hopes injury woes are behind him 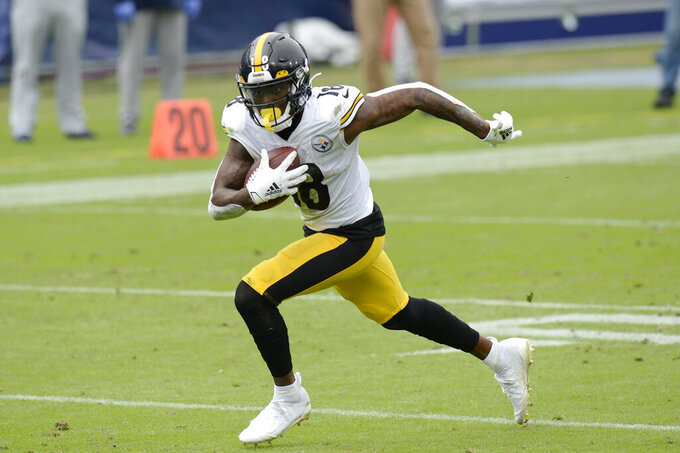 Pittsburgh Steelers wide receiver Diontae Johnson (18) scores his second touchdown of the game against the Tennessee Titans in the first half of an NFL football game Sunday, Oct. 25, 2020, in Nashville, Tenn. (AP Photo/Mark Zaleski)

The Pittsburgh Steelers wide receiver slipped between defenders and stretched to turn a third-and-7 into a first down for his ninth and final catch in the waning minutes of last Sunday's 27-24 victory over Tennessee that pushed the Steelers to 6-0 for the first time in 42 years. Yet rather than jogging back to the huddle, Johnson remained face-down on the turf, his right leg throbbing.

And so it goes for the talented but seemingly perpetually knicked up Johnson.

The team's leading receiver a year ago has quickly developed a rapport with quarterback Ben Roethlisberger when he's healthy, emphasis on “when.” While Johnson eventually made his way to the sideline and expects to be ready when Pittsburgh faces rival Baltimore (5-1) on Sunday, he admitted he's tired of spending so much time talking to athletic trainer John Norwig.

“It’s frustrating,” Johnson said. “It’s a part of the game. Just got to know how to handle it. You can’t just let it beat you down and whatnot. You’ve got to have a strong mind throughout everything.”

That's something Johnson has been forced to rely on regularly over the last 10 months. Taken in the third round of the 2019 draft, Johnson found a way to be productive even as Pittsburgh's passing game frequently stalled with Roethlisberger out for most of last season due to right elbow surgery. Johnson's 59 receptions led the team and his 12.4 yards per punt return was the best in the NFL.

“Diontae is as talented as any player we’ve had here,” offensive coordinator Randy Fichtner said, high praise considering the Steelers had perennial All-Pro Antonio Brown at their disposal for most of the 2010s. “He’s very skillful and, obviously, you know how exciting and electric he is when he has the ball in his hand. We’ve seen that in punt returns, we’ve seen that in open grass, catch-and-run situations. You’ve also seen it when he’s been asked to be used as a runner. I think, again, durability and availability are always going to be key.”

And that's been the difficulty for Johnson in 2020. He underwent surgery after his rookie season to fix a sports hernia only to injure his calf early in training camp. He left a victory over Houston with a concussion but recovered in time to face Philadelphia, only to exit in the first quarter after getting drilled in the back on a punt return. He was dynamic against the Titans — showcasing his sticky hands and ability to thrive in small spaces by scoring a pair of touchdowns — and still ended up hobbling to the locker room afterward.

When Johnson is in the lineup, the Steelers have a deep set of skill players at Roethlisberger's disposal, a group that includes JuJu Smith-Schuster, breakout rookie Chase Claypool, James Washington and tight end Eric Ebron. That group will be tested against Baltimore's excellent secondary, led by Marlon Humphrey and Marcus Peters.

“Just because we're young, I wouldn’t say we’re not going to give them competition and whatnot,” Johnson said. "We got a lot of playmakers on the offensive side. We’ve shown we can play against anybody we go up against.”

NOTES: DL Chris Wormley (knee), a former Raven who signed with the Steelers in the offseason, will not play Sunday. LB Ulysses Gilbert (back) and S Jordan Dangerfield (quadricep) are also out. ... CB Mike Hilton (shoulder) and FB Derek Watt (hamstring), both of whom missed last week's game in Tennessee, are questionable.