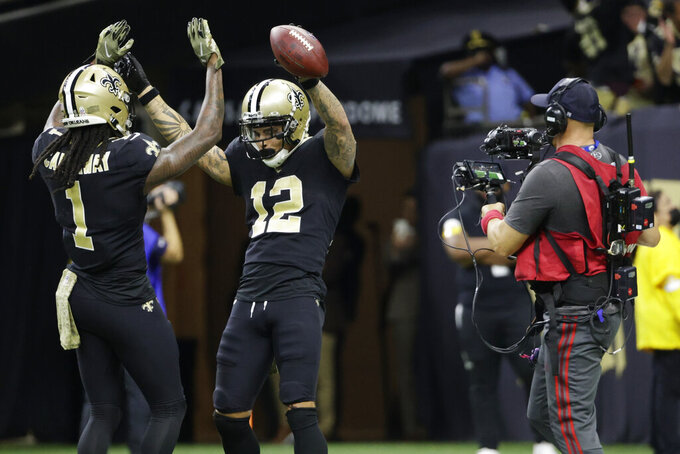 NASHVILLE, Tenn. (AP) — Mike Vrabel dismissed the idea of talking to his Tennessee Titans about playoff seeding and home-field advantage in the playoffs with a succinct response.

His approach stays the same even if the Titans (7-2) have the NFL's longest active winning streak at five to sit atop the AFC halfway through the season. Better yet, the last four victories have come against playoff teams from last season, with each bigger than the last.

“Not going to change anything,” Vrabel said.

Tennessee has a chance Sunday against the New Orleans Saints (5-3) to add another 2020 playoff team to its streak. The Titans still are adapting to life without Derrick Henry, who's still the NFL's leading rusher even after a week on injured reserve, and coming off a 28-16 win in Los Angeles over the Rams.

New Orleans is working through replacing quarterback Jameis Winston. Trevor Siemian, who spent time with the Titans last year, had the first crack last week with Taysom Hill getting some spot duty in his return last week in a 27-25 loss to Atlanta that snapped the Saints' own three-game winning streak.

The Saints also come into this game second in the NFC South, trying to stay close to Tampa Bay after their big win over the defending champs.

“We have the Titans this week, and those are the details we are focusing on,” Saints linebacker Demario Davis said. “We do not have the luxury of worrying about anything else."

The Titans are 6-0 this season against 2020 playoff teams, beating the Bills, Chiefs, Colts and Rams over the past four weeks. A win Sunday would make the Titans the second team in NFL history to win five straight against playoff teams from the prior season, something only the 2003 Eagles managed.

The Saints aren’t far behind. New Orleans is 4-0 against 2020 playoff teams, having beaten Green Bay, Washington, Seattle and Tampa Bay.

While New Orleans boasts the NFL's No. 1 run defense and Henry is out with a broken right foot, Davis doesn’t envision Tennessee abandoning its ground game.

“Any time you want to be an attacking, physical team and run the ball, you can’t just do that with one guy,” Davis said. “Even though they have one of the top, if not the best, running back in the league, you still have to have other guys that can get the job done. They have good running backs by committee and guys who can come in and get the job done.”

One of those replacements is Adrian Peterson, now in his 15th season at 36. Saints coach Sean Payton coached Peterson for four games with New Orleans in 2017, and he said the 2012 NFL MVP is the one player he has coached knowing Peterson had a different body clock than anyone else.

“He still has power,” Payton said. "You can see it. That surge on his touchdown run the other night was impressive, and he takes care of himself well. He’s one of those unique athletes. It doesn’t surprise you.”

The Saints, who gave up a touchdown last week after a sack-strip of Siemian was returned deep into New Orleans territory, are re-establishing a big emphasis on protecting the ball. It’s not just because of the bitter memories.

Tennessee has seven interceptions and four fumble recoveries in its past five games. Safety Kevin Byard has led the way, and he has six takeaways this season. He's also the only player in the league this season to score on a fumble recovery and a pick-6 — the first of his career.

“If you feel like you watch enough film and you got a good bead on what’s about to happen, go out there and make a play," Byard said.

The Saints rank next to last in the NFL in yards passing – a stark contrast from when Payton’s offenses led the NFL in passing six times with Drew Brees behind center.

Sometimes the Saints have kept the ball on the ground by design and leaned on their 10th-ranked running game averaging 123 yards per game. Last week, anemia in the passing game for most of the first three quarters caught up with them as they fell behind 24-6 to Atlanta.

The Titans come in tied for fifth in the NFL with 23 sacks, led by linebacker Harold Landry with nine. Defensive tackle Jeffery Simmons is coming off a career-best game with three sacks against the Rams and is a big reason they are second over the past five weeks with 96 quarterback pressures.