Stukes: rookie punt returner not to blame for big blunder 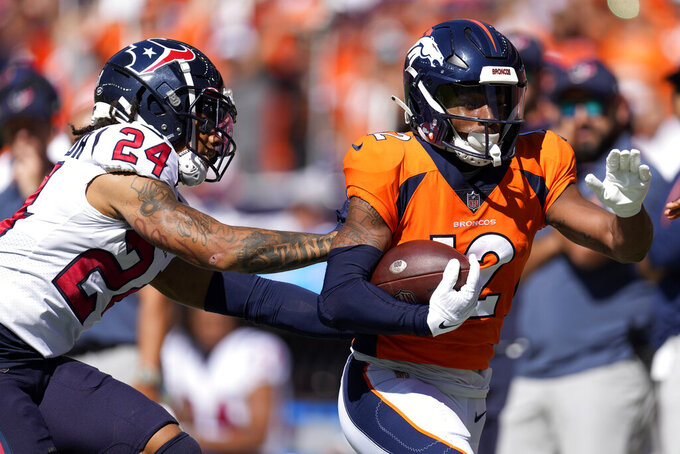 ENGLEWOOD, Colo. (AP) — The Denver Broncos have admittedly made plenty of rookie mistakes so far.

However they insist their young punt returner failing to take the field for a punt return Sunday wasn't one of them.

Special teams coordinator Dwayne Stukes said rookie Montrell Washington actually did the right thing by not bolting onto the field for a punt return early in the fourth quarter against Houston, forcing head coach Nathaniel Hackett to burn a timeout.

“I don't think you can blame Montrell for that, correct?" Stukes said Thursday in his first comments on the sequence that occurred with just under 10 minutes left in Denver's 16-9 victory.

Stukes said defenders celebrated a tad too long after defensive tackle Dre'Mont Jones sacked Davis Mills, pushing the Texans out of field-goal range with the Broncos ahead 13-9.

“There’s no disrespect by this statement to the defense, but we made a big play on defense —we got a sack,” Stukes said. “They celebrated a little longer than we anticipated. Houston got their punt team on the field with urgency and the clock was going tick, tick, tick.”

Stukes suggested Washington did the right thing by staying on the sideline because there were already 11 men on the field and if he ran out to field the punt, the Broncos would have been penalized. That would have moved the Texans back into field-goal range at the Denver 40-yard line for a 58-yard try by Ka'imi Fairbairn.

“Montrell is in tune to situational football because we always talk situational football,” Stukes said. "He was ready and prepared to go. We just can’t send him out there when we already have 12 (sic) guys out there. That would have been a bad look for me as the special teams coordinator.”

Jones' sack of Mills for a 7-yard loss pushed the Texans back to the Denver 45-yard line, which would have made for a 63-yard field-goal try, so Houston coach Lovie Smith sent his punt team out on fourth-and-14.

After the timeout at the 9:55 mark, Washington called for a fair catch at his 14 and the Broncos chewed up more than six minutes on a 12-play drive capped by Brandon McManus' 50-yard field goal.

Earlier in the week, Hackett accepted responsibility for the play-calling hiccups that have dogged quarterback Russell Wilson and the Broncos offense so far.

The Broncos have committed 25 penalties through two games, the most in a two-game stretch in their history. Among the 13 infractions Sunday were two delay-of-game penalties on field-goal attempts, something that's exceedingly rare in the NFL.

Stukes blamed himself for those.

“Just communication as far as what we were going to do," Stukes said. "We have to be more urgent when we get on the field to get in the huddle, break the huddle and get to the line of scrimmage. Regardless of the time on the clock, we just need to speed that operation up a little bit.

"That’s on me. I have to do a better job of coaching that as well as the players in the huddle and checking out the play clock.”