Subject of race a challenge for coach in isolated town 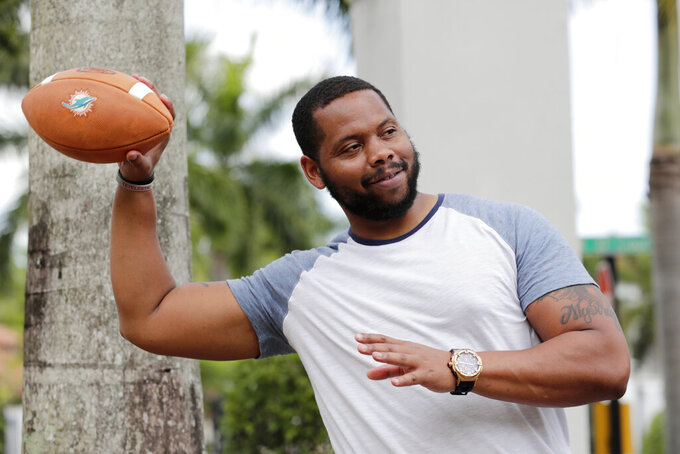 In this Tuesday, June 16, 2020 photo, D.J. Boldin throws a football outside of his home in Miramar, Fla. Boldin is the football coach at Pahokee High School, a predominantly black school located alongside Lake Okeechobee in Florida. Recent events have given Boldin an opportunity to use his position to prepare his players for the challenges they will face when they leave the bubble that is their small town. (AP Photo/Lynne Sladky)

PAHOKEE, Fla. (AP) — A wide spot in the road running alongside Lake Okeechobee, Pahokee is a low-income, predominantly black town with two traffic lights and no chain restaurants, 40 miles and a world away from President Trump's Mar-a-Lago estate.

“The only Hispanics on the team were kickers,” Boldin says. “Talk about setting a stereotype. I did not have a white player on my team.”

Therein lies Boldin’s challenge, or at least one of them, in this time of racial reckoning and awakening.

He’s a black Pahokee native who played receiver at Wake Forest, majored in sociology and landed a coaching internship with the San Francisco 49ers.

At 33 the coach is an eager mentor. Recent events have provided even more opportunity to address the challenges his players will face when they leave the bubble that is their town.

“When I was coming up I didn’t notice racism, because everybody looked like me,” Boldin says. “The first taste of racism I ever encountered was when I went to college. Our kids in Pahokee are pretty shielded.”

Not that life for them is easy. Pahokee, flanked by the lake and sugarcane fields, is a high-crime area with an average household income of $39,312 and a poverty rate of 38%.

Lake Okeechobee, that dot in the middle of Florida, is literally visible from outer space. Pahokee (population 6,300) tends to go unnoticed.

“You’ve got to find ways to survive,” says Geoffrey McKelton, who will be a senior defensive back for Boldin this fall. “There are not a lot of opportunities.”

It has been that way for a long time.

“Lord, I tried everything within my power, but I can’t make but just a dollar an hour,” goes the song “Mr. Dropout” by country music star Mel Tillis, Pahokee High School Class of 1951.

The Class of 2020 is preparing to leave the difficult but insulated environment to enter a world roiled by a pandemic, the death of George Floyd and the protests that have followed.

Most of Boldin's players are using football as a way out. At the end of last fall's 6-6 season he had 12 seniors, and 10 plan to play in college, all with scholarship aid, including five in Division I.

Like much of Florida, Pahokee has long been a hotbed for the sport. And the town takes it seriously.

“When the football team is doing well, the crime rate goes down, the economy goes up and the whole city is more jolly,” says Demetres Hampton, a Pahokee native and longtime assistant coach at the high school.

City Manager Chandler Williamson says Pahokee has struggled economically for decades, but benefits from the support of the Boldins and other former football stars.

“D.J. has set the bar high and has that NFL pedigree,” Williamson says. “Anquan is an active supporter in the community, and others have bought property and reinvested in Pahokee. Football has kept this community moving forward.”

The Blue Devils are six-time state champions and play in Anquan Boldin Stadium, the name a reminder football can lead to fame and fortune. More than a dozen alumni have played in the NFL, including Pro Football Hall of Famer Rickey Jackson.

But are coach Boldin’s players ready for what they’ll encounter when they put the town's towering royal palms in the rear view mirror to chase their dreams?

“Something like that is not talked about -- the people you are going to see outside of Pahokee,” Boldin admits. “You don’t even think about it. Now, with racial identity in the forefront of the world, you can have that conversation and it doesn’t seem far out.”

Add the topic to a long list the coach covers with his players beyond blocking and tackling. He requires them to attend weekly mentoring sessions hosted by Hikeem Banks, a Pahokee native and Pentecostal youth minister.

“Coach Boldin cares about the person as a whole, not just the athlete,” Banks says. “In Pahokee, you can roll out of bed and play football. It’s a question of what you’re going to do when football is done. That’s what coach Boldin has done — build the whole man.”

Guest speakers at the mentoring sessions have included a lawyer, doctor, financial expert, realtor and sheriff’s deputy. And on the subject of relations between blacks and police, Boldin can speak painfully from experience: His cousin was shot to death in 2015 by a plainclothes police officer who was convicted of manslaughter and attempted murder.

Boldin, the father of two young children, has thought a lot about what he next wants to say to his players about the police. He plans a seminar on what they should do if pulled over while driving.

“You need to talk about the possibility of how your interaction with police could go,” Boldin says. "But you can also talk about what's the right thing to do, and the good officers, and the positive impact they can have on kids’ lives.”

Such is the national conversation following Floyd’s death. The country has become a different place in the past few weeks, and much of the United States has long been very different from Pahokee.

“I’ve been around white people, but I haven’t experienced racism at all,” says McKelton, who just turned 17. “But I know how to handle it: ignore people if they say stuff, keep my head high, don’t lose focus.”

McKelton is considering scholarship offers to play at the University of South Florida or Indiana University beginning in 2021. That gives Boldin a little more time to help prepare the young man for what life may have in store.