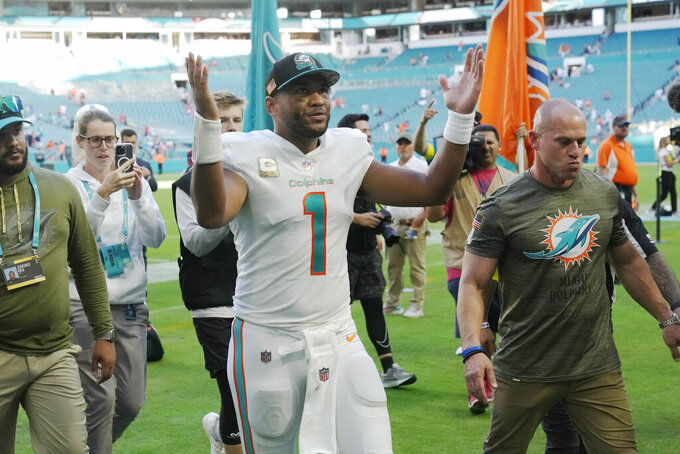 Miami Dolphins quarterback Tua Tagovailoa (1) looks up to fans as he exits the field during at the end of an NFL football game, Sunday, Nov. 13, 2022, in Miami Gardens, Fla. The Dolphins defeated the Browns 39-17. (AP Photo/Wilfredo Lee)

MIAMI GARDENS, Fla. (AP) — The heavy support Miami Dolphins quarterback Tua Tagovailoa has received from his organization and teammates has been coupled with strong backing from NFL fans.

“That’s awesome,” Tagovailoa said. “That’d mean that world, to be recognized for something like that in a league that’s really tough, and the competition is really tough and guys are really good. Coming into my third year and experiencing a lot of the things I’ve had to experience and go through, that’d be awesome.”

In a career season, Tagovailoa leads the NFL in passer rating (122) with 2,859 yards passing, 21 TDs and five interceptions.

With five games left, Tagovailoa has already thrown for more yards and touchdowns than in his previous two NFL seasons and guided Miami to an 8-4 record — one game behind the AFC East-leading Buffalo Bills.

Fan voting counts one-third, along with player and coach votes, toward determining Pro Bowl selections. NFL players and coaches will vote on Dec. 16.

A Pro Bowl selection would be the first in Tagovailoa’s career.