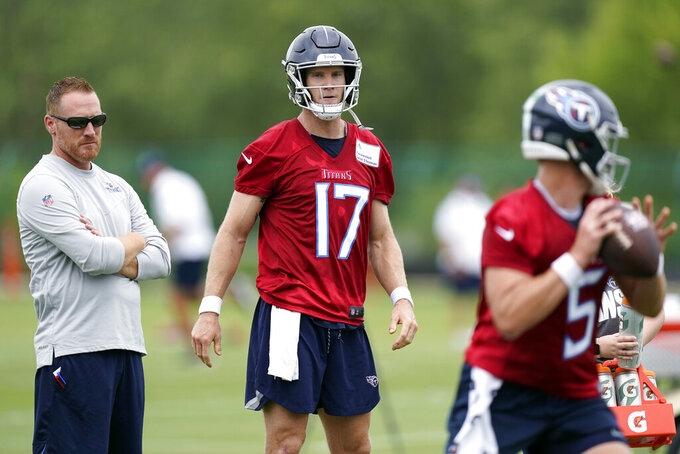 Tennessee Titans quarterback Ryan Tannehill (17) watches as quarterback Logan Woodside (5) throws during training camp at the NFL football team's practice facility Thursday, July 28, 2022, in Nashville, Tenn. After going into the playoffs with the Titans as the AFC's No. 1 seed and losing 19-16 to Cincinnati, Tannehill goes into his fourth season needing to prove 2021 was simply an off year and that he can win when it matters most in the postseason. (AP Photo/Mark Humphrey) 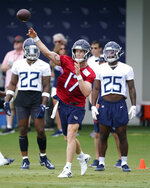 NASHVILLE, Tenn. (AP) — No quarterback has won more games over his first three seasons with the Tennessee franchise than Ryan Tannehill, who has posted a 30-13 record for the Titans.

The problem? He is 2-3 in the postseason.

Worse is Tannehill and the Titans losing three straight playoff games, with the past two on their home field. The most painful came in January, when Tennessee was the AFC's No. 1 seed and Tannehill was intercepted three times — the last with 20 seconds left in a 19-16 loss to Cincinnati.

Tannehill goes into his fourth season needing to prove 2021 was simply an off year and that he can win when it matters the most.

“It's just fuel,” Tannehill said. "You look at things in your past and experiences that you’ve been through and you can learn from them and you can use them as fuel as you move forward. So that’s the thought here in moving forward is attacking this year, each and every day and try to get the most out of it.”

Tannehill became the first quarterback since Warren Moon between 1987 and 1993 to lead the franchise to three straight playoff berths. Even as the Titans went 12-5, Tannehill had his worst statistical season since replacing Marcus Mariota as the starting quarterback in mid-October 2019.

He threw his fewest touchdowns (21), and his 14 interceptions were one more than he had in his first two seasons in Tennessee combined. It didn't help that Tannehill was one of only six Titans to start every game in 2021, when Tennessee used an NFL-record 91 players — the most for a non-strike season.

Then came the playoff loss.

Tannehill talked in May about how much he struggled to deal with that loss, even using therapy to help with the sleepless nights.

General manager Jon Robinson also took that loss tough and said he talked with Tannehill. For the GM, the key is moving on and not letting one loss fester. Robinson thinks Tannehill has turned the page based on what he's seen out of the quarterback entering his 11th NFL season.

“Juice. Energy. Leadership. Fired up to be out here,” Robinson said. “Working with the new players that are on the team about, ‘Hey, when you run this route this way, look for the ball, because this is what I’m looking for out of you on this certain route.’ He’s into it. Ready to roll.”

Tannehill said he doesn't feel as if he's speaking up more.

“I feel like I just am leading the way, you know, that I believe is effective and the way that works for me,” Tannehill said. "So I’m going to continue doing that, continue pushing the envelope, trying to bring this team, this offense along as fast as we can.”

The Titans tried to give Tannehill more help by acquiring wide receiver Robert Woods from the Rams in March. Tannehill's favorite receiver the past three seasons is gone, with A.J. Brown traded to Philadelphia, and the quarterback now working with what the Titans hope will be Brown's replacement in rookie Treylon Burks.

They also signed tight end Austin Hooper and drafted the fastest tight end at the NFL combine, Chig Okonkwo. And Derrick Henry, the NFL's rushing leader in 2019 and 2020, is back after missing nine games last season with a broken right foot.

Tannehill is under contract through 2023, but his contract counts $38.6 million against the salary cap this season. The Titans drafted Malik Willis out of Liberty in the third round, the earliest they've selected a quarterback since taking Mariota at No. 2 overall in 2015. Tannehill, who turned 34 on Wednesday, isn't looking ahead at this point of his career.

“I take it one year at a time," Tannehill said. "So right now I love the game, I love competing, I love where I’m at physically, you know, I still feel really good. So one year at a time and excited for for what’s ahead.”

NOTES: Wrestler Ric Flair spoke to the Titans at the end of practice Thursday at the invitation of coach Mike Vrabel. The 73-year-old Flair is wrestling for the final time on Sunday in Nashville. Flair said he's been a fan of Vrabel since he played for the Patriots, and Vrabel grew up watching wrestling with his father and became a Flair fan himself. “I thought he would love to to talk to the players, which he was, he was excited to come over here," Vrabel said. "He brings an energy and excitement and passion. And I know that they appreciated it.” ... The Titans swapped receivers before practice, waiving Juwan Green and adding Terry Godwin, who was a seventh-round pick by Carolina out of Georgia in 2019. He spent 2019 on Jacksonville's practice squad and played three games for the Jaguars in 2020. He spent 2021 on injured reserve.