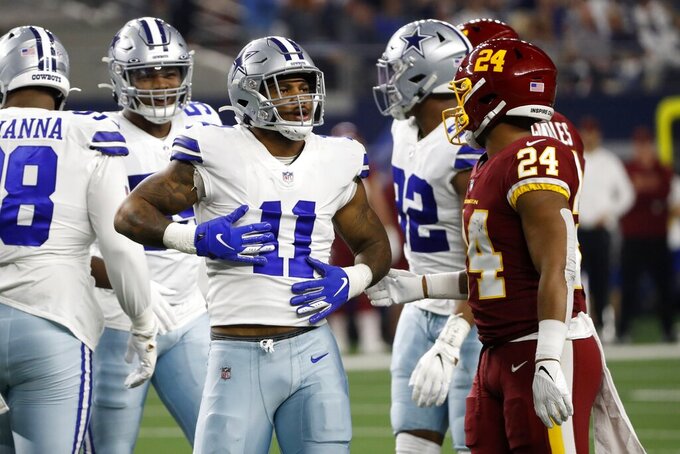 DENVER (AP) — After a recent road win by the Dallas Cowboys, receiver Simi Fehoko tweeted, “Just trying to find my seat on the plane and was sacked by Micah. ... Nobody is safe.”

Everybody seems to have their head on a swivel for rookie linebacker Micah Parsons.

The do-it-all defender combines a rare versatility — he lines up at linebacker, defensive end and even over center — with a dogged determination as he chases down quarterbacks, ball carriers, rookie records, the playoffs, NFL honors and even history.

Parsons' 13 sacks are 1½ shy of the rookie record set by Jevon Kearse of the Tennessee Titans in 1999. Parsons is already the first rookie in 15 years to get a dozen sacks and three forced fumbles. And with 79 tackles so far, he has an outside chance of getting triple-digit tackles to go with his double-digit sacks.

Better are the odds that he'll become the first player in 40 years to sweep the league's two biggest defensive awards, player and rookie of the year. The previous to do that was Pro Football Hall of Famer Lawrence Taylor in 1981.

“I will say it’s hard to have expected what No. 11 is doing in terms of doing all the things that he’s asked to do, whether it’s make great plays in coverage, whether it’s make plays on the quarterback from the blitzing spot, whether it’s a natural pass rusher, whether it’s just running plays down sideline to sideline,” Cowboys executive vice president of personnel Stephen Jones said on his radio show. “Who could have ever thought that he could digest all of that and be able to line up at all those different positions and get it done?”

Early glimpses of his ambition came through during HBO’s “Hard Knocks” series from training camp. Parsons begged to get back into preseason games, and wasn’t happy when he didn’t. He told an assistant coach, “The lion is always hungry,” and has since trademarked that unexpected catchphrase.

After allowing a franchise-high 29.5 points a game last year, the Cowboys are allowing just 19.5 points per game, and Parsons is the biggest reason for that dramatic drop.

Parsons skipped college football’s truncated COVID-19 year in 2020 before getting drafted 12th overall by the Cowboys last April. Dallas moved down two spots in the draft after two cornerbacks the club was targeting at No. 10 were taken. South Carolina’s Jaycee Horn went to Carolina at No. 8, and Patrick Surtain II of Alabama was taken ninth by Denver.

Now, Parsons leads a group of rookies who have helped put their teams in the heat of the playoff race. They include New England quarterback Mac Jones, Cincinnati receiver Ja'Marr Chase and San Francisco running back Elijah Mitchell, who hopes to return from a knee injury this week.

Other teams feature rookie duos setting them up for bright futures and perhaps the possibility of sneaking into this year’s postseason.

In Denver, it’s Surtain and tackle-breaking, bulldozing running back Javonte Williams, although the Broncos' playoff chances are almost nil after their 17-13 stumble at Las Vegas last weekend left them at 7-8 and facing long odds.

In Miami, it's Jaylen Waddle and Jaelen Phillips, whose Dolphins are in the AFC postseason mix after their 20-3 win over New Orleans that made them the first team in NFL history to win seven consecutive games in the same season that they endured a seven-game losing streak.

Surtain has been everything the Broncos' front office and coaching staff envisioned. He’s broken up or intercepted a dozen passes, including a pair of fourth-quarter picks of Justin Herbert in Denver's 28-13 win over the Chargers last month.

He picked off Herbert in the end zone early in the fourth quarter and sealed the win by returning his second interception 70 yards for a touchdown.

Surtain reached a top speed of 22.07 mph on his pick-6, according to Next Gen Stats, the fastest by a defensive back with the ball in his hands in the past five years.

That made him the first rookie since Marcus Peters in 2015 for Kansas City to have multiple interceptions, including a pick-6, in the same game.

Broncos coach Vic Fangio suggests Surtain, with his ever-so-rare combination of speed, size and length for a cornerback, ought to win Defensive Rookie of the Year honors for excelling so quickly at what's notoriously a difficult transition from college.

“I do. He’s playing a very hard position, and one where it’s hard to find quality players,” Fangio said. "He’s done a great job. He’s definitely very deserving of Rookie of the Year, or any honor that could come his way.”

In any other year, Surtain might be a lock. But Parsons is having an even better rookie season and while the Broncos are teetering on another losing campaign, the Cowboys have gone from 6-10 last year to 11-4 this season.

The Bengals have turned around from 4-11-1 to 9-6 and sit atop the AFC North after overtaking the sinking Baltimore Ravens last weekend. A key part of Cincinnati's resurgence is the combination of former LSU stars Chase and Joe Burrow, the top pick in 2020 whose rookie season was cut short by a knee injury, leaving the Bengals with a top-5 pick again this year.

Jones hasn't quite made Patriots fans quit longing for Tom Brady, but he's helped turn New England's rebuild into a one-year affair instead of the six-year quagmire the Broncos have endured post-Peyton Manning as they've churned through 10 starting QBs, including five different ones to start each of the past five seasons.