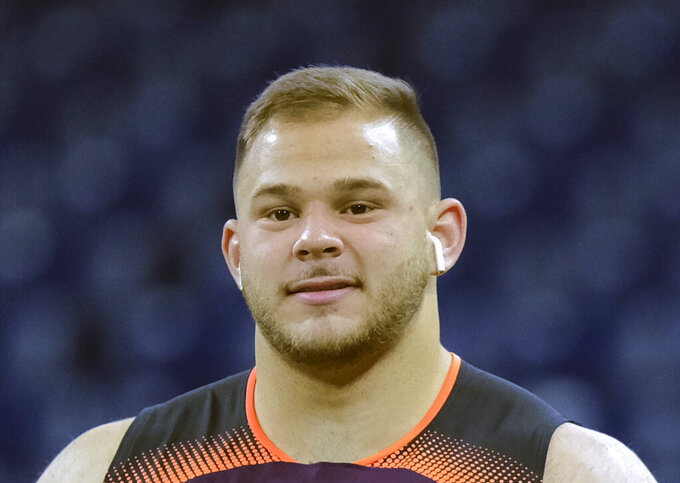 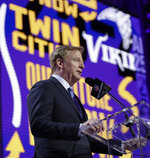 EAGAN, Minn. (AP) — After starting his career at North Carolina State as a tight end, Garrett Bradbury soon favored a move inside to the offensive line so he could be on the field as much as possible.

He started every game over his last three years for the Wolfpack, one of many factors in his selection by the Minnesota Vikings with the 18th overall pick in the NFL draft on Thursday night.

"That's something we pride ourselves in. Every offensive lineman, I think that's the best trait you can have, durability," Bradbury said.

The Vikings used their first-rounder on an offensive lineman for the first time in seven years. With the front five again their position of greatest need , the Vikings could hardly have had the board fall to them any better. Alabama tackle Jonah Williams, who could wind up as a guard in the NFL, was the first blocker off the board at No. 11 to Cincinnati. Boston College guard Chris Lindstrom went to Atlanta at No. 14.

Then the Vikings had their pick of the rest. With the 6-foot-3, 306-pound Bradbury , the Vikings got a natural fit with the inside zone-blocking scheme they'll be using to try to generate more of a running game and keep the pressure off quarterback Kirk Cousins.

Bradbury ran the 40-yard dash in 4.92 seconds at the scouting combine, the third-fastest time among all offensive linemen. He finished the three-cone drill in 7.41 seconds, the fastest of his position group. The endorsement of new offensive adviser Gary Kubiak carried plenty of weight in the room. So did the impression of defensive line coach Andre Patterson from his evaluation of prospects on the other side, when he walked in coach Mike Zimmer's office one day.

"He said, 'Who's this center from NC State? This guy is a really good football player,'" Zimmer said. "And so that even intrigued me more."

Pat Elflein, who has been the starting center since being Minnesota's third-round draft pick in 2017, becomes a strong candidate to move to guard, his primary college position. Both general manager Rick Spielman and coach Mike Zimmer stopped short of assigning a position to Bradbury, who was the starting left guard for the Wolfpack as a sophomore before moving to the middle.

"We're just trying to get the best football players in here," Spielman said.

The Vikings did not go with another cornerback. Spielman even joked this week at his pre-draft news conference that his wife told him not to come home if the Vikings were to use that precious first-rounder on another player at the head coach's favorite position, where Zimmer has helped develop several draft picks into standouts over the last five seasons. This preference became a punch line for fans last year, as the Vikings frequently struggled up front.

Now they have an Associated Press All-American and the winner of the Rimington Trophy, awarded to the nation's best center.

"The one thing I know is that he doesn't play corner, so I can go home tonight," Spielman said.

Quipped Zimmer, smiling: "I was trying to get one."

Last year, the Vikings passed on a deep class of interior offensive linemen to take cornerback Mike Hughes out of Central Florida with the 30th overall pick. Hughes showed plenty of promise , returning an interception for a touchdown in his NFL debut, but he tore the ACL in his left knee six games into his rookie season.

With Hughes coming off his injury, Holton Hill suspended for the first four games this year and Trae Waynes entering the final season of his contract, cornerback wouldn't have been an indulgent selection. But the need up front, after a so-so first season under Cousins, was too glaring to ignore.

The only other time in the 13 drafts the Vikings have had with Spielman that they made an offensive lineman their first pick was 2012, when tackle Matt Kalil went to them at No. 4 overall. He made the Pro Bowl as a rookie, but his five-year tenure with the team was mixed at best. That was the first draft with Spielman as the final decision-maker. When he was vice president of player personnel before his promotion, Spielman shared authority with the head coach.

The Vikings have only used a first-round selection on an offensive lineman three times in the past 30 years: Kalil, Bryant McKinnie (2002) and Todd Steussie (1994). They were each picked for at least one Pro Bowl. Two of the three others taken in the first round in Vikings history, Randall McDaniel (1988) and Ron Yary (1968), are Pro Football Hall of Fame members.

With 50th overall pick in the second round on Friday night, the Vikings could get another starting-caliber offensive lineman. Florida tackle Jawaan Taylor and Oklahoma tackle Cody Ford, both widely expected to be first-rounders, remained available. So did Kansas State tackle Dalton Risner, who could wind up as a guard.