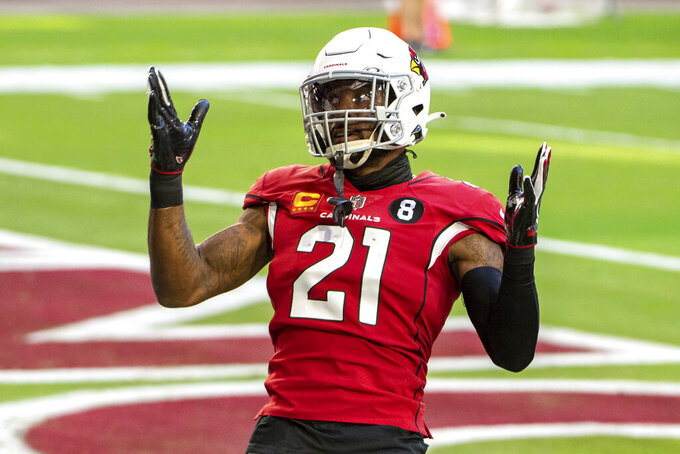 MINNEAPOLIS (AP) — Minnesota general manager Rick Spielman was sitting in a lounge last week at the Atlanta airport, having finished scouting at Georgia's pro day, when his phone buzzed.

Patrick Peterson's agent, Joel Segal, was on the line wondering about the Vikings' interest in the eight-time Pro Bowl cornerback.

There was no hesitation on Spielman's part, only uncertainty about whether they could come to a contract agreement that would satisfy the 10-year veteran and comply with the team's tight salary cap situation.

“We have talked about him during our free agency meetings but didn't think we would have a legitimate shot,” Spielman said.

After leaning hard yet again on executive Rob Brzezinski, the club's renowned cap manager, to find a solution, Spielman sent Peterson the recruiting video standing in for the pre-pandemic in-person visits. Coach Mike Zimmer checked in for a chat.

Two hours later, a deal was done with the former Arizona Cardinals stalwart who will begin his 11th season in the NFL on a one-year contract for at least $8 million.

“I know how excited Coach Zim is, and our defensive staff is, to start working with him and the experience he’s going to bring to our young group on the back end,” said Spielman, who introduced Peterson at a virtual news conference on Monday with Minnesota reporters but did not take questions. “I also know that he has a lot of football left, and usually when you bet on guys that have the pedigree that he has, you’re going to get some outstanding football going forward. I know that he has a lot to prove to a lot of people. He didn’t have anything to prove to us, because we already know what type of football player he is.”

The 30-year-old Peterson, for the record, predictably does not believe he's past his prime.

“My dreams and aspirations were to play 16 years. I feel I’m fairly healthy. I haven’t had any major injuries throughout my career, so I feel unbelievable,” Peterson said.

The Vikings sure could have used his savvy and wisdom last season.

Mike Hughes and Holton Hill started as the primary cornerbacks, both of them 23 years old with fewer than 25 games of professional experience entering 2020. Kris Boyd was in his second season. Jeff Gladney, Cameron Dantzler and Harrison Hand were rookies.

If the growing pains weren't hitting the group hard enough, injuries set them back further. Gladney and Dantzler, the potential cornerstones at the position for the coming years, gained significant experience, but there was little else to salvage from the season. Hill was let go. Hughes has a tenuous spot on the roster after a third straight injury-affected year following his selection in the first round of the 2018 draft.

Peterson, then, will have his hands full of responsibility. He didn't come to play safety, either, like some cornerbacks do in the twilight of their careers.

“I’ve been through some good times. I’ve been through the bad times. Just as long as I find a way to stick to the script and fall back on my fundamentals, I know I’ll be OK,” said Peterson, who has never missed a game to injury. "So now having a fresh start, new scenery, fresh air, I think it’s going to be great for me.”