Vikings hang on for 28-25 win over Saints in London 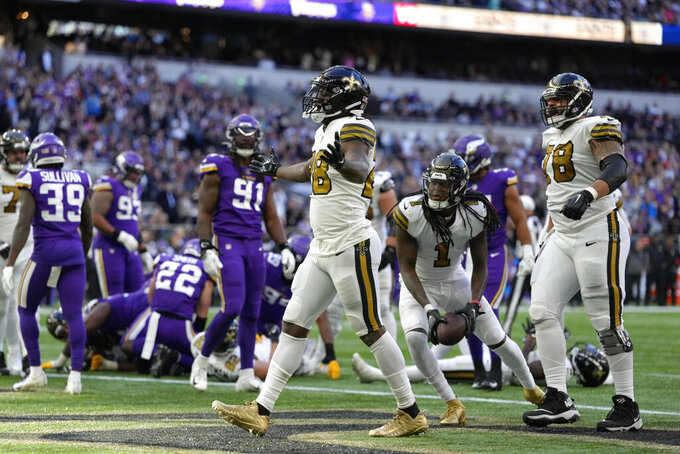 New Orleans Saints running back Latavius Murray (28) celebrates after scoring a touchdown during the third quarter of an NFL match between Minnesota Vikings and New Orleans Saints at the Tottenham Hotspur stadium in London, Sunday, Oct. 2, 2022. (AP Photo/Kirsty Wigglesworth)

LONDON (AP) — Justin Jefferson bounced back from two quiet games and Greg Joseph made amends for a missed extra point.

The Vikings star receiver scored a touchdown and beat Marshon Lattimore on a 39-yard reception to set up Joseph’s 47-yard field goal with 24 seconds left and Minnesota hung on for a 28-25 win over New Orleans on Sunday at Tottenham Hotspur Stadium.

Many of the Vikings (3-1), though, thought they were headed to overtime when Saints kicker Wil Lutz lined up for his 61-yard tying attempt. And why not? Lutz had hit a 60-yarder on their previous possession.

This one had the distance but hit the left upright and then the crossbar before bouncing out as time expired.

“When it left his foot I thought it was going in,” Vikings coach Kevin O'Connell said. “It felt like that thing had a real good chance to go through and obviously a couple of bounces later we're able to walk off as the winning team.”

Joseph's go-ahead kick came after he had missed an extra point earlier in the quarter after Jefferson ran it in from 3 yards with 4:15 left in the fourth quarter.

The missed kick left the Vikings with a 25-22 lead.

The Saints then had an eight-play drive and Lutz made a 60-yard field goal with 1:51 left to tie the game for the Saints (1-3), who have lost three straight games.

“I thought they were both in,” Lutz said. “I hit them both on the screws. The second one just moved a little more left. So kind of shocked it didn’t bounce in.”

Jefferson had 10 receptions for 147 yards after being limited to a total of nine receptions and 62 yards in the past two games, He was pleased to finally see some single coverage.

“Lattimore pretty much followed me the whole game, pretty much was a one-on-one battle the majority of the game,” Jefferson said. “I was telling (O'Connell) the whole game we should throw it up, give me a chance to go up and make a big play."

Joseph was 5 for 5 on field goals as the Vikings squandered multiple scoring chances, but still held off a New Orleans team that played without key starters including quarterback Jameis Winston and running back Alvin Kamara.

Kirk Cousins completed 25 of 38 passes for 273 yards with a touchdown and an interception. The Vikings under O'Connell are off to their best start since going 4-0 in 2016.

The Saints arrived early in the week to acclimate to the time difference but their losing streak is now at three games under coach Dennis Allen.

“We still have to find a way to not hurt ourselves with penalties and the turnovers, and that’s got to change,” Allen said.

Down 16-7, Saints backup quarterback Andy Dalton led two scoring drives to help New Orleans take 22-19 lead. Saints tight end/quarterback Taysom Hill took a direct snap and ran it in from 2 yards for the go-ahead score in the fourth quarter and Dalton found a wide-open Jarvis Landry for the 2-point conversion.

After the Saints cut Minnesota's lead to 16-14 on Latavius Murray's 1-yard run late in the third quarter, the Vikings drove again and Joseph made it 19-14 with a 46-yard field goal early in the fourth quarter.

The Vikings led 13-7 and had first-and-goal on the 3 after Jefferson's 41-yard reception in the third quarter, but were pushed back by a delay of game penalty. Cousins then threw short to Adam Thielen instead of going to a wide-open Jefferson in the back of the end zone.

One play earlier, Cousins threw behind Jefferson in the end zone and the receiver couldn't hold on.

The Saints began slowly again despite emphasizing a quick start all week. Alexander Mattison weaved through traffic for a 15-yard touchdown reception on Minnesota's opening drive.

The Saints had no first downs in the first quarter, but safety Tyrann Mathieu intercepted a pass and Dalton then drove the Saints 60 yards and found Chris Olave for a 4-yard touchdown pass — the rookie's first NFL touchdown — to make it 7-7 early in the second quarter.

The Vikings squandered two good opportunities deep in Saints territory late in the second quarter. Tight end Johnny Mundt dropped a short pass on a third-and-1 from the 10 and Minnesota opted for a field goal.

On the next possession, Dalton fumbled on a strip-sack by Za'Darius Smith and Dalvin Tomlinson to give the Vikings the ball on the 20. They again settled for 3 points after an incompletion and a false start penalty. Joseph's 36-yard field goal gave the Vikings a 13-7 lead going into halftime.

The Vikings improved to 3-0 in London games — with wins in three different stadiums. The Vikings beat the Pittsburgh Steelers 34-27 in 2013 at Wembley Stadium and topped the Cleveland Browns 33-16 four years later at Twickenham Stadium. This was the fifth NFL game at Tottenham, the Premier League club's stadium that cost more than $1 billion to build and opened in 2019.

Vikings rookie Lewis Cine was carted off the field with a leg injury late in the first quarter. He was blocking on a punt return when he sustained the injury. O'Connell said Cine has a “lower-leg fracture” and will remain in London to have surgery. ... DL Carl Granderson was ruled out at halftime. Saints wide receiver Michael Thomas had been ruled out before the game and Kamara (rib) was inactive.

Vikings: Host NFC North-rival Chicago Bears next Sunday; their bye is in Week 7.

Saints: Host the Seattle Seahawks in the first of back-to-back games at the Superdome.