Wagner educates himself to get new deal done with Seahawks 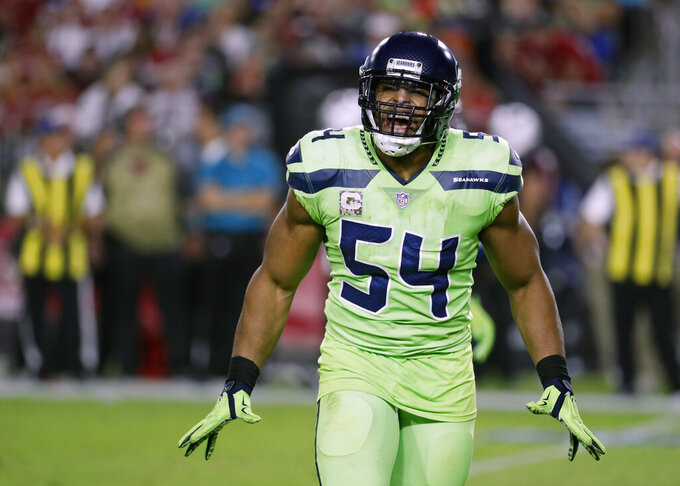 FILE - In this Thursday, Nov. 9, 2017 file photo, Seattle Seahawks middle linebacker Bobby Wagner (54) reacts during an NFL football game against the Arizona Cardinals in Glendale, Ariz. The Seattle Seahawks have agreed to a three-year contract extension with All-Pro middle linebacker Bobby Wagner, locking up the anchor of their defense for the foreseeable future. Wagner and the Seahawks completed the lengthy contract negotiation, Friday, July 26, 2019 on the second day of training camp and will keep the All-Pro in the only uniform he has played in as a professional. (AP Photo/Rick Scuteri, File)

RENTON, Wash. (AP) — Rather than hearing it through an intermediary, Bobby Wagner wanted to be told directly where he was viewed to have shortcomings.

Why his employer valued him at only a certain number. What restrictions the Seattle Seahawks faced in fitting him into their long-term plans.

None of that is easy to hear at times. But when the All-Pro middle linebacker of the Seahawks decided to handle his own contract negotiations, he knew sitting and listening — without getting emotional and upset — was going to be part of the job.

"My goal was to challenge myself and if anything I want players to leave wanting to educate themselves. Whether they want to do it themselves or have an agent, no matter what the situation is, you got to know the business and you got to educate yourself to what's in your contract, how they got there, how they got to those numbers," Wagner said on Sunday.

"I feel like there's two negotiations: there's one between the GM and the agent and there's the agent and the player, because you're not in that room. You might miss some things that's not being talked about. My thing is, how I looked at it, I didn't want them to say all the bad stuff to the agent, I wanted them to say it to my face. I could take it."

Wagner was back fully practicing with the Seahawks on Sunday, two days after finishing up his $54 million, three-year extension with the Seahawks that on a yearly average basis makes him the highest-paid middle linebacker in the NFL.

The $85 million, five-year deal C.J. Mosley signed with the New York Jets in the offseason reset the entire market and challenged the Seahawks to create a compensation package that rewarded one of the top players in the game at his positon.

The sides finally hammered out the final details on Friday, ending a long and eye-opening education for Wagner in the process of how a deal gets done.

"Being the highest-paid was dope," Wagner said drawing laughter. "It was dope but my thing was to just make sure we got a deal done and that's kind of what I was really focused on was getting a deal done and just trying to do better than the last one. In everything in life you want to be better, so I wanted to do better than my last deal and I feel like I accomplished that."

Wagner said his decision to represent himself wasn't meant to be a slight on agents and their role in contract negotiations. But entering his third deal with Seattle, Wagner sought the challenge of learning how the system works and figuring out for himself what he wanted and how to get it done. The personal education was more important than any statement he may have been making.

"This was me trying to educate myself before I get out there in the real world and actually have some real world experience," Wagner said.

One person thrilled with Wagner's contract situation being settled was coach Pete Carroll. The first two days of training camp seemed awkward with Wagner a spectator, especially the first day when he came to the practice field without his jersey. Carroll noted the distraction of the contract hanging over Wagner and said he would be eased into the start of camp.

"If a guy is going to get paid you want it to be a guy like this. He just stands for so much positive, so much good," Carroll said.

NOTES: Seattle brought back former defensive back DeShawn Shead on a one-year deal. Shead played last year with Detroit after spending his first six seasons in the league with Seattle. Shead felt he was still recovering last year from a major knee injury suffered in the 2016 playoffs with Seattle. No longer in rehab mode and with the chance to get into football shape, Shead said he feels as if he's back to his pre-injury status. "I was telling everybody this, 'I'm back home,'" Shead said. Carroll said Shead will initially work at safety, but could be used at cornerback as well.