Wagner returns to practice for Seahawks after brief absence 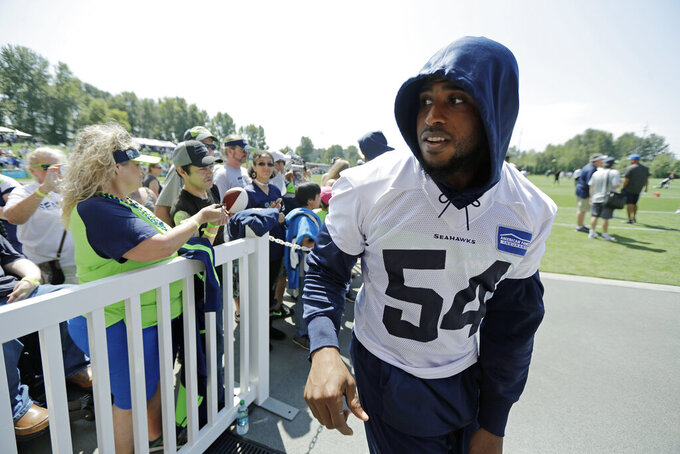 RENTON, Wash. (AP) — Bobby Wagner was back in pads and on the practice field for the Seattle Seahawks on Friday although it remains unclear when, or if, the All-Pro linebacker will see any action during the preseason.

Wagner missed most of the past two weeks following a minor procedure on his knee. He took part in Seattle's mock game on Aug. 3 then became a spectator.

The question now is whether Wagner will see the field in one of Seattle's final three preseason games. It's unlikely he will play Sunday night when the Seahawks face the Vikings in Minnesota, but there's a chance he could play in the third game against the Los Angeles Chargers. Seattle has traditionally not played many — if any — starters in the final preseason game.

"I'm ready. I'm good," Wagner said. "I definitely want to get out there because we don't get a chance to tackle at practice. I've been trying to get as many mental reps as I can but it would be good to hit somebody."

Wagner said he decided to have the procedure early in the camp so it wouldn't push up against the start of the regular season.

Coach Pete Carroll agreed he would like to get Wagner some game action before Week 1 against Cincinnati. Wagner has been an All-Pro selection for three straight seasons and last year had 138 tackles.

"It would be good for Bobby to get on the field. We'll see if we can get that done," Carroll said. "It kind of depends on how the practice goes and how his work goes. He would be better off if he could play some, just to get going, just to get a feel but other than that he's a master at what we're doing. He'll play well."

Backup quarterback Geno Smith also returned to practice in a limited fashion Friday after undergoing surgery to have a cyst removed from his knee late last week. It appears unlikely Smith will play against the Vikings.

Carroll said defensive end Ezekiel Ansah suffered a minor groin injury in his rehab work as he continues to get into shape following offseason shoulder surgery. Carroll didn't believe it would affect Ansah's availability for the start of the season.