Wilkerson, Stevenson give Pats needed boost in win over Jags 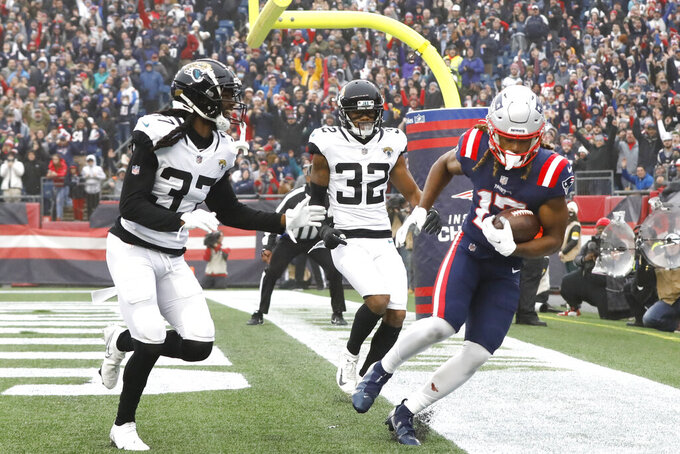 Big contributions by two unlikely sources in their win over Jacksonville arrived at the perfect time as the Patriots prepare to return to the playoffs following a one-year hiatus.

Second-year receiver Kristian Wilkerson had the first two touchdown catches of his career after being promoted from the practice squad for the second consecutive week, and rookie running back Rhamondre Stevenson rushed for a pair of scores to help New England rout the Jaguars 50-10.

It was the third appearance of the season for Wilkerson, who has spent most of the year on the practice squad, logging only seven offensive snaps prior to Sunday.

“I was just ready to go,” he said. “Just prepared all year for this, so it finally came and hopefully I did what I did, but we got the win, so that’s the best thing.”

Stevenson was back on the field after spending last week on the reserve/COVID-19 list. He responded with a career-high 107 rushing yards on 19 carries. He carried the load for the rushing attack after Damien Harris was sidelined in the second half with a hamstring injury.

It was the latest example of Stevenson overcoming adversity in his first season; he lost a fumble on his first career carry of the season opener, a game New England dropped to Miami.

Wilkerson was elevated to the active roster on Saturday and got the reps that have been going to 2019 first-round draft pick N’Keal Harry. But Harry has continued to underwhelm in his third year with only 12 catches for 184 yards and no touchdowns in 11 appearances. He was a healthy scratch Sunday.

Armed with the biggest opportunity of his career to date, Wilkerson responded by catching his first three targets of the day. The third was a 6-yard TD to put the Patriots up 21-3 in the second quarter. His second score came on a 20-yard pass on their opening possession of the second half that stretched the lead to 34-3.

“It was nice to see him get the opportunity today and take advantage of it, cash in and play well,” coach Bill Belichick said.

Wilkerson’s primary duties this season have been playing the role of opponents’ top receiver on the scout team. But quarterback Mac Jones said when Wilkerson’s gotten an occasional play with the first-team offense, he’s maximized it. It’s helped them maintain a level of chemistry.

“We get the game plan and those guys will come over and run extra routes and all that while someone else is doing special teams or whatever it may be,” Jones said. “We’re trying to get the extra work, get the timing, and all those guys did a great job today, and we’ll just try and continue to build off that.”

Like Wilkerson, receiver Jakobi Meyers entered the league as an undrafted free agent and knows what it takes to earn playing time. He called Wilkerson’s evolution from last season to turning in the performance he did Sunday “amazing.”

“Just understanding where he came from, undrafted, guys probably doubting you, you’re just waiting on your moment, working hard every day,” Meyers said. “He’s in here at 6 every morning. Seeing him go out there and make plays that we all knew he could make – now everybody gets to see it. I’m real happy for him.”

Wilkerson said that work ethic is the blueprint that’s been ingrained in him since he arrived in New England.

“Working hard is the standard here pretty much if you want to make it or play,” he said.