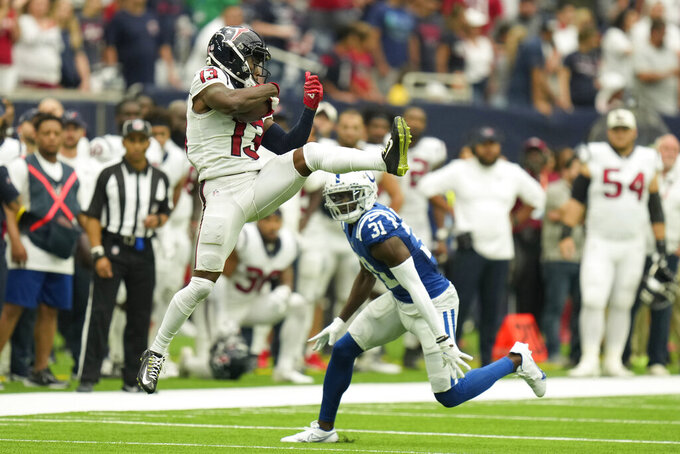 OPENING LINE: Broncos by 9 1/2, according to FanDuel SportsBook.

TURNOVER DIFFERENTIAL: Texans plus-1, Broncos minus-1.

TEXANS PLAYER TO WATCH: TE O.J. Howard made an immediate impact in the opener after signing with the Texans Sept. 2 following his release by the Bills at the end of camp. Howard, who spent the past five seasons with Tampa Bay after being drafted in the first round in 2017, had two catches, which were both for touchdowns, becoming the third tight end in NFL history to have two or more TD receptions in his first game with a new team.

BRONCOS PLAYER TO WATCH: RB Javonte Williams caught a career-high 11 passes for 65 yards, but only ran seven times Monday night despite averaging 6.1 yards per carry. Nathaniel Hackett called 42 pass plays to just 19 handoffs in his head coaching debut even though the Broncos were never that far behind.

KEY INJURIES: Texans D-linemen Maliek Collins (knee) and Rasheem Green (thigh) are banged up as is DB Isaac Yiadom (abdomen). Broncos FS Justin Simmons (thigh) will see his 66-game starting streak end. He got hurt in the second quarter of the opener, but finished the game. He went on IR this week and will miss at least a month. RG Quinn Meinerz (hamstring) is out.

SERIES NOTES: Lately these teams have been all about homecomings, Demaryius Thomas' in 2018 and Kareem Jackson's in 2019. Both were victorious, with the Texans prevailing 19-17 a week after D.T.'s trade to Houston and Jackson having a monster game at Houston a year later.

STATS AND STUFF: Last week’s tie was the first one in Texans’ history. ... QB Davis Mills threw for 240 yards with two touchdowns and no interceptions last week. ... WR Brandin Cooks led the team with seven catches for 82 yards in Week 1 and has had at least seven catches in four of his past five games. ... CB Derek Stingley Jr., the third overall pick in the draft, had seven tackles and knocked down a pass in the end zone in his debut against Indianapolis. ... LB Kamu Grugier-Hill had an NFL-high 18 tackles in Week 1. ... Rookie DB Jalen Pitre, a second-round pick, started and had 11 tackles in his debut. ... S Jonathan Owens had a career-best 15 tackles last week, the second-most tackles in the NFL in Week 1. ... DL Jerry Hughes had two sacks, an interception and forced a fumble in his debut with the Texans last week. He recovered a fumble in his previous game against Denver in 2020 with the Bills. ... LS Jon Weeks has played in 194 straight games, which is the third-longest streak in the NFL. ... QB Russell Wilson completed 29 of 42 passes for 340 yards in his Denver debut. In two career starts against Houston, Wilson has thrown for 712 yards and six TDs with one interception. ... Both Javonte Williams and Melvin Gordon lost fumbles at the goal line last week. ... WR Jerry Jeudy had four catches for 102 yards and WR Courtland Sutton had four catches for 72 yards in the opener. ... TE Albert Okwuegbunam is coming off his third career game with five or more receptions. ... OLB Bradley Chubb, who didn't have a sack in seven games last season following surgeries on both ankles, had a pair of sacks and forced a fumble at Seattle. ... OLB Randy Gregory had his ninth career forced fumble last week in his Denver debut. ... S Kareem Jackson had 11 tackles, three pass breakups and an interception in his previous game against his former team.

FANTASY TIP: WR Jerry Jeudy is coming off his first 100-yard game and his first touchdown since the final game of his rookie season in 2020.