4 safeties vying for Hall of Fame spot, 3 WRs and OLs 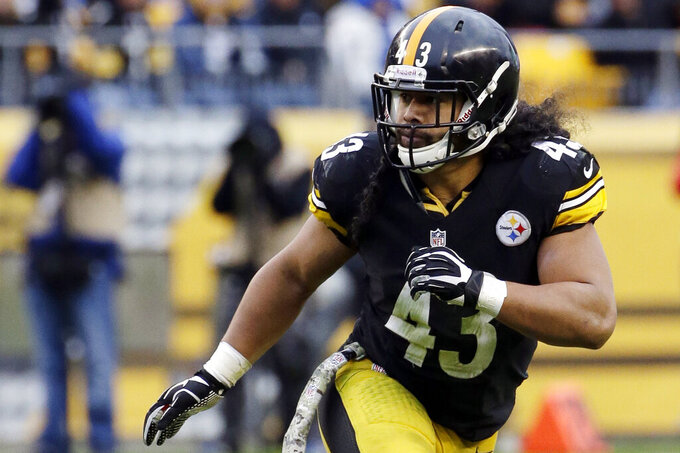 FILE - In this Nov. 10, 2013, file photo, Pittsburgh Steelers' Troy Polamalu follows the action during the second half of an NFL football game against the Buffalo Bills in Pittsburgh. John Lynch, now the general manager of the 49ers who will play the Chiefs in Sunday's Super Bowl, is up for the seventh time. Steve Atwater is a finalist for the third time. LeRoy Butler and first-year eligible Troy Polamalu complete the quartet of safeties among the 15 final candidates for the Pro Football Hall of Fame. (AP Photo/Gene J. Puskar, File) 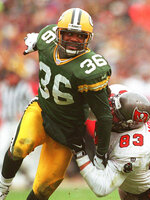 MIAMI (AP) — There are 11 pure safeties in the Pro Football Hall of Fame. Four more are seeking to join them when the Class of 2020 is selected Saturday.

John Lynch, now the general manager of the 49ers who will play the Chiefs in Sunday's Super Bowl, is up for the seventh time. Steve Atwater is a finalist for the third time. LeRoy Butler and first-year eligible Troy Polamalu complete the quartet of safeties among the 15 final candidates.

“The Hall of Fame would be unbelievable. I'm humbled every year,” Lynch says. "I've been a finalist seven times now. I don't know if it will necessarily change my life. I've been pretty blessed with my family, what I've been able to do in football. I've heard other people say that, and then they go in and say it's like happening. You never know until you're in there what it means to you.

“It would be tremendous. I'd be incredibly humbled and honored. Hopefully this is the year on Saturday.”

Butler, who starred for the Packers from 1990-2001, has had the longest wait to get to this point.

Butler won a Super Bowl for Green Bay, which had a quarterback named Brett Favre — a first-ballot Hall of Famer — leading the way.

“LeRoy was as important to our Super Bowl win and success as any other player on our team,” Favre says. "I couldn't tell you the interceptions or tackles — I know there were a lot — but his leadership and playmaking ability were outstanding. He had a knack for being in the right place at the right time. Being around the ball.

“He wasn't the most athletic guy and that might surprise a lot of people, but he was so instinctive. He made the plays; some guys get in position and don't make the plays. He had a lot of charisma about him — he was the first to jump into the stands. That's no reason to put a guy into the Hall of Fame, but the career he had definitely is worthy.”

Atwater was one of the hardest hitters at the position, an intimidating figure against the run but also a force in pass coverage. He played for a decade with Denver, winning two Super Bowls, then one year with the Jets.

Polamalu was a do-everything safety for the Steelers from 2003-14 and the 2010 NFL Defensive Player of the Year — the last safety to earn the award. He was a four-time All-Pro known for his freelancing playmaking.

The finalists from the defensive side also include lineman Richard Seymour and Bryant Young, linebackers Sam Mills and Zach Thomas.

“I feel like the closer we get to that day, the butterflies are going to start kicking in,” Wayne said on SiriusXM NFL Radio. "I'm just enjoying the wave, excited to be in this position. I know being a receiver this isn't the easy lock-in spot for the Hall of Fame. But man for me to be in this position on my first ballot, words can't describe it."

Wayne and Polamalu are the only first-year eligibles on the ballot Saturday.

The five modern-day players elected will be inducted into the Canton, Ohio, shrine on Aug. 8.

The Hall of Fame previously elected 15 members of a centennial class. They included coaches Jimmy Johnson and Bill Cowher; contributors Paul Tagliabue, the former NFL commissioner, Steve Sabol, who along with his father Ed — already a Hall of Fame member — created NFL Films, and George Young, who built the New York Giants' championship teams in 1986 and 1990.