49ers rookie DT Javon Kinlaw is his own toughest critic 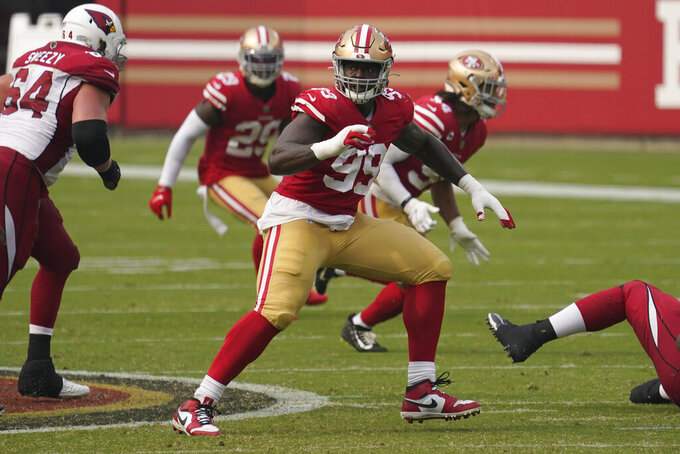 FILE - In this Sept. 13, 2020, file photo, San Francisco 49ers defensive tackle Javon Kinlaw (99) watches a play by the Arizona Cardinals develop during the second half of an NFL football game in Santa Clara, Calif. The San Francisco first-round defensive tackle has gotten off to a successful start to his career as the replacement for star DeForest Buckner in the middle of the 49ers defensive line. (AP Photo/Tony Avelar, File)

The San Francisco first-round defensive tackle has gotten off to a successful start to his career as the replacement for star DeForest Buckner in the middle of the 49ers defensive line.

“Pretty average. If we’re being honest here,” said Kinlaw about his play, although he acknowledged there has been steady improvement. “So much room to grow man. That’s the thing. So everything is just average for me.”

Kinlaw hasn’t put up splashy statistics with one quarterback hit, one batted pass and five tackles in his first three games.

He also has been very strong against the run early this season as he tries to make the Niners decision to trade away Buckner for a first-round pick that got them Kinlaw look good.

While he has set high standards of being the best defensive lineman in the game, his teammates are impressed with the path he’s on early in his career.

“I think he’s just being tough on himself,” defensive tackle D.J. Jones said. “We can all see he’s getting better week by week. At the rate he’s going, I’ll put that on his shoulders. I believe he could be an All-Pro. He’s got potential. He’s strong. ... I think the sky’s the limit for him and for him to say he had been playing good. I think he’s just making it sound good.”

Now Kinlaw will get another the chance to show what he can do when the Niners (2-1) host the Philadelphia Eagles (0-2-1) on Sunday night.

Not that the big stage of a nationally televised game excites Kinlaw.

“I’m not excited when I play. I’m very angry when I play,” he said. “It’s not excitement for me. Every game is the same no matter who’s the opponent. You look at them all the same. Of course, I’m looking forward to getting out there for another opportunity to showcase what I can do.”

Kinlaw’s play has been especially important on a banged-up line that lost starters Nick Bosa and Solomon Thomas to season-ending knee injuries and have edge rusher Dee Ford sidelined by a back injury.

That forced the Niners to call Dion Jordan up from the practice squad last week and to sign Ezekiel Ansah off the street to bolster the pass rush.

Jordan had a sack and two quarterback hits in 22 snaps in his first game last week against the Giants, while Ansah got on the field for 21 snaps after sitting out all of training camp.

“I was pumped for them,” defensive coordinator Robert Saleh said. “Those guys, especially Dion, he’s got a chip on his shoulder. He’s a lot better than people think he is and I love the way he plays, his mindset every day at practice and I love that he’s getting this opportunity and he’s taking advantage of it. Then as far as Ziggy is concerned, he hasn’t had training camp. He really hasn’t played much over the last year, year and a half and for him to get his legs underneath him, he showed some really good stuff in the game.”