Amazon Prime Video crew has made smooth transition to studio 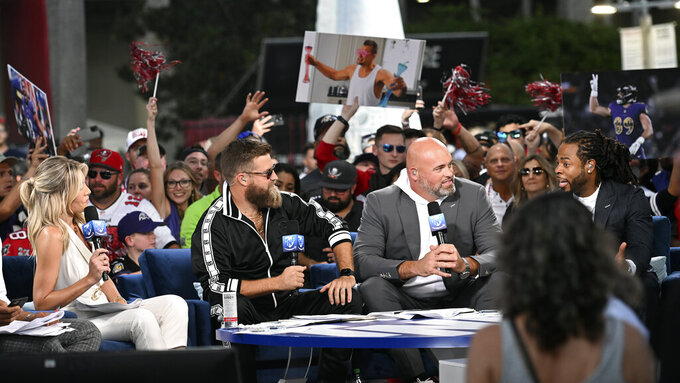 Ryan Fitzpatrick is already looking forward to next Black Friday.

The well-traveled quarterback-turned-analyst is part of Amazon Prime Video’s “Thursday Night Football” crew that will broadcast the first NFL game on the day after Thanksgiving in 2023.

Fitzpatrick, Sherman, Whitworth, Gonzalez and Thompson are onsite for most games. They’ve developed on-air chemistry by spending a lot of time together off the set, including dinners on Wednesday night before the games.

“I think that’s been a really important part of it, just getting to know everybody as an individual,” Fitzpatrick said. “Yes, I knew Tony Gonzalez the football player, but as I got to learn about his family a little bit, I got to hear dad joke after dad joke, kind of got to learn his personality and then jab him a little bit about some of his quirks and then get it thrown right back at me. It is a lot like a locker room in that respect.”

Fitzpatrick, who played for nine teams in 16 seasons in the NFL, called Thompson the QB of the team.

“I think Charissa has, especially early on, done an amazing job of just keeping us in line,” he said. “We had three new guys on the desk that had never done this before. And she did such a great job of directing traffic and helping us figure it out. As we’ve gone throughout the season, the chemistry has become a lot better, especially that on-air chemistry of who’s talking and when and what points can be made, how quickly a point has to be made. And so Charissa is definitely still the quarterback, but having to manage a little bit less and having to babysit a little bit less than she did at the very beginning of the season.”

Sherman, who played 11 seasons with Seattle, San Francisco and Tampa Bay, has enjoyed building new relationships with his new teammates.

Whitworth, a Super Bowl champion with the Los Angeles Rams last season, had the least experience talking in front of cameras of anyone on the crew.

“When you’re an O-lineman, my version of the media is somebody with a tape recorder and the whole locker room is cleared, and it’s just me and the one tape-recorder person asking me a couple of questions,” Whitworth said. “There’s no pressure, no stress and nobody really cares that much unless you say something that’s flashy. When you talk about being raw, I literally had zero experience. I think my biggest press conference ever was the day I retired.”

Whitworth quickly caught on by being authentic.

“I’m just going to literally be who I am,” he said.

Part of that is wardrobe and appearance. FitzMagic has the big beard. Whitworth wears hoodies under his jacket.

“At our production meetings, he’s giving locker-room speeches,” Donoghue said before the Ravens played the Buccaneers in a Thursday night game last month. “He almost had us in tears.”

When Amazon and the NFL signed an 11-year agreement — the first time the league sold a package of games to a streaming service — Donoghue set out to put together a crew with unique perspectives.

“We spent a lot of time with a lot of different talent,” she said. “We wanted energy, excitement and good teammates, people who work really hard together and have fun doing it. We wanted to bring something new to fans. We quickly zeroed in on having folks off the field. These guys have gotten better hour to hour, they’re getting more comfortable. They’ve had chemistry from Day 1. It’s been spectacular. We have a really high bar. We’re thrilled where we are and we’re only getting better.”