Another bad QB performance may force Judge to start Fromm 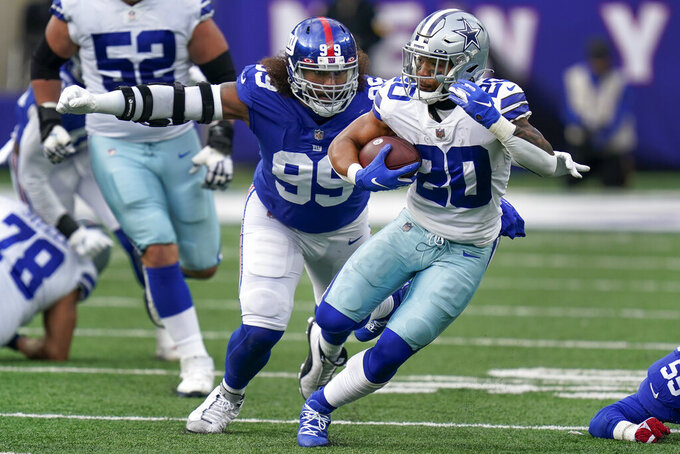 EAST RUTHERFORD, N.J. (AP) — The New York Giants' season will end in less than three weeks with many major decisions to be made.

The fans obviously are not happy. About half of them didn't show up for New York's 21-6 loss to Dallas on Sunday at MetLife Stadium. Not surprisingly, their seats were filled with Cowboys fans enjoying the team's 10-4 record.

Some Giants questions have to be addressed now.

The team announced Monday that quarterback Daniel Jones is being shut down for the season because of a sprained neck that caused him to miss the last three games, all losses.

Coach Joe Judge has to decide whether to start veteran Mike Glennon or untested Jake Fromm, who was signed off the Buffalo Bills practice squad after Jones was hurt on Nov. 28.

Glennon is a 32-year-old journeyman, who has started the last three games. He was 13 of 24 for 99 yards against Dallas. Fromm got the last series and was 6 of 12 for 82 yards, with his drive stalling at the Cowboys 9.

Glennon will be a free agent after this season. The 23-year-old Fromm had great success at Georgia and looked good in garbage time against Dallas.

“Obviously there’s a big difference between starting an NFL game and coming in at the end of the game, when teams play more of a two-minute prevent mode,” Judge said. “That's not a knock on Jake. It’s the reality and truth.”

Down the road, the Giants are going to face bigger decisions after another disappointing season. The biggest ones will involve Judge and general manager Dave Gettleman.

After a 6-10 record in his rookie season raised some hopes, Judge's stock has fallen. Whether the former Patriots special teams coordinator gets a third year needs to be decided.

For now, the Giants will be playing out the string.

“I mean, now more than ever, you got to put your head down, kind of block out any distractions you got going on, it and really give it your all,” Giants defensive back Julian Love said of the final three games. He added guys play for pride and the right to be back next season.

Obviously, some people won't be back.

The Giants' don't give up big plays. The Cowboys' biggest play Sunday was a 19-yard pass from Dak Prescott to Michael Gallup. For the season, the Giants have given up only three long touchdowns: A 70-yard run by Denver's Melvin Gordon in the season opener; a 49-yard TD pass Prescott to CeeDee Lamb on Oct. 10; and a 59-yard bomb from Justin Herbert of the Chargers to Jalen Guyton on Dec. 12. For the season, Pat Graham's defense has allowed 10 plays of 30 or more yards. It's kept the Giants in games, for the most part.

Judge's decisions. Down 15-6 late in the third quarter, the coach decided to gamble on fourth-and-1 from the Giants 29. It was a questionable call. Having Glennon try to sneak for a yard wasn't smart because he doesn't run as well as Jones. Either Saquon Barkley, Devontae Booker or Eli Penny would have been a better choice.

Also, Glennon should have been lifted a lot earlier.

Lorenzo Carter. The outside linebacker got noticed Sunday. He had two of the Giants' three sacks and forced a fourth-quarter fumble by Prescott on a strip-sack. He also had four tackles and a nice pass defense early after taking a good drop.

Glennon. He threw three interceptions. The first pick was an O-line breakdown. The next two were on him. The 32-year-old QB also needs to find a way to get less than a yard on a fourth-down sneak from his 29 in the third quarter. The ball should have gone to a running back, but Glennon needs to bull his way over the line.

Receiver Sterling Shepard's injury-marred season is over. He injured his Achilles tendon with 1:26 to play. Rookie RB Gary Brightwell left in the first half with a neck injury. ... The Giants hope to get some players back from the reserve/COVID-19 list. CB Aaron Robinson, WR John Ross and LBs Oshane Ximines and Cam Brown all missed Sunday.

6 — times the Giants have scored 13 points or less in a game. They are 1-5 in those contests, beating Philadelphia 13-7.

The Giants head down the New Jersey Turnpike to play the Eagles on Sunday.