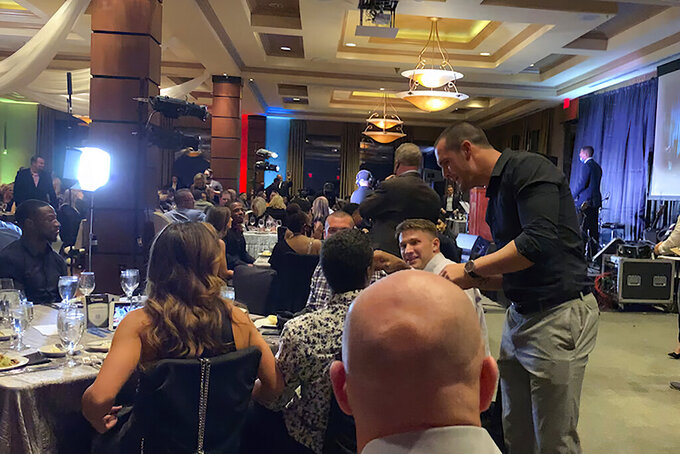 In this still image taken from video, Las Vegas Raiders quarterback Derek Carr, right, meets with people at a charity event held by teammate Darren Waller on Monday, Sept. 28, 2020, in Henderson, Nev. Several Las Vegas Raiders players attended a charity event held by teammate Darren Waller that might have violated league rules for the coronavirus pandemic. The Darren Waller Foundation held a fundraising event at a country club just outside Las Vegas to help young people overcome drug and alcohol addiction. Players were seen on video without masks during the indoor event while talking and mingling with guests, who also weren't wearing masks. (Cassie Soto/Las Vegas Review-Journal via AP)

Darren Waller and several Las Vegas Raiders teammates have been fined for attending his charity event that violated COVID-19 protocols.

A person familiar with the punishment said Monday that Waller was fined $30,000 and his teammates were docked $15,000 each for their actions at last week’s fundraiser for his foundation. The person spoke on condition of anonymity because the punishments weren’t announced by the league.

“I’m well aware of that, yes,” coach Jon Gruden said Monday. “I know our players are going to handle them individually. I know they regret any harm they may have caused. They’re very sensitive about it and we’ll handle it the right way. I’m going to reiterate, I’m really proud of our players and our staff and the job that we’ve done battling this virus, and it’ll continue."

Players were seen without their masks mingling with guests, who also didn’t have face coverings. The city of Henderson fined the DragonRidge Country Club $2,000 for four violations of the Nevada governor’s COVID-19 emergency directives, including people not wearing masks and more than 50 people at the event.

“We tried our best even at the event with everything, and we weren’t perfect but we were trying our best,” Carr said last week. “We weren’t trying to be careless or reckless.”

This is just the latest punishment handed to the Raiders for violating COVID-19 protocols this season.

Gruden was fined $100,000 and the team docked $250,000 when Gruden didn’t properly wear his mask on the sideline during the game against the Saints, the person said on condition of anonymity.

The person also said the Raiders were fined $50,000 for allowing an unauthorized employee in the locker room following that game.

Gruden said last month that he had the coronavirus in the offseason.