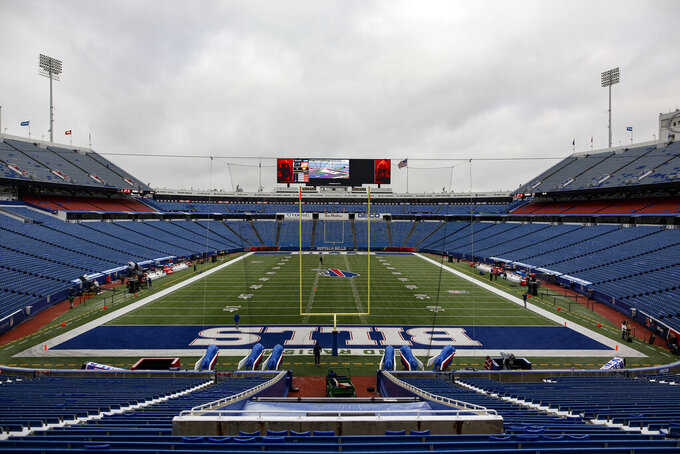 FILE - The field is prepared at Highmark Stadium before an NFL football game between the Buffalo Bills and the Carolina Panthers, Dec. 19, 2021, in Orchard Park, N.Y. The Bills moved closer to landing $200 million in NFL funding to help finance their bid to build a new stadium, a person with direct knowledge of the situation told The Associated Press on Friday, March 25, 2022. (AP Photo/Joshua Bessex, File)

BUFFALO, N.Y. (AP) — The Buffalo Bills moved closer to landing $200 million in NFL funding to help finance their bid to build a new stadium in which a majority of the projected $1.354 billion price tag is anticipated to be covered by taxpayer dollars.

A person with direct knowledge of the decision told The Associated Press on Friday that the NFL’s stadium and finance committee backed the Bills’ request for what’s called a G4 loan, by recommending the team’s application be presented at the league’s owner meetings for final approval. The person spoke on the condition of anonymity because the decision was made privately.

The committee’s approval was anticipated, and it will require 24 of the NFL’s 32 owners to formally OK the loan during a vote scheduled to take place on Monday.

Under the G4 program rules, Bills owners Terry and Kim Pegula would be required to put up matching dollars which would increase the private funding to at least $400 million for the new stadium.

The committee’s backing opens a critical week for the proposed project with New York Gov. Kathy Hochul facing a deadline to have an agreement in place in time to include the state’s share of funding in her budget, which by law must be approved on April 1.

Hochul previously expressed confidence in reaching a deal with the Bills before the deadline. Even though she submitted a $216 billion budget in January, Hochul said there are numerous options at her disposal to draw upon the necessary money to fund the project.

While the parties, which include Erie County, have been closing in on an agreement over the past month, what’s unclear is how much public money will be required to secure the long-term future for the small-market Bills, who are the NFL’s lone team based in New York.

It’s anticipated taxpayers will be on the hook for more than 60% of the cost, with Hochul and Erie County Executive Mark Poloncarz pushing back on suggestions the public price tag will be $1 billion.

The NFL’s $200 million contribution was already factored in to be part of the funding package for the proposed 60,000-plus seat facility to be built across the street from the Bills current stadium in Orchard Park.

The NFL’s G4 funding is actually considered a loan, and repaid primarily from visiting team’s share of certain seating.

As for the Pegulas’ share, the owners could recoup part of their money by having Bills season-ticket holders, for the first time, be required to pay personal seat-licensing fees, which would have the potential of doubling the price of their ticket packages.

The Bills are seeking to replace their existing facility which opened in 1973 and was deemed too expensive to renovate. A state study in November pegged renovation costs at $862 million.

If approved, the Bills project the new facility could be built in time for the start of the 2026 season.

The Bills’ existing lease with the state and county runs through July 2023.