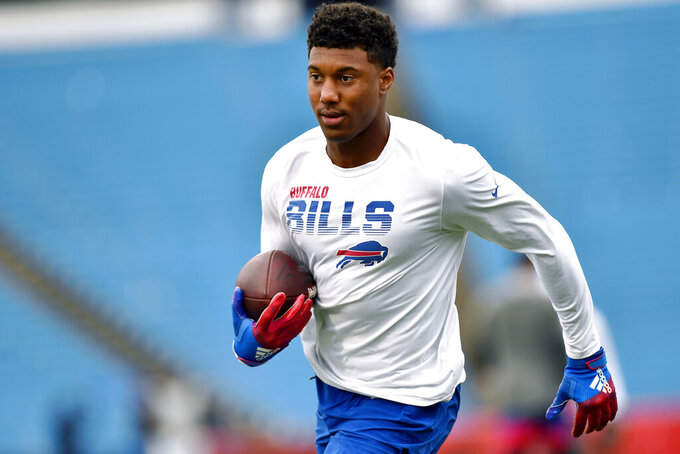 ORCHARD PARK, N.Y. (AP) — Receiver Zay Jones is going from the end of the Buffalo Bills bench to landing a fresh start with the Raiders after being traded to Oakland, a person familiar with the deal confirmed to The Associated Press on Monday.

Buffalo acquired a fifth-round pick in the 2021 draft, according to the person who spoke on the condition of anonymity because the trade has not been announced. ESPN.com first reported the deal.

The trade comes as both teams enter their bye weeks, and a day after Jones sat on the Bills bench for all but one snap in a 14-7 win at Tennessee.

Rookie Duke Williams took over Jones' role as the No. 3 receiver and scored the decisive touchdown on a 7-yard catch in the fourth quarter a day after being promoted from the practice squad. Jones was upbeat following the game, and drew praise from Williams for providing him support before and during the game.

Jones' benching came a week after he was faulted for not helping break up one of three interceptions thrown by Josh Allen in a 16-10 loss to New England. He also had a potential go-ahead touchdown glance off his fingertips in the end zone in the fourth quarter.

Buffalo is 4-1, while Oakland improved to 3-2 following a 24-21 win over Chicago in a game played at London.

The Raiders, who are off until playing at Green Bay on Oct. 20, have an injury depleted group of receivers with starters Tyrell Williams and J.J. Nelson both sidelined.

Coach Sean McDermott provided no hint of the possibility of Jones being traded while speaking to reporters earlier in the day.

McDermott referred to Jones as someone who is continuing to develop.

"I think he's still young in his career and he'll continue to do a good job as he continues to focus on what he can control," McDermott said. "I really appreciated the way he took a team-first approach yesterday."

The third-year player struggled this season in attempting to carve a niche in a retooled group of receivers following Buffalo's offseason additions of free agents John Brown and Cole Beasley.

Jones has just seven catches for 69 yards despite being targeted 18 times. That's a significant drop-off for a player who led Buffalo with 56 catches, 652 yards and seven touchdowns last season.

The Bills drafted Jones with a second-round pick in 2017 out of East Carolina after he had an FBS-leading 158 catches and 1,746 yards.

He is the son of former NFL linebacker Robert Jones, who won two Super Bowls with Dallas Cowboys in the early 1990s.

Zay Jones had a frightening meltdown following his NFL rookie season. He was arrested but not charged in February 2018, when police found him found him naked and bloodied after trashing a downtown Los Angeles apartment.