AP source: Texans get Tunsil, Stills in trade with Dolphins 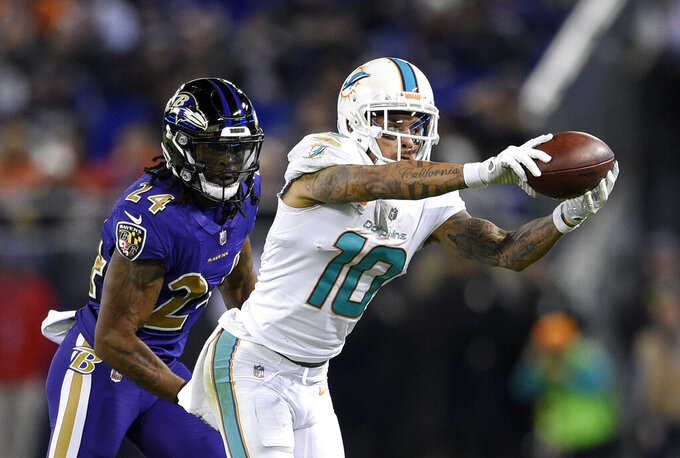 HOUSTON (AP) — The Houston Texans continued a busy day of trades on Saturday by addressing a glaring need to upgrade their offensive line by acquiring left tackle Laremy Tunsil from the Miami Dolphins in a deal which also netted them receiver Kenny Stills, a person familiar with the deal tells The Associated Press.

The person spoke on the condition of anonymity because the trade had not yet been announced.

Miami will receive two first-round picks, one in the second and will also get offensive tackle Julién Davenport and cornerback Johnson Bademosi in the deal. The Texans will get a fourth-round pick in the trade, which comes after they agreed to a deal to ship 2014 top overall pick Jadeveon Clowney to the Seahawks earlier on Saturday, according to two people who spoke to the Associated Press on condition of anonymity.

Tunsil immediately improves a line which allowed Deshaun Watson to be sacked an NFL-leading 62 times last season. Tunsil, the 13th overall pick in the 2016 draft, has started 44 games for the Dolphins in the past three seasons. The Texans signed veteran left tackle Matt Kalil in the offseason to protect Watson's blind side, but the 25-year-old Tunsil will be a much better option after Kalil has struggled with injuries for years.

Despite Tunsil being considered one of the league's top left tackles, the Dolphins considered him expendable because they're in the early stages of a multiyear makeover under first-year coach Brian Flores. They were unable to reach a deal on a contract extension with him after exercising a fifth-year option on his rookie contract for $10.35 million in 2020.

He made headlines when a bizarre video of him smoking from a gas mask-bong contraption was posted on his Twitter account shortly before the 2016 draft began. That caused him to fall in the draft and be available for Miami to pick him.

Stills joins a solid receiving group in Houston led by DeAndre Hopkins, which also has Will Fuller and Keke Coutee, who have both missed significant time with injuries. Stills spent his first two seasons in New Orleans before playing for the Dolphins for the past four seasons.

Things are more complicated off the field where Stills recently criticized the politics of team owner Stephen Ross and was razzed by his coach on the subject of Jay-Z.

He is outspoken on social issues, and has been kneeling during the national anthem for the past four seasons to protest racial inequality and police brutality. But the Dolphins' decision to trade him may have been based on football.

Stills has 24 touchdown catches in the past four seasons for Miami. But he's in the third season of a $32 million, four-year contract, which made him expensive and expendable as the Dolphins rebuild and expect to be also-rans in 2019.

In early August, Stills objected to Ross hosting a fundraiser for President Donald Trump, and said there was a contradiction in the Dolphins owner supporting both the president and racial equality. Stills said he later spoke with Ross and they agreed to disagree while harboring no hard feelings.

Last week, Stills objected to remarks from Jay-Z about social activism by current and former NFL players. The next day Flores had more than half a dozen songs by the rapper played at the start of practice.

Flores expressed a concern that Stills was distracted by "what's going on outside," and said the receiver's performance in training camp had been disappointing.

The Dolphins have repeatedly denied they're tanking in 2019. But they're widely expected to be among the NFL's worst teams, and the trade increases the likelihood they'll secure a high draft pick and take a franchise quarterback in the first round next April.

The Texans also acquired running back Carlos Hyde in a trade with Kansas City for offensive tackle Martinas Rankin on Saturday to add depth after losing starter Lamar Miller to a season-ending knee injury.