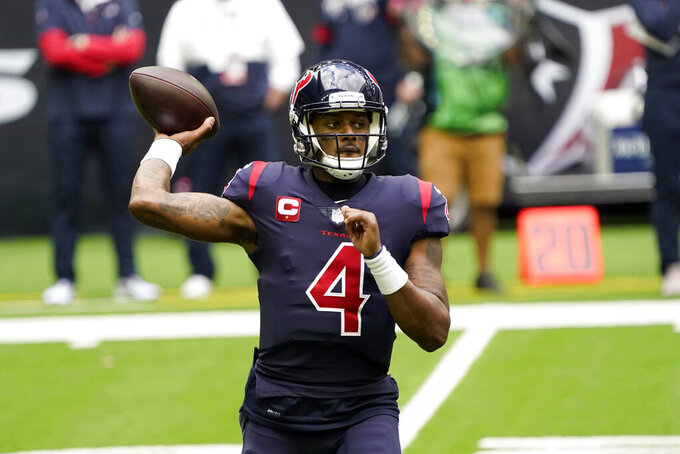 File-This Dec. 27, 2020, file photo shows Houston Texans quarterback Deshaun Watson (4) throwing a pass against the Cincinnati Bengals during the first half of an NFL football game in Houston. Watson plans to report to training camp with the Houston Texans. (AP Photo/Sam Craft, File)

The person spoke to the AP on the condition of anonymity because they were not authorized to speak publicly on the matter. The person added that the quarterback still wants to be traded and is reporting solely to avoid being fined.

Watson would have faced fines of $50,000 a day if he didn’t report. Players were reporting for COVID-19 testing and meetings on Sunday with practice scheduled to begin on Wednesday.

Watson led the NFL in yards passing last season and signed a four-year, $156 million contract extension with the Texans last offseason. But he became unhappy with the direction of the team and requested a trade in January after the Texans, who won the AFC South in 2018 and '19, sunk to 4-12 last season.

His future was further clouded in March after 22 women filed lawsuits alleging that he sexually assaulted or harassed them. Houston police and the NFL are investigating the allegations, but no charges have been filed.

General manager Nick Caserio has mostly avoided questions about Watson’s future, but has said that the team is “respectful of the legal process.” New coach David Culley has outright refused to answer questions regarding about the quarterback this offseason.

Caserio signed veteran Tyrod Taylor to a one-year deal in March to give the team an insurance policy at quarterback if Watson can’t or won’t play this season. The Texans drafted Stanford’s Davis Mills in the third round of this year’s draft, and he and Jeff Driskel, a recent free agent signee, will likely compete to back up Taylor if Watson isn’t an option.