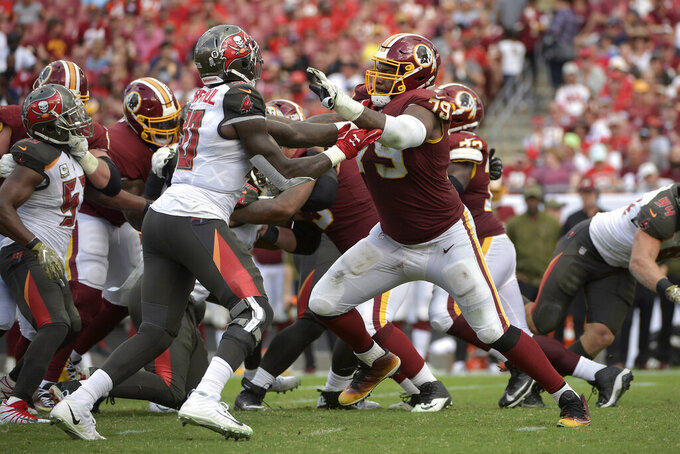 The Bills continued their major foray into free agency on Tuesday by agreeing to sign receivers John Brown and Cole Beasley and offensive linemen Ty Nsekhe and Jon Feliciano.

The people spoke to the AP on the condition of anonymity because the signings won't be official until the NFL's new year begins Wednesday.

The deals come a day after the Bills agreed to sign center Mitch Morse, running back Frank Gore and tight end Tyler Kroft. Buffalo confirmed Tuesday that it signed cornerback Kevin Johnson to a one-year contract.

The Bills' main focus has been addressing needs on offense to upgrade a unit that finished 30th in yards gained during Allen's rookie season and was hampered by a lack of established receivers and a patchwork offensive line.

Buffalo entered the signing period with more than $70 million available to spend under the salary cap after spending the previous two offseasons purging its roster of high-priced players. The overhaul coincided with coach Sean McDermott's hiring in January 2017 and was followed by general manager Brandon Beane taking over five months later.

Beane has taken a bold approach in rebuilding the Bills by spending the past two years trading away veterans — including defensive tackle Marcell Dareus, offensive tackle Cordy Glenn and quarterback Tyrod Taylor — and stockpiling draft picks.

After a 6-10 finish, Beane in January said he intended to be "judicious" in filling holes in free agency, while continuing to add talent in the draft next month, when the Bills are scheduled to have 10 picks.

Johnson, speaking on a conference call with reporters Tuesday, was impressed by the new additions.

"I think you can see this is a team on the rise," he said. "We're just trying to add to this culture, and they've got a good one in place. And like I am, I'm sure the other guys are ready to come in here and work."

Brown had 42 catches for 715 yards and five touchdowns last year in his only season with the run-oriented Baltimore Ravens.

The Bills targeted Brown in free agency a year ago, but he turned them down in part because Buffalo was unsettled at quarterback after trading away Taylor and before drafting Allen in the first round.

Beasley spent his first seven seasons with Dallas and had a 65 catches for 672 yards and three touchdowns last year. Beasley's most productive season was in 2016, when he had 75 catches for 833 yards and five touchdowns.

Running back LeSean McCoy took notice of the offensive line additions by posting a note on his Twitter account that read: "It's always good signing fat boys hahahahah welcome welcome."

Nsekhe has five NFL seasons of experience dating to 2012 with the then-St. Louis Rams. He spent the past four seasons with Washington, where he had 16 starts in 54 games playing behind tackles Trent Williams and Morgan Moses, while also getting playing time at guard.

Feliciano spent his first four seasons with Oakland, where he had eight starts in 48 career games. The Raiders selected him in the fourth round of the 2015 draft.

Johnson joins a defense that allowed the second-fewest yards last season and will compete for the starting job opposite Tre'Davious White. Johnson's first four seasons in Houston were hampered by a series of injuries, including a pair of concussions that forced him to miss the final 15 games of last season.

"All that stuff's behind me," he said. "I think I learned that I don't got any quit in me. I went through a lot of things, adversity as far as dealing with injuries. And every time, I came back strong from it."

Johnson is reunited with Bills defensive backs coach John Butler, who held the same role in Houston from 2014-17.