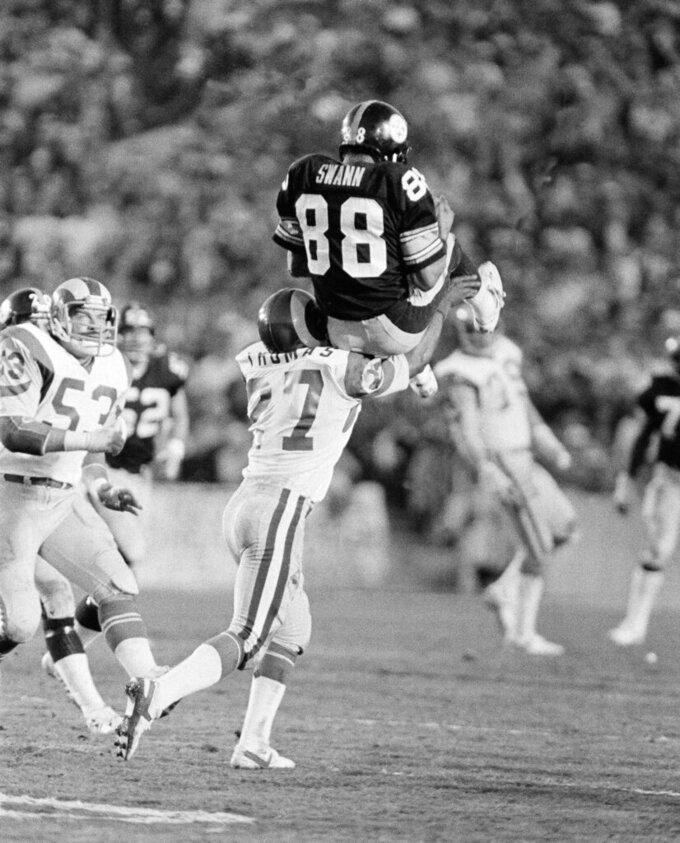 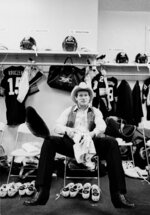 PASADENA, Calif. (AP) — The Pittsburgh Steelers came in the heavy favorites with the Los Angeles Rams a double-digit underdog. That didn't stop Terry Bradshaw from struggling to sleep the night before over the thought of losing instead of clinching an unprecedented fourth Super Bowl ring. The Steelers trailed 19-17 as the fourth quarter began at the Rose Bowl before more than 103,000 people. The Associated Press is republishing verbatim the story on Bradshaw and Pittsburgh beating the Los Angeles Rams 31-19 for those Steelers' last Super Bowl championship in Pasadena on Jan. 20, 1980:

It was a different kind of Super Bowl for Terry Bradshaw and the Pittsburgh Steelers.

Oh, nothing so serious as the outcome. The Steelers won the National Football League championship game, beating off a determined Los Angeles challenge 31-19 as Bradshaw shattered two passing records while firing a pair of touchdown bombs to Lynn Swann and John Stallworth.

It was an unprecedented fourth Super Bowl crown for the Steelers, but Bradshaw said it was the first one he really worried about.

“I couldn't shake the thought of losing,” the quarterback said. “And I couldn't sleep last night. It was the first time that's happened to me.”

“I decided we'd win 28-7 and Benny Cunningham would be the hero,” he said.

Only one part of the prediction paid off, but it was the important one: the Steelers victory.

“It was the most satisfying Super Bowl,” said Bradshaw, named the game's most valuable player for the second straight year. “We had a chance to set some history, and we did it.”

The team history was a fourth championship and the personal histories were Super Bowl records for career yardage and touchdowns. Bradshaw hit Swann with a 47-yarder and busted the game open with a 73-yard pass play to Stallworth that brought Pittsburgh from behind in the fourth quarter.

“The TD to Swann was a delayed blitz,” the quarterback said. “I didn't see the catch. I only heard the crowd.”

“We had a chance for an interception on Swann's catch,” said Los Angeles coach Ray Malavasi, recalling how the Pittsburgh receiver had made an acrobatic catch between two defenders.

But the play of the game was the 73-yarder to Stallworth.

“That was against a prevent defense on third down,” Bradshaw said. “It was a hook and go from the slot. All we've run off that play all year is a hook and slide.”

The Steelers had put in the wrinkle last week, and Bradshaw wasn't happy with it until Sunday. “It's a funny thing,” he said. “I ran it eight times in practice, and it didn't work at all.”

Defensive back Eddie Brown took the responsibility for Stallworth's catch. “I just blew it,” he said. “I should've gone in the middle, but I took the outside receiver instead of the inside. I played it like we had five defensive backs, but we had six. I should have been there.”

Malavasi agreed. “We had an audible busted on that one,” he said.

The two long passes were the difference as the Steelers wore down the persistent Rams. But it was no simple task, and Bradshaw's pregame jitters proved justified.

Derided as 11-point underdogs, Los Angeles played inspired football and led 19-17 as the fourth quarter began. What's more, by then Bradshaw was operating without Swann, who was knocked out on a crushing hit by cornerback Pat Thomas in the third period.

But the veteran Pittsburgh quarterback would not be denied. On the Steelers' first possession of the final quarter, he faced a third-and-8 at his 27-yard line.

The Steelers sent Stallworth on a fly pattern down the middle of the field and Bradshaw led his man perfectly. The fleet wide receiver simply outsprinted cornerback Thomas and caught the ball easily, dashing into the end zone with the touchdown that put Pittsburgh in front 24-19.

Now Vince Ferragamo, the gallant young quarterback of the Rams, who was starting only his eighth professional game, tried to bring his team back. Passes of 24 yards to Preston Dennard and 15 to Billy Waddy had the Rams on the move at the Pittsburgh 32 as the capacity Rose Bowl crowd of 103,985 roared in excitement.

But the bubble burst for the youngster, who inherited the starting job in a sea of midseason injuries, on the next play. He pressed his luck, trying for one more pass, and it was one too many.

Middle linebacker Jack Lambert intercepted for the Steelers and Bradshaw went to work.

Again he launched a long pass for Stallworth, who gathered in the 45-yard pitch, carrying Pittsburgh to the Los Angeles 33. It was Stallworth's third catch of the day and pushed his yardage total to 121.

A pass interference call against Thomas in the end zone followed, and with the ball on the 1-yard line, Franco Harris barreled in for his second touchdown of the game — wrapping up the Steelers victory.

Bradshaw's two touchdown passes gave him nine for his Super Bowl career, one better than the mark held by Roger Staubach of Dallas. He finished with 309 yards for the game, pushing his career total on these extravaganzas to 932 — another record.

The performance earned Bradshaw the game's Most Valuable Player award for the second consecutive year, making him only the second man in Super Bowl history to win the honor a second time. Bart Starr of Green Bay was voted MVP honors in each of the first two Super Bowls.

For three periods, this game — one of the most exciting in the history of the contest — belonged to the underdog Rams, a lame-duck team that was often booed through the season and came into this final game as a distinct long shot against the awesome Steelers.

They held a 13-10 halftime lead, and fans sitting through a spectacular halftime show that seemed to set the Rose Bowl into a huge Roman candle wondered if the magic could continue in the second half. But for thousands of the fans who had taken the long journey from Pittsburgh bringing their black-and-gold hats and jackets, the halftime had to be an upsetting interlude as they waited to see if, indeed, the Steelers could come back.

Bradshaw and Swann provided the answer with only 2:48 gone in the second half.

Swann fought off Nolan Cromwell and Thomas to make an acrobatic catch of Bradshaw's 47-yard pass and Pittsburgh regained the lead, 17-13.

But the Rams weren't through yet, coming back with a little magic of their own. Ferragamo hit Waddy with a 50-yarder that moved the Rams from their 28 to Pittsburgh's 24. On the next play, Lawrence McCutcheon took a handoff, and on a halfback pass found Ron Smith for a touchdown.

It was McCutcheon's first pass attempt all season.

Frank Corral, who had kicked a pair of first-half field goals, missed the extra point, and the Rams' lead was a tenuous 19-17.

But the final 15 minutes were decisive for the Steelers.

The Rams' halftime lead came on Corral's second field goal of the game, a 45-yarder that was just 3 yards short of the Super Bowl record set by Jan Stenerud of Kansas City in 1970.

The inspired first-half play seemed to awaken a legion of Los Angeles fans, who were all but swallowed up in in the sea of gold and black that enveloped the Rose Bowl. Rams fans, tentative at first, were cheering for their team by halftime.

That has been an unusual sound to the ears of the Rams, who are moving down the freeway to Anaheim next season.

No Super Bowl has ever been tied at halftime. Thanks to Dave Elmendorf's interception and Corral's second field goal, that pattern continued Sunday.

But the Steelers have never lost a Super Bowl, either, and — thanks to Bradshaw's second-half magic — that pattern continued as well.