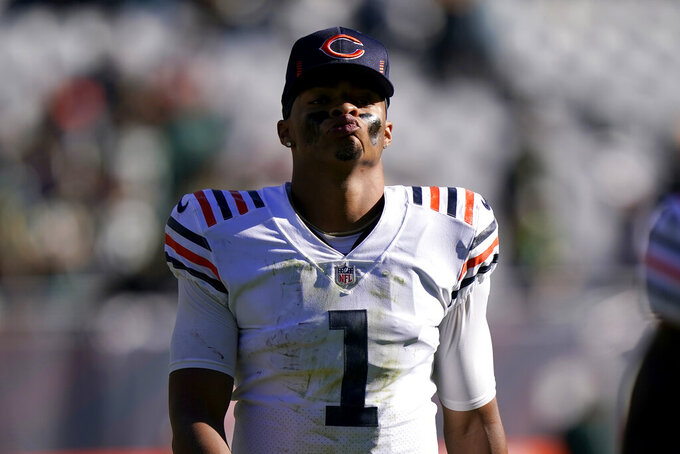 OPENING LINE: Tampa Bay by 12 1/2, according to FanDuel SportsBook.

TURNOVER DIFFERENTIAL: Bears plus-2; Buccaneers plus-3.

BEARS PLAYER TO WATCH: LB Khalil Mack. The Bears could be missing one of their top pass rushers after linebacker Robert Quinn was placed on the reserve/COVID-19 list on Tuesday. That would mean even more attention on Mack. The three-time All-Pro leads the team with six sacks. The resurgent Quinn is right behind him with 5 1/2 after finishing with just two last season — his first in Chicago. The Bears are tied with Minnesota for the league lead with 21 sacks.

BUCCANEERS PLAYER TO WATCH: The Bucs haven’t had a 100-yard rusher this season, however RB Leonard Fournette has three consecutive games with 110-plus total yards from scrimmage, providing much-needed balance to one of the NFL’s most prolific offenses. The fifth-year pro ran for 81 yards on 22 carries and rushed for a pair of touchdowns in last week’s win over the Eagles. He also had six receptions for 46 yards.

KEY MATCHUP: Bucs offensive line vs. the Mack-led Bears pass rush, which was one of the keys to Chicago’s 20-19 win over the Super Bowl champions last season. Tampa Bay’s O-line has yielded nine sacks, fifth fewest in the league.

KEY INJURIES: The Bears were missing their top two running backs last week, with David Montgomery (sprained knee) on injured reserve and Damien Williams on the COVID-19 list. Montgomery, the team’s leading rusher, is missing his third game in a row. Backup S Deon Bush (quad) will miss at least the next three games after being placed on IR. He exited the loss to Green Bay. Mack (foot), wide receiver Allen Robinson (ankle), defensive tackle Akiem Hicks (groin) and returner Jakeem Grant (ankle) are also banged up. ... The Bucs are hopeful that safety Antoine Winfield Jr. (concussion) can return after sitting out two games. The uncertain status of TE Ron Gronkowski (ribs), who’s missed the past three games, could linger into the weekend. Meanwhile, the defense could be without linebacker Lavonte David, in addition to cornerbacks Carlton Davis (quadriceps) and Richard Sherman (hamstring).

SERIES NOTES: The Bears have won the past two meetings in the series between one-time NFC Central rivals. ... Bucs quarterback Tom Brady is 5-1 lifetime against the Bears, with the lone loss coming last season, the seven-time Super Bowl champion’s first with Tampa Bay. In those six career meetings with Chicago, Brady has thrown for 308 yards per game and 15 touchdowns.

STATS AND STUFF: The Bears are scoring 16.3 points per game. Only Houston and the New York Jets are averaging fewer. ... In six games and four starts, rookie QB Justin Fields has completed 53 of 99 passes for 632 yards, two touchdowns and three interceptions. He has also been sacked 18 times for a league-leading 163 yards. ... Rookie RB Khalil Herbert has 172 yards rushing the past two games, after running for 97 and his first career touchdown last week. ... Mack and Quinn have combined for more sacks than any other defensive duo in the NFL: 11 1/2. Cleveland’s Myles Garrett and Jadeveon Clowney are second with 11. ... LB Roquan Smith ranks fourth in the league with 62 tackles. ... WR Darnell Mooney leads the Bears in receptions (25) and yards receiving (306). ... K Cairo Santos has made a club-record 34 consecutive regular-season field goals, the longest active streak in the NFL. ... Brady, at age 44, leads the NFL in passing yards (2,064) and is second in TD passes (17). ... Fournette has 376 total yards from scrimmage over the past three weeks, third in the NFL over that span behind Derrick Henry (463) and Jonathan Taylor (441).

FANTASY TIP: Bucs wide receiver Antonio Brown had nine catches for 93 yards and one touchdown in last week’s 28-22 victory at Philadelphia. He’s faced Chicago twice during his career and had 19 receptions for 306 yards and three TDs in the two games.