Up in arms: Elway still searching for Broncos' quarterback 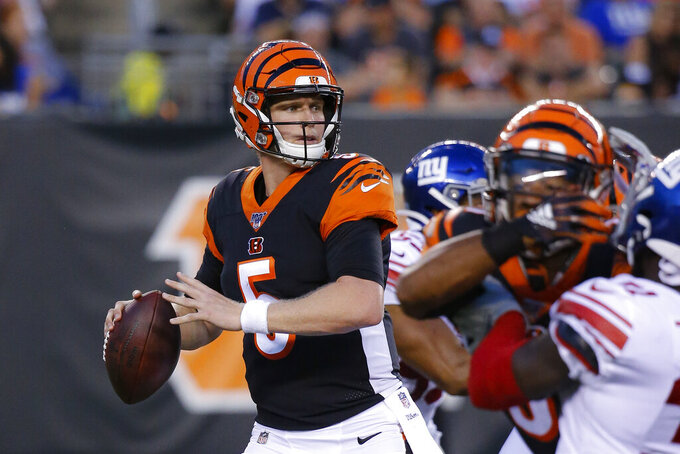 FILE - In this Aug. 22, 2019, file photo, Cincinnati Bengals quarterback Ryan Finley (5) looks to pass during the first half of an NFL preseason football game against the New York Giants, in Cincinnati. The winless Bengals benched Andy Dalton heading into their bye week, ending his nine-season run as starter so they can start developing rookie Ryan Finley as his potential long-term replacement. The move came two days after a 24-10 loss to the Rams in London left Cincinnati 0-8 for the first time in 11 years. (AP Photo/Frank Victores, File)

DENVER (AP) — With Joe Flacco joining Drew Lock on injured reserve, the Broncos head into Sunday's game against the Browns with two quarterbacks, Brandon Allen and Brett Rypien, who haven't thrown a single pass in the NFL.

Allen is a 27-year-old, fourth-year pro from Arkansas who becomes Denver's sixth starting quarterback in the post-Peyton Manning era when the Broncos (2-6) host the Browns (2-5).

His backup is the nephew of 1992 Super Bowl MVP Mark Rypien and was promoted from the practice squad Friday when Flacco went on IR with a herniated disk in his neck.

The quarterback that general manager John Elway really needs to get on the field is Lock, according to the arguments raging on airwaves and social networks. That way, he can see what he has in the rookie before diving into next year's draft.

It's a safe bet Elway will draft another quarterback in sixth months whether Lock, a second-rounder out of Missouri, plays this season or not, whether he lights it up, stinks it up or shuts it down.

The Broncos appear headed for a prime draft slot and Elway owns seven picks in the first four rounds and could have as many as a dozen selections once the compensatory formula is factored in.

The Bengals (0-8) decided this week to bench Andy Dalton so first-year coach Zac Taylor can see what he has in fourth-round pick Ryan Finley, and the Redskins (1-7) are giving first-rounder Dwayne Haskins his first start Sunday at Buffalo, but that's because Case Keenum is still in concussion protocol.

Finley and Haskins may very well be the future of their franchises.

Finley has been getting live reps in Cincinnati, unlike Lock, whose sprained thumb in the preseason landed him on IR and stunted his growth as a pro QB, prompting Elway to declare he's not ready to return to practice.

Lock has been limited to virtual reality training and classroom work. Once he returns to practice this month, he'll resume his transition from the shotgun and spread he ran in college to the pro system that calls for him to line up under center, progress through reads while backpedaling and refine his footwork and release points.

Lock was eligible to return to practice Oct. 14, but the Broncos delayed a decision in case they got back into contention and needed to activate players at other positions from injured reserve.

Because they'll have a 21-day clock upon Lock's return to practice to decide whether to activate him or not, Elway said he didn't want to burn the upcoming bye week during that window, so Lock won't return to the practice field until Week 11.

Not that any of this will prevent Elway from grabbing another QB next year.

Taking Jimmy Clausen in the second round in 2010 didn't prevent Panthers GM Marty Hurney from drafting Cam Newton No. 1 overall the following season.

When Brett Favre was penning his Hall of Fame career and returning the Green Bay Packers to prominence in the 1990s, GM Ron Wolf was stamping his own ticket to Canton with his scouting philosophy on QBs: There's room for only one to start but you can never acquire too many.

In Favre's peak years, Wolf selected a quarterback in seven of eight drafts between 1992-99, not only to keep the game's premier passer on his toes but to polish the newbies for roles as a backup or trade bait.

Among the extra arms he acquired were Ty Detmer, Mark Brunell, Matt Hasselbeck and Aaron Brooks, all of whom became starters elsewhere.

Since drafting Tom Brady in the sixth round in 2000, Bill Belichick has drafted 10 more quarterbacks even as he and Brady have won six Super Bowls together.

Among them are Jimmy Garoppolo and Jacoby Brissett .

Garoppolo is 16-2 as a starter and he has the 49ers off to an 8-0 start, the NFL's only unbeaten team outside New England, where Brady also is 8-0.

Brissett has prevented the plunge so many predicted for Indianapolis after Andrew Luck's shocking retirement last summer, and he has the Colts (5-2) atop the AFC South.

While Lock awaits his turn, Allen gets his first start Sunday since leading the Razorbacks over Kansas State in the Liberty Bowl on Jan. 2, 2016.

That came 66 days before Manning called it a career and sent Elway on an unremitting search for a worthy successor as he shuffled through Mark Sanchez, Trevor Siemian, Paxton Lynch, Brock Osweiler, Keenum and Flacco.

As Elway said at last year's NFL scouting combine, "Believe me, I'm not done swinging and missing. Misses don't bother me. We just have to figure out a way to get it right. That is what we are working on."