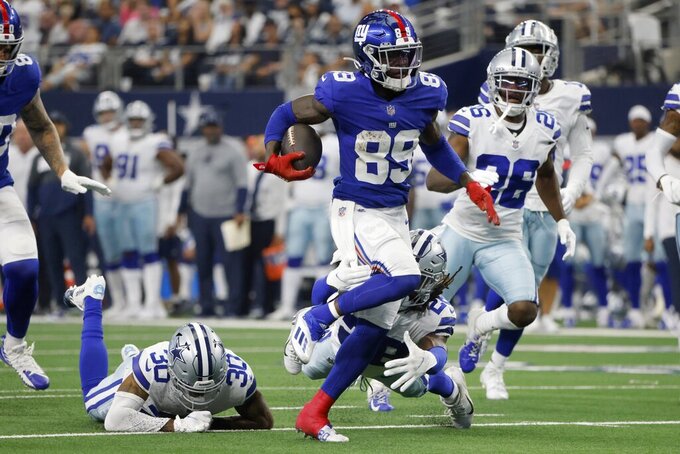 Ja’Marr Chase sure has adjusted nicely to the NFL ball.

Chase, who blamed his preseason drops on getting accustomed to the size and color differences between footballs used in college and pro, is the leading contender at the halfway point of the season to be voted the NFL's Offensive Rookie of the Year.

Chase leads the league with six catches that gained at least 40 yards, ranks third in receiving yards and is tied for fourth in receiving touchdowns. His start is even more impressive considering the LSU star opted out of the 2020 college season amid the coronavirus pandemic.

“It’s rare for guys to come in and make an impact like he has at the wide receiver spot this early,” Bengals offensive coordinator Brian Callahan said. “The skill of the (defensive backs) and the technique and the timing is so different than college. Whether he’s just naturally got it or his time away helped him, who knows? But he showed up ready to roll, and once he got his feet under him, he really hasn’t looked back.”

Chase has slowed down recently, though.

After torching Baltimore for 201 yards and a score in a Week 7 romp, he’s been held to nine catches for 81 yards and a touchdown the last two games against the New York Jets and Cleveland. Not coincidentally, the Bengals (5-4) lost both.

“I would say it’s nothing crazy defensively people are doing with Ja’Marr,” Callahan said. “They’re just aware of him now. He’s having a good year. They’re trying to stay on top of him and not get beat deep. But I would say the coverage specialties haven’t really shown up yet. We’ve played some good corners, too, that’s part of it. But the defense is trying to keep a roof on the passing game.”

Here’s a look at the league’s other top rookie receivers:

The sixth overall pick has 56 catches for 496 yards and three touchdowns despite the Dolphins (2-7) shuffling between quarterbacks Tua Tagovailoa and Jacoby Brissett.

Waddle is still looking for his first 100-yard game but has at least four receptions in seven of nine games. The former Alabama standout has returned six kickoffs for 110 yards.

The 2020 Heisman Trophy winner and 10th overall pick leads the Eagles (3-6) with 38 receptions for 537 yards and two scores. Another former Alabama star, he has been like most rookies: inconsistent. He has two 100-yard games and three with less than 30 yards receiving.

“I can still grow,” Smith said. “I think there are some things that I could have done better. Just continuing to attack, watch the film and get better from it.”

The second-round pick from Purdue, No. 49 overall, ranks third on the Cardinals (8-1) with 34 catches for 352 yards and a touchdown. He’s been more productive than fellow rookie Elijah Moore, drafted 34th overall by the New York Jets.

Rondale Moore also has 61 yards rushing, 133 yards on punts and 145 yards on kickoffs.

“You’ve got to contain him,” said Jacksonville Jaguars coach Urban Meyer, whose faced Moore earlier this season and in college, when he torched Ohio State for 252 all-purpose yards and two touchdowns as a freshman in 2018. “He destroyed us that one year.”

The Giants (3-6) drafted Toney with the 20th overall pick, five spots ahead of where Meyer was hoping to land the former Florida speedster. But Toney’s time in New York has been far from smooth.

He’s had two good outings, missed one week and barely played in three other games. He was at his best against Dallas in October, catching 10 passes for 189 yards. He has 28 receptions for a team-leading 352 yards on the season.

“I think you can see how dangerous he can be with the ball in his hands and making guys miss, staying on his feet, extending plays,” Giants quarterback Daniel Jones said. “I’ve got to continue to focus on doing that, getting him the ball.”

The last receiver selected in the first round, Bateman’s NFL debut with Baltimore (6-2) was delayed by groin surgery. The former Minnesota standout has 12 catches for 161 yards in three games, including a pair of highlight-reel receptions in a 34-31 overtime win against Minnesota on Sunday.